The anisotropic synchrony convention is a proposed solution to the starlight problem put forward by Dr. Jason Lisle. It is basically the Omphalos hypothesis mixed with some vaguely correct special relativity. Lisle's proposed convention makes use of the philosophical (and non-falsifiable) notion that the speed of light may be anisotropic - i.e., that it may not be constant in all directions. This idea was published in the creationist journal Answers Research Journal in September 2010.[1]

To get around the starlight problem, Lisle proposes that the speed of light in one direction is infinite, with the speed in the opposite direction being half its established value. Although counter-intuitive and odd, this does have some basis in actual physics. Just as we could view the entire universe as if the Earth does not move without violating any known laws of nature, we could view special relativity as if there is one-way infinite light speed.

However, in both cases calculations become needlessly complicated, going against Occam's razor, and would represent a highly questionable version of the universe, going against notions of scientific realism for the sake of some glaringly obvious special pleading.

The "one way" speed of light[edit]

To better understand what Lisle is on about, consider a thought experiment about measuring the speed of light. If you wanted to measure the speed of light in one beam going from A to B you would need two clocks that are perfectly synchronized.[2] 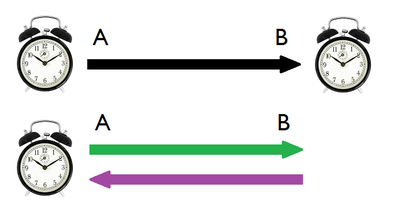 This would seem intuitively easy given that we can do this for cars travelling between cities or sprinters on a racetrack. However, to fully take into account the relativistic effects and measure the speed of light with reliability, a convention must be introduced to determine how to synchronise the clocks. Naively, one could say that you would synchronize your clocks at point A, then walk one clock over to point B. You stop clock A when you fire off the photon and stop clock B when the photon hits. You carry clock B back to clock A and compare the two times (or send a message some other way), and this then gives you the one-way velocity of light.

Here, relativity rears its ugly head. The process of moving one clock to point B necessarily means that the two clocks will run at different rates while they are being separated and thus will no longer be synchronized when the photon is fired. In an isotropic framework you would say they drifted apart because they had relative velocity; in an anisotropic framework you would say that they drifted apart because they were separated by distance (although the effect is minimal at low speed, this still happens regardless of how fast they moved apart).

Any attempt to resynchronize the clocks by calculating how much they should have drifted apart over the trip will require you to, in essence, pick how you think light behaves: if you think it travels at equal speed in all directions, you adjust your moved clock one way; if you think light does not travel at equal speed in all directions you make a different calculation and get a different result. The experiment itself cannot tell you which choice is correct, as both frameworks produce the same experimental observations. Thus, this "one way" speed of light from A to B is undefined. We can, however, successfully measure a "two way" speed of light where it travels from A to B before being reflected back to A; this requires only one clock and the problem of synchronizing two definitions of time disappears. Simply measure the time it takes for light to bounce back, double the distance, and you arrive at at a reliable value for the average speed of light over the closed loop completely independent of the problem posed by clock synchronization.

Most scientists working in the field accept an isotropic convention, that light moves in all directions equally. Although it cannot be proved, exactly, this is considered a reasonable assumption for a few reasons:

Jason Lisle, however, thinks these reasons are trumped by the fact a new convention could help him overcome a major problem for young earth creationism.

The general premise on anisotropy[edit]

The highly anticipated paper was finally released on September 22nd 2010[3], and it didn't take long for people to spot the problems.[4] The basic outline of Lisle's premise is as thus:

Lisle's real argument, the one that the math has just been softening you up for, is this: to show that the Bible even has a 'starlight problem', Lisle argues that one must first prove that the Bible was not written using an anisotropic synchrony convention (ASC), which does allow for distant starlight hitting the Earth on the same day the stars were created. Since the observed universe appears identical, it trades one problem (God creating the stars and their light in transit) with a different problem (God creating a universe with artificially aged time-dilated stars).

The above issue isn't really a problem for physics, nor is it original to Lisle. There is currently no consensus that the one-way speed of light is a convention, but the conventionalists are acknowledged to be ahead in the fourth quarter. Relativity, and the Maxwell equations that underpin it, have been recast into forms consistent with other synchrony conventions, should anyone desire to make use of them. Almost no one does, as the new forms are horribly and unnecessarily complicated—if the one-way speed of light is a convention, it's much easier to choose the simplest (always equal to c), though it may turn out that some classes of problems might be more easily solved with a different convention.

Lisle has appropriated the conventionalist position to argue that when coming towards an observer, light can be assumed to have an infinite speed—but when traveling the other way it can be assumed to move at only half the accepted speed of light—which is also not original to him. This would allow distant starlight to reach Earth by Creation Week but still allow experiments to show the speed of light as c, and still be consistent with relativity. His argument is that Genesis is written from the point of view of this synchrony convention.

It's important to emphasize that synchrony conventions are mainstream, though obscure, physics; the problem has been discussed for over 70 years, and arguably (by Poincare) before relativity was invented.

One of the main problems with ASC, as a proof that there is no starlight problem in creationism, is that the use of a particular convention doesn't necessarily mean that the reality changes to match it. There are numerous examples where such conventions are chosen and they don't necessarily match reality - the conventions don't follow scientific realism.

This isn't just limited to coordinates. It works for what is known as the "principle of least action", which states (in a short, pop-science sense) that particles will travel freely over the path of least resistance or least time. This principle underpins a lot of mechanics, and even has been applied in relativity and quantum mechanics. Much like a coordinate system or a synchronisation convention, the principle of least action is mathematically synonymous with various other laws, specifically Newton's laws and equations of motion. However, if taken literally the principle of least action - unlike differential equations of motion - would suggest that particles in reality are somewhat self-aware, and make decisions about their future paths and are therefore able to, in a sense, "choose" their path. Even though this is a mathematically valid expression, and makes excellent predictions of reality, no one assumes particles in reality do this.

Lisle's reminder that the anisotropic convention exists doesn't necessarily mean that there really is a one-directional speed of light that is infinite, or near infinite. Indeed, to do so would introduce significant violations of Occam's Razor.

The anisotropic synchrony convention (ASC) is a perfectly acceptable, albeit obscure, sub-branch of special relativity; it results in the same observed universe.

There have been misconceptions that Lisle has proposed a geocentric anisotropic synchrony convention (light travels infinitely fast towards Earth, at other speeds elsewhere). This is not what Lisle proposes; he proposes that, for anyone anywhere in the universe, light travels infinitely fast towards them and at the speed of c/2 away from them. It may seem bizarre, but special relativity allows it.

The problem with Lisle's paper is not the ASC. The ASC is, well, the distraction while Lisle pulls his sleight of hand elsewhere. The sleight of hand is this: Lisle is proposing that the entire universe was created about 6,000 years ago ("everything in the universe was made in the span of six days [...] this creation happened a few thousand (roughly 6,000) years ago [...] God tells us that the stars were created on the fourth day to give light upon the earth" Lisle 2010) with the artificial appearance of age ("Just as Adam was created mature, needing no time or process to reach adulthood, so was the universe" Lisle, 2010); Lisle generally does not object to the Omphalos hypothesis.

The only artifact of an universe created 6,000 years ago with the appearance of artificial age that Lisle objects to in his paper is light in transit ("I suggest that it is reasonable (and in fact necessary) to suppose that distant starlight did in fact originate from the star, and was not created in transit", again from Lisle 2010).

However, this bizarre ASC which Lisle uses to try and make a young universe look like an old universe has its own set of problems. One being this: In our isotropic (To be pedantic: it might be any of the infinite possible anisotropic universes, since they all appear identical) universe, if there were a giant mirror 5,000 light years from Earth, and one looked in that mirror, one would see the Earth as it looked 10,000 years ago. Lisle's particular ASC universe is observably different: In Lisle's ASC universe, that mirror will not show an observer anything (it will show us whatever Lisle interprets as being "formless and empty") for the next 4,000 years. Indeed, distant stars not directly behind Earth (as seen in the mirror's reflection) would appear in this mirror before our own sun would in the ASC universe.

Furthermore, objects farther away appear older; as just one example: stars in very distant galaxies have no heavy elements. While accepting that time slows down with distance would at first glance appear to solve this problem, if we also accept Lisle's statement that the universe is only 6,000 years old, one is left wondering why objects millions and billions of lightyears away were millions and billions of years younger than closer objects a mere 6,000 years ago.

The isotropic way of seeing the anisotropic universe proposed by Lisle results in a universe where only the earth was created 6,000 years ago, with objects farther away created sooner. This, however, yields yet another stupid conclusion: Observers elsewhere (not that we were there to show him wrong) in the universe would have seen a darkness (or whatever passes as "formless and empty") centered where the Earth would be; this darkness would contract (become smaller and smaller) and the final visible star for other observers would have been our sun.

In 2014, after probing from ex-creationist David MacMillan, Lisle admitted that mapping his model onto an isotropic convention "implies the progressive creation of galaxies from the edge of the observable universe toward us over a period of many billions of years."[5] Thus, Lisle actually advances an old-universe, young-earth progressive creationism, but masks this for his young-earth audience using the trick of anisotropic synchrony to claim this is equivalent to a recent creation.