From RationalWiki
(Redirected from Non-sequitur)
Jump to navigation Jump to search
Similar to a formal fallacy — when an argument's formal logical structure is broken. 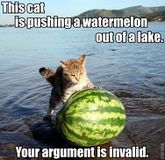 Non sequitur is a Latin phrase meaning "it does not follow". It means that the conclusion reached does not follow from the premise(s). Oftentimes, examples of non sequitur arguments are hilariously disconnected, but those encountered in the wild can be subtle and may not be easily uncovered. The reason that such arguments are fallacious in logic should be fairly obvious.

Non sequiturs can also be more subtle than the above, such as the following one, formulated by Alan Turing:

P1: If each man had a definite set of rules of conduct by which he regulated his life he would be no better than a machine.
P2: However, there are no such rules.
C: Therefore, men cannot be machines.

While this may seem plausible on the surface, it is still a non sequitur because 1) the first premise says nothing about whether or not men can be machines, but whether they would be better than (or, depending on how you unpack this term, greater than, more than, beyond, or simply more capable than) machines if they had definite rules of conduct by which they regulated their lives; 2) it ignores the possibility that men could be machines without such definite rules and 3) the second premise is saying something so strong that it is false. Therefore, the conclusion does not follow from the premises nor would it be verified if it did. Traditionally, however, this syllogism is accepted as valid in this altered form:

P1: If each man had a definite set of rules of conduct by which he regulated his life he would be no better than a machine.
P2: However, most such rules that there are are ones that men themselves have made, and machines do not make rules beyond those they are built to follow.
C: Therefore, men are better than machines.

Another example can crop up among the careless of faith:

Here, the fallacy is that P1 and P2 may in fact be correct, but C is not a valid conclusion based on P1 and P2. It does not follow that the Bible must be correct because one person finds that Jesus is their savior, even if to a believer this seems like the case. More specifically, this is affirming the consequent, and is also a circular argument.

A subtle but easy use of the fallacy is related slightly to belief in belief. It could be formed like this, which also contains an example of circular reasoning if you relabel the syllogism:

P(1): Religion gives great comfort to people and causes them to do good things.
P2/C1: These people are comforted and are good people.
C(2): Therefore God is real.

The non sequitur here is a failure to distinguish between what the act of believing can accomplish, and the (almost) completely unrelated question of the truth value of that belief. Someone could hold a belief in God and do good things (P1) but, because this is due to the belief itself, their good works and feelings of comfort (P2) would still be true whether God exists or not. Without external evidence to say otherwise, you cannot tell the difference between someone being comforted because God exists, or because they just believe God exists. (If you think that's not so, replace "God" above with Shiva or a god from another religion and see if that makes a compelling argument for that religion, or invert the language and see if that makes a compelling argument against any religion.) In short: the premises say nothing about the existence of God, only that some people believe in it.

However, it is simple to reword the syllogism so that it does have premises that say something about the existence of God:

P1: Several religions and spiritualities have the existence of some form of god(s) as an article of faith.
P2: People tend not to keep faith in un"real" things indefinitely.
C: Therefore, whatever form of God is believed is real for whoever believes in it.

The Future of God by Deepak Chopra and Everybody Is Wrong About God by James A. Lindsay (Ph.D.) are based on this rewording of the belief in belief syllogism to have premises that say something about the existence of God, though the latter only explicitly mentions the first kind of gods:

And any premise about what the act of believing can accomplish has disappeared into thin air as well, but it was never really relevant to the demonstrandum anyway.

See the main article on this topic: Ad hominem

P: You're a beautiful woman.
C: Therefore you're wrong.

The (ne quidem) non sequitur here is obvious: your status as a beautiful woman in no way affects the logical soundness or truth value of your arguments. One can be the most odious person in the history of humankind and yet make logically sound arguments based on demonstrably true premises.