From RationalWiki
(Redirected from Homunculus fallacy)
Jump to: navigation, search 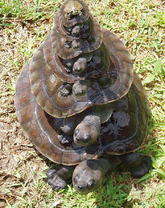 This is what Creationists actually believe.

Aristotle posits an argument that shows an infinite regress to result in a contradiction. Formed using predicate logic, the proof reads like this:

Let's define the terms. Nx⊃Cx reads "if x is a number, then x is countable." Cx⊃Tx reads "if x is countable, then x is traversable." Ix⊃~Tx reads "if x is infinite, then x is not traversable." ∃x(Nx·Ix) reads "there exists an x such that x is a number and x is infinite," and is a supposition for the sake of argument. Now, 'countable' and 'traversable' need to be defined. Aristotle regarded numbers as made up of composite parts. If Aristotle had thought of the number 42, he would have thought that it was composed of 42 individual parts. This is what he means by 'countable'. 'Traversing' is the act of counting. So, if a number is countable, then counting the individual parts and finally reaching the number is traversing, which means the number is traversable. Aristotle says that if a number is truly infinite, it can't be traversed because the end of the number can't ever be reached. Given the definitions of the terms and the logical validity of the argument, Aristotle concluded that there exist no infinite numbers.

One example of a viciously infinite regression arises in intelligent design creationism, which states that there are problems in the theory of Darwinian evolution by natural selection which can only be resolved by invoking a designer or first cause without proposing a solution to the immediate question, "Who designed the designer?" Despite that, the response to this is an example of special pleading: creationists assert that every being needs a cause, but God is an eternal presence which did not need a cause. No evidence for this has ever been presented for peer review, or critical analysis of any kind.

The "Turtles all the way down"

writing on alchemy, De Natura Rerum (1537),[3] referring to what later became known as sperm after the invention of the microscope. In folklore and in literature, homunculus often refers to a miniature fully-formed human.[3]

In the Eastern Bloc, homunculus has referred to attempts to remold people to be "without sexual, high intellectual or high emotional 'centres'".[4]:178[5] More recently, Daniel Kalder has used homunculus to refer primarily to the heads of puppet states who felt compelled to follow the party line while at the same time not showing any innovation from the party canon.[6] Stalinist examples include Khorloogiin Choibalsan

This logic-related article is a stub.
You can help RationalWiki by expanding it.
Retrieved from "https://rationalwiki.org/w/index.php?title=Infinite_regress&oldid=2183521"
Categories:
Hidden categories: