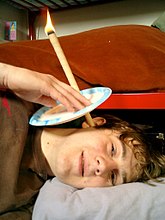 Look at all that residue and all those toxins! …Oh, it's actually all residue from the candle itself. Never mind.

The performance involves laying the victim on their side and burning a special hollow candle over their ear canal. The heat is supposed to draw the impurities from the ear out of the canal and into the base of the candle. Tympanometric measurements in an ear canal model demonstrate that ear candles do not produce negative pressure.[1] When visible residue is seen at the base of the candle after the process the practitioner and wooee assume that wax was removed from the ear canal by some sort of quantum warm air currents.[Note 1][Note 2] This residue is, of course, simply burnt wax from the candle that has run down the inside.

While one might think "it's harmless and cheap, so who cares?", the procedure comes with potential downsides — the most obvious is that hot wax from the candle might drip into the ear, burning the victim. There are also all the usual hazards associated with playing with fire indoors.[Note 3] There is no need for an alternative method to removing excess cerumen buildups. You can break down cerumen by using oil — commercial ear wax removal oils typically use peanut oil, although any vegetable oil will do the job. If you have a large deposit that isn't shifting, you can typically have it flushed out with water in a few minutes by a nurse. Or you can flush it out yourself with a bulb you can buy OTC at your local drugstore. You very rarely need surgery for this, and that's only if they've tried flushing it out already. Talk to your doctor.

Contra-indications include perforated eardrums, worsening impacted cerumen and allergies to any of the ingredients in the ear candles. The depth at which the candles are inserted into the ear canal varies and the practice is largely unregulated.

The purported benefits of Hopi ear candles claim to aid include (but are not limited to):

Some cranks claim that ear candling was practiced by the Hopis in a sad appeal to exotic mysticism. This has been denied by the Hopi Tribal Council. In fact, companies have been asked not to use the name Hopi in their ear candle products.[2]

The Hopi do not appear to have had candles before contact with Europeans.