as part of its territory and by the POLISARIO Front

[note 1] as the "Sahrawi[note 2] Arab Democratic Republic". While most of the world does not recognize Morocco's claim, the POLISARIO claim is not universally accepted either. As for the actual situation on the ground — the two sides currently control parts of the territory, with most major cities (as well as almost all of the coastline) in the hands of Morocco, separated from the POLISARIO-controlled areas by a wall.

Until 1975, Western Sahara was one of the last bits of Africa controlled directly by a European power, namely Franco-ruled Spain. The people of Western Sahara were not happy with this and thus formed numerous groups fighting for independence; the most notable of these was (and still is) the POLISARIO Front

). When Franco died, there was a rush for Spain to get out of Western Sahara. Thus the territory was rather unprepared for independence (which had often happened with newly independent nations in Africa or South America). Morocco (which had been colonized by Spain and France) claimed ancient rights to the territory and proceeded to partition the territory in cooperation with Mauritania. POLISARIO was not happy with this state of affairs and, with the help of Algeria (who wanted to get back at Morocco for — you know, politics), set up a government in exile (in a refugee camp in Tindouf, Algeria) and continued the struggle for independence — now against Morocco. By 1979 Mauritania had withdrawn from its part of Western Sahara. The whole territory was claimed by Morocco, which took away the most valuable land (and almost all natural resources) from the Sahrawis, constructing walls to safeguard their conquests for security reasons.Do You Believe That? 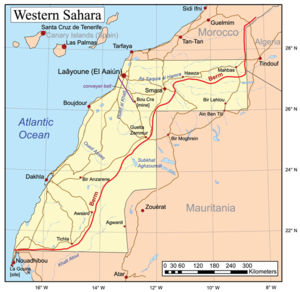 The current wall: Sahrawis are forced to live in abject conditions in camps or Bantustans east and South of the Apartheid separation wall

Attempts at solving this mess[edit]

Part of the tragedy of the whole conflict is that there is a seemingly obvious way of solving it. So obvious indeed that it was first proposed by Spain when it effectively relinquished control of the territory in 1975.[note 3] The proposal is roughly this: Let the people of Western Sahara decide who they want to belong to and install a democratically elected local government. Of course, as the question of who exactly constitutes the people of Western Sahara is the one question most likely to influence the outcome, there is considerable disagreement between Algeria (the main backer of POLISARIO) and POLISARIO on the one hand and Morocco on the other hand. James Baker (who served in the administrations of Bush Sr. and Reagan) came up with several peace proposals, the first of which was rejected by all sides, the second by the Algerian / POLISARIO side, and the third by the Moroccan side. Frustrated, he decided it was all for naught and resigned his post as the special envoy of the United Nations Secretary-General. Since then, there has been no serious attempt at anything but the prolongation of the status quo.

Concerning principles of international law,[note 4] the UN, African Union, World Court, and a broad consensus of legal scholars of international law do not recognize Morocco's sovereignty over the area. Unfortunately, geopolitics does much to circumvent laws, with former White House Spokesman Jay Carney affirming that President Obama believes "Morocco's autonomy plan is serious, realistic, and credible. It represents a potential approach that can satisfy the aspirations of the people in the Western Sahara to run their own affairs in peace and dignity". In other words, the de facto conquest of territory receives a blessing from the US and France (who blocked the UN in 1991 for enforcing a series of resolutions demanding that Morocco provides the people of Western Sahara the chance for self-determination through the deployment of the peacekeeping force MINURSO).[1]

Crimes against the Sahrawi people[edit]

Morocco has engaged in brutal ethnic cleansing against innocent Sahrawi men, women, and children, mining their homes and constructing illegal settlements on their land.[2][3] Morocco also engages in settler colonialism and treats ethnic Sahrawis as second-class citizens in a brutal Apartheid system.[4] Despite all this, the world stands idly by as the Sahrawi people are murdered because they are afraid of criticizing Morocco. IKEA even recently pressured the government of Sweden, a prosperous, Western, democratic nation, to withdraw recognition of Western Sahara because IKEA wanted to build a furniture store in Morocco.[5][6] Not needing IKEA's encouragement, Trump found his own reason to throw the Sahrawi under the bus.[7]