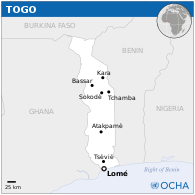 The Togolese Republic is a nation in West Africa with a mix of Catholics, Protestants, Muslims, and Vodousants. It is currently undergoing democratization after being run for 38 years by a single pro-American, pro-French dictator. (That process is being spearheaded, surprisingly enough, by that dictator's son.)

During the heyday of the early British Empire, French colonial empire, and Iberian empires in the Americas, coastal Togo was a major trading outpost for slaves. Later, during the Scramble for Africa, Togo fell under the rule of the German Empire. After World War I, France annexed Togo, and the country eventually gained its independence in 1960. Like other African nations, Togo found itself forced to pick sides during the Cold War. Under the leadership of Gnassingbé Eyadéma, who rose to power with a military coup, Togo became a pro-American and anti-communist dictatorship. He remained in power until he died in 2005. He was succeeded by his son, Faure Gnassingbé, who was elected president.

Before the Portuguese arrived in the 15th century, modern-day Togo was already a melting pot of West African cultures. The Ewe, Guin, and Mina people settled in the south, the Kabye and Bassar in the north, and nomadic Fula people often came through with their herds.

In the 15th century, the Portuguese arrived and established trading posts along the coast, from Ghana to Benin. This led to the entire region being named "the Slave Coast," after the principal commodity.

In 1884, as part of its attempt to compete with the bigger European players, Germany established a colony in Togo called Togoland. At the time, the colony was about half again as large as the current country, as it included the Volta region of Ghana. Germany decided to make Togo a "model colony" and invested heavily in infrastructure, including roads and railroads still used today. When World War I broke out, British and French troops invaded and, with no German troops to defend it, quickly overran it. After the war, Togoland was split, with the Volta region going to Britain and the rest going to France under a League of Nations mandate. 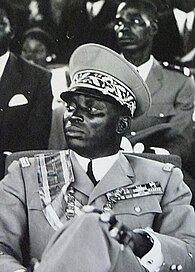 The French period can be best described as "neglectful." No new infrastructure was built, and the French, after World War II, quickly began devolving power to the local government. Two parties emerged, one pro- and one anti-French. In 1960, France granted Togo full independence, and an election was held to determine who would lead. The leader of the pro-French party (Nicolas Grunitzky) was disqualified from running for president, and Sylvanus Olympio (the leader of the anti-French party) won with 90% of the vote.

While often remembered in Togo (especially by opponents of the current ruling party) as a wise, beloved democrat, Olympio soon began showing autocratic tendencies, including jailing opponents (including Grunitzky), banning political parties, and using a semi-private militia to terrorize opponents. In 1963, several non-commissioned officers rose up in independent sub-Saharan Africa's second military coup.[note 1] Olympio was shot as he ran to the United States embassy for sanctuary, supposedly by one Étienne Eyadéma (later named Gnassingbé Eyadéma). The NCOs then put Grunitzky in power, but those who supported Olympio began a multi-year campaign of protests, sabotage, and terrorism to bring down the regime. In 1968, now-Colonel Eyadéma launched another coup and took over as president himself.

Eyadéma then proceeded to turn Togo into a one-party state. He also allowed only one federation of trade unions. Rising phosphate prices allowed Eyadéma to develop the economy, but the economy tanked again when the phosphate prices dropped. Sylvanus Olympio's son, Gilchrist, continued to lead the opposition in exile throughout this period, including launching terrorist attacks from Ghana. 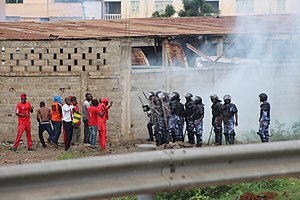 In the early 1990s, a democratic movement erupted and nearly set Eyadéma aside. The struggle that followed culminated in an attack by the military on the pro-opposition Prime Minister's office. Eyadéma was forced to allow other parties but otherwise kept his iron grip until 2005, when he died. When he died, he was the longest-serving head of state in Africa.

The military rushed to put his son, Faure Gnassingbé, into power. The international community protested, and horribly flawed elections followed, confirming Faure as the new president. Knowing how weak his position was, he immediately set about creating a unity government and reaching an accord with the democratic opposition. In 2006, he began a consultative process with the opposition and convinced the head of one of the main opposition parties to work with him. Faure and his party then went on to win four more increasingly legitimate elections (two legislative, two presidential) and brought Gilchrist and his party into the government with them. Faure has focused heavily on diversifying Togo's economy and building economic prosperity. Still, it is also well-known that he, his family, and his friends have embezzled a great deal of money from the government.

Togo is hot. Not Saharan desert hot, not kill-people hot, but "Jesus, why on earth are we wearing suits at this outside event?" hot. Typically it's in the high 80/low 90s (low 30s for those with rational measurements). Half the year, it's hot and wet; the other half, it's hot and dusty.

One of the stranger things for those from more temperate latitudes—the sun rises and sets at the same time every day, no matter the date. Moreover, that sunrise and sunset are fairly quick, and it can go from daylight to deep dark in minutes.

Being an impoverished country, there is a lack of many of the cultural amenities most expatriates would be familiar with.

However, below the surface, there is a wealth to be found. Many renowned musicians come from Togo, most notably King Mensah, Bella Bellow, and Toofan, the latter of which is a frequent MTV Africa Music Awards nominee. Togolese artisans are also noted for their woodwork and batiks. 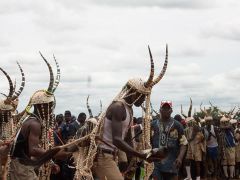 Scene from the Yam festival

As the country has roughly 40 ethnic groups, each with its own traditional leaders and festivals, the country always has a reason for an elaborate festival somewhere. These festivals can celebrate local religious traditions, a new leader, or a particular harvest. At these festivals, visitors can watch traditional dance and see local history re-enacted. (Sometimes, this can be uncomfortable, as when it becomes apparent that the men in blackface represent some enemy ethnic group.) At many of these festivals, you can see amazing costumes and acrobatics.

In West Africa, the Togolese are also renowned as excellent chefs. It helps that the country has been influenced by so many other countries, taking many of the best ideas from each. French pastries and pizza are both plentiful. As it's a coastal country, quality, fresh fish can be found in several restaurants near the beach. Most expatriates' favorite dish is peanut butter soup (which is better than it sounds), usually served with fufu (a starchy mass much like a filling, gluey mashed potatoes). This dish is not unique to Togo, as it is served all over West Africa, but a particular Togolese/Beninese innovation is to use a fresh cow's milk cheese called wagash/wagasi (much like paneer) for the protein.

Togo is one of the few countries where animists still outnumber followers of Abrahamic/Eastern religions. 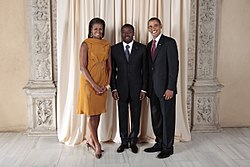 Faure Gnassingbe with the Obamas.

Eyadema was, throughout his reign, a highly repressive dictator. Freedom of the press and freedom of assembly were non-existent. He put his sons in various positions of power, including the paratrooper commando unit, which often functioned as Eyadema's goon squad. The government's reconciliation commission has said that the paracommando unit was responsible for killing protesters. Elections were often held but (with a notable exception in the early nineties) either uncontested or rigged. The 2005 "election" that brought Faure to power was the nadir for human rights in the country, as the army again killed protesters, ballot boxes were stolen, and thousands fled to neighboring countries for asylum.

Since that time, Faure has slowly loosened the restrictions imposed by his father. The military no longer has a police role,[note 2] the written press is near-completely free,[note 3] and gatherings are allowed as long as the government is given enough advance warning.

In contrast to other countries in the region, religious liberty and tolerance have never been a problem in Togo. Vodousants complain that their traditional beliefs are sometimes discriminated against in the culture and on TV, but Muslims, Christians, and Vodousants all live together throughout the country. On the other hand, all three groups agree on denouncing homosexuality, which is technically criminal in Togo.[note 4]