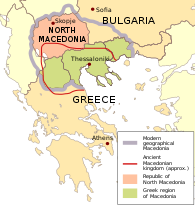 North Macedonia, formerly Macedonia or the former Yugoslav Republic of Macedonia (FYROM), is a nation in the Balkans north of Greece. It gets its name from the historical Macedonia, a transnational region in the Balkans whose definition and borders have varied greatly throughout different historical periods. If this doesn't give you an idea of what's ahead, you don't know anything about the Balkans, so keep reading.

The first incarnation of Macedonia occurs in antiquity. It was the homeland of the Ancient Macedonians, whose most well-known spawn—Alexander the Great—conquered most of the known world of his time before dying young. The Macedonians originated as a northern Hellenic tribe before eventually developing a kingdom, which was seen as primitive by the more politically advanced poleis of the south, exactly because, to them, civilization was characterised by living in a polis. This disdain for the Macedonians turned into resentment when the Macedonians became the dominant power in Greece. In spite of political differences with the other Greek powers, Alexander the Great and the Ancient Macedonian empire spread Hellenic civilization (which merged with local cultures and evolved into Hellenistic

culture) across a vast amount of territory, mainly in the Middle East. The Hellenistic era that followed Alexander's conquests spread a series of (pre and proto)scientific ideas, philosophy and arts that formed the basis of ancient Western Civilization, as they were largely adopted by the Romans following their conquest of most of the Hellenistic states. We also have the Macedonians to thank for the Library of Alexandria, Hellenistic Egypt and Cleopatra. Alexander's successors decided they would be better off to rule the vast empire by each taking a part for themselves, so it crumbled into a large area bound together by a common language (Koine Greek which literally means Common Greek).[1]

The Roman Empire, the eastern half of which would later be labeled by historians as the Byzantine Empire, once again became Greek-oriented. Under the Eastern Romans, various civilizations mixed and a number of foreign tribes invaded. One of these, the Slavs, arrived in the Eastern Roman Empire from their homeland near the Carpathian Mountains. These tribes settled as far south as Thessaly, assimilating the indigenous people after multiple conflicts. In some areas (such as in present-day Serbia, Bulgaria and Macedonia) they retained their Slavic language, while in other areas (such as in Albania, and central and southern Greece) they retained the indigenous language. The boundaries of the-then Macedonia were constantly changing. In the hundreds of years of the empire's existence, there was a Macedonian dynasty and at times the empire held a Macedonian province (Theme Macedonia) just as they had two Macedonian provinces (Upper and Lower Macedonia) prior to the fall of the West. Therefore the name "Macedonia" remained in continuous use as a geographic name.

In 1453, the Ottoman Empire conquered much of the Balkan Peninsula. Just as in Western Europe, widespread discontent with foreign rule (in this case, Turkish) led to the rise of various nationalist independence movements. Inspired by the events of the French Revolution, the Serbs were the first to launch an uprising. Not long after, supported by the West and Philhellenes (western Europeans who romanticized Classical Greece), the Greeks too launched an uprising. The Bulgarians, aided by the Russian Empire, also gained their independence. The people of Macedonia, without an urban intelligentsia, had not yet developed their own nationalist movement. This meant Macedonia was fair game for these new nation-states.

Throughout the 19th century, Serbian, Greek and Bulgarian interests intersected in Macedonia, each seeking to win over the population and expand their newly-formed nation-states. The local population readily adopted these new nationalities; often each of the three identities were represented in a single village, town or city (and even in a single family). The Greek idea soon lost ground, as some of the local population spoke a different language and had a different identity. However, the competition between Serbs and Bulgarians persisted because the South Slavs are all quite similar and part of the South Slavic dialect continuum, with no definite boundary between their languages.[2][3] With the urbanization of Macedonian cities and an increase in classical education, a small number of formerly ethnic Bulgarian-identifying intellectuals (including Goce Delchev, Krste Misirkov) began publicly rejecting all neighboring nationalist movements, and instead began identifying as "Macedonians".

The people of the Balkans fought in sequential conflicts known as the Balkan Wars that were the prelude to World War I. Greeks assumed control of part of Macedonia by first defeating the Turks. The Bulgarians and Serbs each kept smaller parts of Northern Macedonia, the territory previously known as Moesia, Dardania or Upper Macedonia.[note 1]

By the late 19th century, the Bulgarian nationalist movement began gaining ground in Macedonia and the Serbs needed to counteract it or lose all claims to the territory entirely. The Serbs went from suppressing the Macedonian nationalist movement to promoting it vigorously, a move which firmly secured their hold over that part of Macedonia. During World War II, the Macedonians joined the Serbs, Croats and Slovenes in liberating Yugoslavia from the Axis (of which Bulgaria was briefly a part) and became a constituent republic of the Communist state afterwards.

In Greece in the 1950s a civil war erupted between far left-wing groups (which were predominantly Macedonians wishing to unite with Communist Macedonia) and right-wing groups (monarchist Greeks). Communist Macedonia aided the communist cause inside Greece, but they nevertheless lost the war. The Greeks, with military aid from the US and Great Britain, expelled the communist forces. At the time, both the US and UK considered the existence of ethnic Macedonians "communist demagoguery":

Jump forward 50 years: the name now refers to the independent state of Macedonia whose territory occupies the northwestern half of this transnational region. The Greeks are concerned that once again, the former Yugoslav republic is threatening sovereign Greek territory. In 1991, the Socialist Republic of Macedonia declared independence from Yugoslavia. The Greeks protested on the streets of Thessaloniki against recognition on grounds that it would encourage irredentism and historical theft, despite the fact that they were as likely to be invaded by Macedonia as Lesotho or the Vatican. At the time, the former Yugoslavian government claimed they had no irredentist designs and were not claiming to be related to the ancient Macedonians. Greece issued an embargo. The embargo ended with a 1995 agreement that the former Yugoslav republic would use the "United Nations provisional term" of "FYROM" for international use and remove territorial ambitions from their constitution, and not use ancient Macedonian symbols in their government organizations. Both sides agreed to talk to find a "commonly accepted name".

The Republic of Macedonia said that Greece is being a bully and does not respect their right to self-identification. However, the former Yugoslav republic did not recognize the self-determined name of the Republic of China (in fairness nobody else does either, it's Taiwan for fuck's sake), and Greece pointed out that the former Yugoslavians had done a recent identity quick change into "ancient Macedonians" and supposedly used that to encourage irredentism: Greece's original concern.

To appease the Greeks, the country was typically referred to by its full, constitutional name - the "Republic of Macedonia" - to distinguish it from the other territories which comprise the wider region of Macedonia: one province in Northern Greece, one in Bulgaria, and a number of smaller municipalities and communities in Serbia and Albania. An alternative name for the state - the "former Yugoslav Republic of Macedonia" (FYROM) - was used by some international organizations, the Eurovision Song Contest, and Greece. They're really bad at the Eurovision Song Contest.[4] This name was formulated at the time when the Republic of Macedonia sought United Nations membership in 1993 shortly after it gained independence from Socialist Yugoslavia in 1991. Greece, which claimed exclusive rights to the use of the name "Macedonia", objected to the country's name, and thus prevented it from joining the United Nations until it adopted an unambiguous one.

Eventually Greece and Macedonia agreed to change its name to North Macedonia. Most Macedonians didn't care, failing to vote in a referendum on the renaming.[5] Whiny Greek right-wingers nearly stopped it, because clearly it's the most important issue facing an impoverished, debt-ridden, and corrupt nation.[6] But eventually everyone got bored and the Republic of North Macedonia got a new name and now everybody can ignore it for ever more.[7]

Nice flag, though. Hopefully the Greeks can shut up about it.[8]