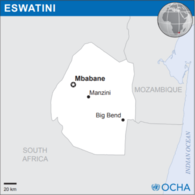 eSwatini, formally known as the Kingdom of eSwatini and formerly known as Swaziland,[2] is a small, landlocked African country located between South Africa and Mozambique. Its population comprises the Swazi people, part of the Bantu ethnic group.[3]

The people and the country both take their name from King Mswati II, as he was the ruler who the British Empire first encountered in the Nineteenth Century. Mswati II actually initiated contact with the British, hoping to gain protection from the neighboring Zulus and the Boers.[4] The British diplomatically sparred with the Boers for several decades over who would get to take Swaziland as a protectorate. During the Boer Wars, the Swazis supported the British, and they became a British protectorate. Swaziland was, however, excluded from the 1910 Union of South African colonies, as the racist white Boers didn't want to share a country with such a dense population of black Africans. That was almost certainly a blessing in disguise since that allowed the Swazis to avoid the apartheid regime the white Boers subsequently inflicted on black South Africans. Swaziland peacefully transitioned to independence in 1968. Its current king renamed the country to eSwatini in 2018, ostensibly to avoid the confusion caused by the old name's similarity to Switzerland.[5] The new name translates to "Land of the Swazis".

eSwatini is Africa's last absolute monarchy, and it is currently ruled by King Mswati III.[1] The monarchy maintains its rule by ruthlessly suppressing political dissent. Political parties are banned, and the police have broad authority to arrest for basically any reason.[6] All judiciary, legislative, and executive powers are invested in the king alone.

Adding to that stew of horribleness, eSwatini has the highest rate of HIV infection worldwide, with the virus' prevalence in adults aged 15 to 49 standing at 27.2% as of 2016.[7] As you might guess, the disease greatly strains the country's economy. As you also might have guessed, eSwatini is a developing country with a small economy. The country is mainly dependent on trade with South Africa for revenue, and its currency is even pegged to that of its more prosperous neighbor.[8] 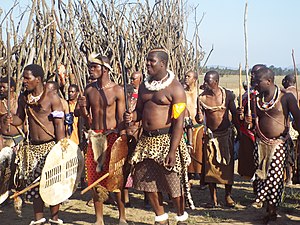 The Swazi people fled from the Cape Coast region to escape from Dutch colonists. They were embroiled in the tumultuous inter-tribal civil wars, which erupted due to tens of thousands of displaced people trying to find a new home.[1] Among those tribes were the Zulu, who were effective and aggressive conquerors. Under the leadership of King Mswati II, the Swazis managed to fend off the Zulus and establish themselves in their current region.

Unfortunately for them, the white Boers also fled from Cape Colony to establish their own republics, and the Boers attacked and oppressed the black African populations around them. With the establishment of the Transvaal state, the Swazis found themselves sandwiched between the Zulus and the Boers.[1] That's not a good place, especially since the Swazis were also between the Boers and Africa's eastern coastline. That gave the Boers a very good reason to covet Swaziland and thus gave the Swazis a very good reason to ask the British for protection.

The British didn't really give a shit about Swaziland either way, so they agreed to let the Boers take Swaziland as a protectorate so long as the Boers didn't treat the Swazis like garbage.[1] The Boers, after all, were known for treating black Africans like garbage.[citation NOT needed] When the Boer Wars broke out, the Swazis mostly stayed neutral, although many people went to work for the British. Transvaal's destruction in 1902 allowed Swaziland to become a full British protectorate.

By the standards of the British Empire, their rule over Swaziland was fairly benevolent. The Crown granted the colony self-rule in 1963, and Swaziland gained its full independence in 1968. The country was left with a constitution drafted with assistance from the British. It created a democratic parliamentary system with a Prime Minister and a Cabinet, making the King the Head of State. Sobhuza II, who had come into power in 1921, declared that the constitution was a colonial relic that did not reflect the culture of the Swazi people, and he suspended it in 1973.[9] The king replaced the constitution in 1977 with a document that made him an absolute, unquestioned monarch.

The king's authority is unrestricted by any laws, demonstrated most effectively by the unexpected 2018 announcement that he would unilaterally change the country's name. It is believed by the foreign community that the king has 14 wives and that all of them have at least one child; it's not possible to know for sure since it's illegal under Swazi law for their citizens or government to disclose any part of the king's personal life.[10]

eSwatini's king is also utterly immune from any laws, and he can commit crimes with impunity.[11] Although the country has a parliament and judiciary, none of these institutions have any ability to override the king's decisions. The parliament can only rubber-stamp the king's decrees, and judges who rule against the king may be dismissed immediately.[11] The king is additionally the only member of the country's highest court.

eSwatini does not have freedom of speech. The press is tightly controlled. There are only two newspapers available in eSwatini; the king personally owns one of them, and the other's editor is in the king's employ.[12] The government controls radio and television save for one station, which is only allowed to broadcast religious programs.

Under the Public Order Act, critics of the king may be arrested and imprisoned for up to two years.[6] The country's national police commissioner may arbitrarily detain people suspected of opposing the king's will. In 2014, activist Mario Masuku and a student were arrested for singing a protest song and still remain in prison. Their family reported being subjected to random raids and threatened with assault weapons.[13] Masuku is also denied specialized medical care for diabetes, which places him at extreme health risk.

Criticism of the government or king, no matter how benign, is classified as "terrorism" according to the country's 2008 Suppression of Terrorism Act.[6]

Freedom of association and assembly[edit] 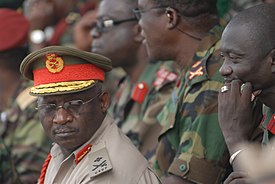 In eSwatini, trade unions were recently "deregistered", meaning that they have been effectively banned.[12] Other civil organizations must comply with harsh limitations on their actions. Political parties are also banned and have been since 1973.

People's United Democratic Movement (PUDEMO) is Swaziland's biggest opposition group.[1] Unfortunately, it happens to be banned by the government and classified as a "terrorist organization". Its current leader, Mlungisi Makhanya, frequently receives death threats, and many organization members mysteriously disappear.

Police forces in eSwatini react to political dissent with extreme violence. In 2013, the Swazi government launched a brutal crackdown against a teachers' strike, with many people arrested. Prisoners were detained in overcrowded facilities and subjected to torture and rape.[14] Serious abuses, including killings by security forces, torture, and beatings of pro-democracy activists, are rampant in eSwatini.

Citizens are allowed to live on that land, but they may be immediately and forcibly evicted if they are found to be guilty of political dissent. The government does nothing to compensate people for their sudden loss of housing. Victims are instead left homeless and forced deeper into poverty.[16] This actions happens to dozens of people each month, and their homesteads are often bulldozed to make sure they can't come back.[17] Children have their education interrupted, people lose access to food from their farms, and generations lose access to the graves of their ancestors.[18] 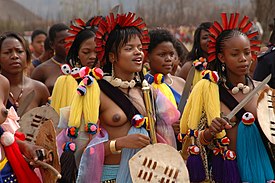 Several of Mswati III's daughters at a 2006 traditional dance festival.

Women are treated as second-class citizens under Swazi law. The 1964 Marriage Act places women at a disadvantaged status by requiring that married women acquire the consent of their husbands to enter into certain contracts, including accessing credit from financial institutions.[6] Things have gotten slightly better in recent years though. In 2018, eSwatini prohibited under-18 child marriage and ratified some international legal instruments to criminalize marital rape.[19]

"Sodomy" is illegal under a colonial-era law.[19] However, some progress is happening there as well. eSwatini held its first LGBT pride parade in July of 2018, a milestone for African LGBT rights.[20] Sadly, the story doesn't end there, as the parade received numerous threats of violence, and LGBT individuals still face daily harassment and discrimination. The parade did, however, proceed without major incident.

Part of the reason the rate of HIV infection is so high in eSwatini has to do with its cultural attitudes toward sex. Safe sex is discouraged, women are encouraged to have at least 5 babies apiece, and men are encouraged to impregnate as many women as possible.[21] This leads to much barebacking, which is just what a sexually-transmittable virus like HIV needs to flourish.

The official language of eSwatini is Swati, also known as Siswati. There are few published books dedicated to learning Swati. The only place an English speaker can hope to learn the language online is from the Peace Corps.

Swati is a tonal language, like Chinese, which means the rise or fall in pitch as you pronounce a syllable is important. If you change the pitch, you change the word you're speaking into a different word altogether. So be careful not to let your voice swoop upward unnecessarily at the end of a question.