Cyprus is an island off the southern Turkish coast, in the eastern part of the Mediterranean Sea. At the moment, it's divided into two entities: the Republic of Cyprus to the south (commonly associated with the name "Cyprus"; a member of the European Union and internationally recognized) and the Turkish Republic of Northern Cyprus (TRNC) to the north (recognized by Turkey and nobody else).

It is one of the most religious countries in the EU.[1] It is also deeply racist, sexist, and homophobic.[2][3]

Cyprus was a disaster in the European sovereign debt crisis; one must wonder how it even got into the Eurozone with an economy consisting almost entirely of Russian oligarchs who store their cash there because they'd rather store their cash in a warm place than a cold place like Switzerland.[4]

A Tale of Two Cypruses[edit] 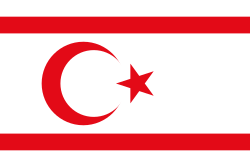 Flag of the "other" Cyprus, totally not mimicking Turkey. Nope.

This division happened in a failed Greek attempt to establish a puppet state in Cyprus, using ethnic clashes between Turks and Greeks. Turkey invaded Cyprus (using the rights given to them by the Treaty of Guarantee

, signed between Cyprus, Greece, Turkey, and erstwhile colonial power the United Kingdom) to stop this attempt and successfully overthrew the puppet state, which actually caused the end of the military junta in Greece (yay!). Yet they kind of refused (and still refuse) to leave when they were done, citing "security reasons" (boo!).[citation needed]

Northern Cyprus was founded under the Turkish invasion, despite strong opposition by Britain and the whole United Nations. The Turkish government recognized them immediately and sent (mostly under-educated and unqualified) people there as laborers and deliberately modified the ethnic structure in their favor. These policies caused strong anti-Turkish sentiment in Cyprus (even in the North, despite people there being Turkish).[citation needed] The irony is that Northern Cyprus is a de facto Turkish puppet state and is only recognized by Turkey.

Nowadays, Northern Cyprus has become the Turkish version of Las Vegas, with all that gambling and prostitution. It is also a tax haven and a place for criminals to escape from Turkish laws, all thanks to a lack of legal infrastructure.[citation needed]

Additionally, a UN-controlled buffer zone separates the two, and the United Kingdom retains two bases on the island. There's a whole town called Varosia or Maraş in the buffer zone, which used to be a very popular tourist destination but is now desolate and off-limits (unless you are a Turkish soldier).