"Greece-baiting" was a term coined in early 2012 in a bit of an incoherent screed in anarchist newspaper Freedom Press,[2] but naturally on the internet, has been reappropriated to address a common[3] trend of right-wing argumentation during the European sovereign debt crisis: claim that all welfare states (even the bare minimum) are on a slippery slope to Greece, often until one is blue in the face. It is another in a line of association fallacies and closely related to general anti-Europeanism.

Greek-baiting was rampant in the wait-up to the 2012 U.S. Presidential Election, as the events across the Atlantic had a considerable effect on the economic recovery in North America.[4] If you've observed Republican politicians declare Barack Obama's policies an attempt to create a "European socialist state" and a "European entitlement society,"[5][6] or hear country/province/city X be called "the Next Greece,"[7][8][9][10][11][12][13][14][15][16][17][18][19] you've likely been hit with one. It was also abused by Tea Partiers as an excuse for shutting down the US government in 2013 to prevent raising the debt ceiling.[20][21] Though it doesn't have to be for any implicit political gain.[22]

While it is indeed obvious that Greece was responsible for years of unsustainable (debatably Keynesian, but no one knows what it even stands for at this point) government spending that contributed to the shitstorm it's in, the EU's single currency does not necessarily mean homogenous business models; the eurozone is more diverse than you might think.[23]

The euro crisis has frequently been described as a battle between the work ethics of Southern Europe and its northern neighbours,[24] pointing to the latter's higher GDP growth, productivity levels, and retirement ages,[25] among other factors. It seems to be the smoking gun on blatant benefit scrounging, yet statistics paint a more complex picture — Greeks are working the most hours in the entire continent.[26]

There's also a serious prevalence of tax evasion in the country; its tax burden is almost dead-last in the European Union (31% of GDP in 2010,[27] only a few points away from Canuckistan and some other random landmass[28]). Doesn't exactly scream "high tax, low growth." Even Greece's social expedentures are historically mediocre, barely over the OECD average and handily beaten by Angela Merkel.[29]

Considerable debate continues over how much investment firms actually influenced the whole crisis to its climax. It is a well-known fact that Goldman Sachs and other banks were paid off by Greek governments in the beginning of the millennium to hide their moneycopter spree as they were accepted into the monetary union, using the same derivative scamming that screwed over the States.[30][31]

This was a clear middle finger to the Maastricht Treaty (requiring all members to maintain no more than a 3% yearly deficit and 60% gross government debt[32]) and if such an act of stupidity was found in time, the Hellenic Republic would have been forced to stick with the drachma...and the Great Recession could have already been a thing of the past. Oh well.

The Spanish and Irish economies are unique in the GIPSI GIIPS PIIGS in that their entry into this mess wasn't particularly caused by profligate borrowing,[33] but in a similar matter to the US, via the bursting of a housing bubble.[34][35]

The standard-bearer of the euro is Germany, a social market in its own right, with its labour force working double-time so the beer you're drinking right now isn't double the price.[36] Unemployment levels are the best since Cold War reunification, trade surpluses are up, and there's no sign of it stopping.[37]

However, Germany (along with France) has faced claims of hypocrisy for being the first to violate the Maastricht criteria after the €'s full adoption in 1999.[38][39]

Idiotic Hilarious North American commentators have claimed that Germany will from now on take the lead in European politics or a new golden age for Germany has come[40] (showcasing their complete incompetence concerning European treaties, Germany or economics), a notion that has been dismissed by many German politicians.[41] More inane Christian fundametalists believe that the only reason why Germany is on top of the crisis is because of the "Protestant work ethic" — forgetting that Germany is currently split between Catholicism, Protestantism, atheism and Islam. 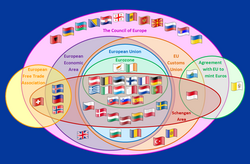 No discussion on the eurozone should leave out what the hell is going on in Scandinavia. Contrary to the insistence of laissez-faire economists on the Nordic Model's collapse, it has survived the turmoil relatively unscathed.[42][43] Although the region has accepted free trade and various deregulations since the 1990s, tax rates, unionization rates and public sectors are still the largest in the Western world, as well as consistent balanced budgets.[44][45]

The Swedes, Finns, Danes et al. can too give us an insight on the very inefficiencies of the EU. While the Scandinavian peninsula shares a common interest for a mixed economy, relationships with the euro area vary vastly; Norway takes a eurosceptic position and sticks with pre-existing trade agreements, Sweden and Denmark are Union members but have opted out of anything else (however, the Danish currency is voluntarily, unilaterally paired with the euro), and Finland has done the most, replacing its markka with the legal tender.[46]

And of course, there's Iceland which actually strengthened its welfare state while recovering from its own debt problem. Naturally, it is conveniently forgotten.

At the heart of the crisis: the issue of monetary sovereignty[edit]

A glaring difference between Greece and a number of countries it has been compared to is that the Greeks are not monetarily sovereign, that is, have full control of a fiat currency. As with its eurozone counterparts, it cannot devalue the € to pay off its debt, ceding that ability to the European Central Bank. The ECB, at the same time, has been unable to reciprocate with adequate monetary policy.[47] Most (i.e. Britain[48] and the US[49]) have their debt denominated in their own pounds dollars, meaning they can "purchase" their debt for as long as it wants to until the currency is inflated into oblivion.[50] It's one of the reasons why Japan's Lost Decade didn't cause the country to default, despite printing out more cash than Greece.

Which brings us full circle: what happens next? Presuming austerity measures aren't a panacea, there's really only two ways to go:[51]

Since the second didn't happen, the logical conclusion is a big one — a commitment to fiscal federalism in the EU.[52] This will likely lead to numerous unintended consequences in the sociopolitical realm, mostly national sovereignty stuff.[53]

As the worst offenders of the crisis proceed to receive their bailout funding, there's a good chance versions of the neologism could emerge for each nation Never mind.[54][55][56][57]

In an age of Great Depression-style stimulus and worrying outlooks on fiscal health, legitimate allusions to Greece's situation can probably be made, in the proper context. Just don't make it the next Godwin's Law, for fuck's sake.