From RationalWiki
(Redirected from Portuguese)
Jump to: navigation, search 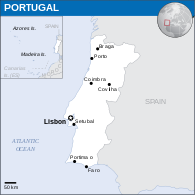 Portugal (officially: Portuguese Republic) is a European country, sharing the Iberian Peninsula with the much larger Spain, its only neighbor.[note 1] The Portuguese speak a language derived from Latin, just as the Spanish do, but they are not Spanish by any means. It has been said that Portuguese is more like "Spanish if spoken by the French", as far as the accents found in the south are concerned; the northern varieties have been described as having Russian undertones. There is only one minority language in the country, Mirandese; it is spoken only in a relatively small area centered around Miranda do Douro, and native speakers number between 10,000 and 15,000. Unlike Portuguese, which belongs to the Galician-Portuguese language group (which is unsurprisingly comprised of the Galician and Portuguese languages), Mirandese is closer to the ancient language of the extinct Kingdom of León (presently part of Spain). Mirandese and Portuguese are mutually intelligible to a wide degree, along with Spanish.

Portugal is a Roman Catholic country, with 84% of the population nominally members of the church -- but only 20% can be persuaded or frightened into attending mass regularly. The Roman Catholic Church teaches that refusing to attend mass without good reason is a mortal sin and can lead to Hell. Apparently, the Portuguese do not follow this teaching.[note 2]

Portugal was a dictatorship from 1926 to 1974, where it was ruled by the Estado Novo, a staunchly pro-Catholic corporatist state founded by António de Oliveira Salazar. It managed to survive unscathed in World War II thanks to its cordial relations with the Allied powers, until 1974 when a group of left-wing army officers, the Armed Forces Movement (MFA), overthrew the dictatorship and heralded the Carnation Revolution. However, the revolution soon descended into a quarrel between socialists, communists, and liberals, culminating into an attempted coup by the far-left faction of the MFA in 1975. It was not until 1976 that Portugal held its first free elections, which was won by social democratic forces. Portugal has been a democracy ever since, and joined the European Union in 1986.

Portugal was also the original colonial empire, and the first imperial power to become truly global (yes, even before the British). As the longest-lived of all European colonial empires (it spanned six centuries), Portugal established colonies in a grand total of 53 sovereign states, including Macau, Brazil, Mozambique, Angola, Cape Verde, St. Thomas and Prince Islands, Equatorial Guinea, and Timor-Leste. The Estado Novo fought a long and costly war to prevent the colonies from gaining independence, which all came undone thanks to the 1974 coup. The official end of the empire came in 1999 at the handover of Macau to China, or in 2002 at the granting of full independence to Timor-Leste.[note 3]

António Guterres, former Portuguese Prime-Minister, is, as of January 2017, the current Secretary-General of the United Nations.

Since 1974, Portugal is a democratic republic ruled by the unicameral Assembly of the Republic with the government being headed by an unelected Prime Minister while the elected President holds a cerimonial, diplomatic position. Portugal has a multi-party system, with the national politics being dominated by the left-leaning centrist Socialist Party (PS) and the right-wing Social Democratic Party (PSD), with various other parties sharing a considerable number of seats in the standing parliament.

Portugal has taken the war on drugs to a new level - by decriminalizing all personal use. Although the law was passed by the socialist government in 2001, the conservatives kept the law when they gained power the following year, and transferred the country's drug and addiction institute from the justice ministry to the health ministry.[1]

The effect of the law has been a reduction in teenage use of the drugs, and a reduction in HIV cases caused by sharing needles.[2] The country has also saved money - originally part of the law's intention - as treatment of drug takers costs less than imprisonment.

Portugal is famous for a type of folk music known as fado—a romantic, mournful, sentimental type of song sung mostly by women with very powerful voices, accompanied by strings. For a taste of it, check out the divine Nathalie Pires.

Portuguese chefs seem to spend their days inventing new ways to serve salt cod (bacalhau), because the dish is ubiquitous and you can eat it in a different recipe every day for at least a year. It's delicious, but you really have to like fish.

If you don't—don't despair. There's always blood sausage (morcela) and chicken stew (arroz de cabidela). If you're really lucky, you'll come across feijoada—a beanfeast having something in common with the French cassoulet with added rice.

Famous wines include Port (named after the northern city of Porto, albeit it's not produced there, just stores), vinho da Madeira, vinho verde and alvarinho.

There is a micronation in Portugal's island of Madeira, the Principality of Pontinha

, which is just an islet by the port of Funchal. It has 4 "citizens", including the founder, and since 2017 one "political exile" (only on weekends; more on that later), José Manuel Coelho, an ex-communist nutter and member of the Madeira regional assembly who was declared guilty of defamation and convicted to spend every weekend in prison for one year for saying that a communist lawyer and politician was a "CIA agent".

The founder, Renato Barros, who bought the islet in 2000 and declared it "independent" in 2007, claims that a document signed in 1903 gives him the right to do so. In reality, it's just a document confirming that the government of the time sold the land to its first buyer.

Oh, and its "official currency" is Bitcoins since 2015. Also, no government's official website is funded by publicity... except Pontinha's.

There are two more micronations: