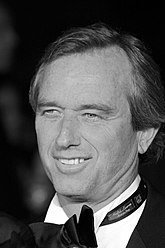 Robert Francis Kennedy Jr. (1954–) is the son of the late Robert F. Kennedy, and the nephew of the late President John F. Kennedy. He is a lawyer and staunch environmentalist. Many of his court cases involved claims of product safety violations and pollution by corporations.

He has co-hosted liberal talk radio show Ring of Fire, syndicated by Westwood One.

Since 2005, he has succumbed to vaccine hysteria and makes the sad mistake of peddling false hope regarding the vaccine/autism conspiracy theory, a stance which earned him the chair of Donald Trump's "vaccination safety" committee.[1] This is the point where his family members distanced themselves from him.[2] In addition, Kennedy endorsed the conspiracy theory that the Republicans rigged the 2004 election.[3] By 2020, Kennedy Jr.'s embrace of conspiracy theories extended into believing the COVID-19 hysteric story that Bill Gates was going to put microchips in vaccines.[4] Kennedy is also against water fluoridation.[5] He is one of the "Disinformation Dozen", which are the twelve people behind 65% of all vaccine misinformation shared on social media.[6]

Kennedy's anti-vaccination group Children’s Health Defense (in alliance with a group called the World Mercury Project) was one of the top two groups that spread misinformation about vaccines on Facebook via anti-vaccination advertisements in 2019.[7] Facebook (sort of) finally started to crack down on groups that spread bullshit like this in 2020. CHD responded by suing Facebook for "censorship".[8] (Despite his prior experience as a lawyer, Kennedy somehow failed to recognize what long-established case law currently says. Generally speaking, what's protected by the First Amendment in this case is Facebook's right to utilize editorial judgment to prevent the publication of bullshit on their platform.

One of Kennedy's favorite rhetorical devices is to evoke Godwin's Law by comparing vaccines and other COVID-19 public health safety measures to Nazis and the Holocaust. On 25 January 2022, for instance, Kennedy was widely denounced for comparing vaccine mandate opponents to Jews who hid from Nazis during the Holocaust, even implying that for some reason Anne Frank

was orchestrating. This was hardly the first time that Kennedy had used Nazi analogies in his remarks on the subject. [9][10]

In mid-November 2021, he wrote a book of conspiratorial bullshit linking Gates, Anthony Fauci

Later, in an interview done by SPIN

in January 2022, Kennedy promoted the sort of conspiracy bullshit that fueled this book: [14]

When confronted by the interviewer with the fact that new COVID-19 cases at the time were overwhelmingly the un-vaccinated, he handwaved away this argument by claiming that this was the result of "crazy statistical gimmicks", citing a bit of his "statistical dancing" of his own imagination to "prove" this. [14]

Fauci responded by calling Kennedy a "very disturbed individual" who was "just full of inaccuracies and distortions". [25]