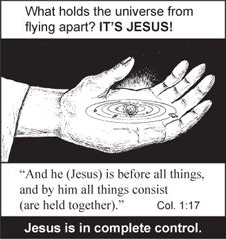 Jesus could crush the universe in fist if he felt like it, Mr. Chick!

Intelligent falling (or IF) is a parody of intelligent design (ID) that holds that gravity is actually the hand(s) of God pushing objects down toward each other.

Intelligent falling was created on Usenet in 2002 as a parody of intelligent design.[1]

In its original version, intelligent falling also stated that the rate of change in the horizontal component with time is equal to 1 Corinthians 1:10.

Although it was originally intended to be satire, some fundamentalist Christians, such as Jack Chick,[2] have actually taken up the idea.