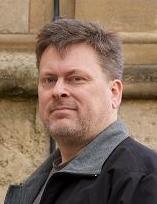 Edward Feser (1968–) is a Catholic / Christian apologist writer of books such as Aristotle’s Revenge: The Metaphysical Foundations of Physical and Biological Sciences, The Last Superstition: A Refutation of the New Atheism, Aquinas, Scholastic Metaphysics: A Contemporary Introduction, Five Proofs of the Existence of God, and the co-author of By Man Shall His Blood Be Shed: A Catholic Defense of Capital Punishment.[1]

A critic of New Atheists, Feser accuses his opponents of misreading philosophers like Thomas Aquinas, Aristotle, and Leibniz and promotes a reversion to Aristotelian-Thomistic metaphysics.[2][3][4]

His book The Last Superstition claims to be a refutation of the New Atheism, which he accuses of "intellectual dishonesty, philosophical shallowness, and historical, theological, and scientific ignorance"; he tries to prove the existence of God starting with Aristotle's teleological metaphysics, in contrast to mechanical Newtonian metaphysics which he rejects.[5]

In contrast to some modern theologians, he also claims that dogs don't go to Heaven.[6] His opinion about unicorns is unrecorded.

This christianity-related article is a stub.
You can help RationalWiki by expanding it.
Retrieved from "https://rationalwiki.org/w/index.php?title=Edward_Feser&oldid=2437544"
Categories:
Hidden category: