From RationalWiki
(Redirected from Armenian)
Jump to: navigation, search 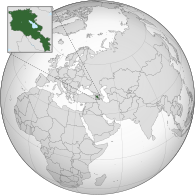 Armenia (Armenian: Հայաստան - Hayastan) is a not-quite-Asian, not-quite-European country in the Caucasus region. It is bordered by Azerbaijan, Turkey, Georgia, Iran, and the internationally unrecognized Artsakh (formerly the Nagorno-Karabakh Republic) which is technically part of Azerbaijan but is de facto part of Armenia.

The Kingdom of Armenia was the first nation to recognize Christianity as the official state religion in 301, predating the Roman Empire's legalization of Christianity by 12 years.[1] Consequently, the Armenian Apostolic Church (independent of Eastern Orthodoxy) is the world's oldest state church. Over 90% of Armenians belong to the Church.[2]

The Armenian genocide took place between 1915 and 1918; the Ottoman Empire committed systematic killings, deportations, and forced displacement of the (predominantly Christian) Armenian population, resulting in the deaths of 1 to 1.5 million people.[3] The factuality of the Armenian genocide is denied by the government of Turkey, who argue it was a religious and ethnic war, and that up to a million Islamic Turks and Kurds died during the period at the hands of Armenian militiamen, as part of the broader phenomenon of Christian-Muslim violence throughout the Ottoman Empire at the time. However, some Turks have commemorated the genocide and apologized on behalf of the government.[4]

Armenia was part of the Soviet Union from 1922 through 1991. During the Russian Civil War it was part of the Transcaucasian SSR, but broke off soon afterwards, forming an independent country that continued to fight World War I—it was even a signatory to the Treaty of Sèvres. However it was occupied by the Red Army. The Armenian SSR was formed in 1936.[5]

Toward the end of the period of the Genocide, the Russian Revolution occurred, and a number of ethnic minority areas, including Armenia, formed short-lived republics. Like many of them, Armenia

Ready for another go, Armenia declared independence from the Soviets in 1990, and was internationally recognized after the dissolution of the USSR in 1991. Armenia has disputed the Nagorno-Karabakh region with Azerbaijan since then, up to the present day.

Armenia has been firmly in the clutches of the right-wing nationalist Republican Party for the past decade or so, but recently, the opposition held massive protests (led by Nikol Pashiniyan, MP for the liberal Way Out Alliance) against the power grabs taken by Republican prime minister Serzh Sargasyan. He resigned from the post on April 23, 2018.[6] The post was taken over by Pashinyan,[7] and this success could signify a possible increase in political freedom in Armenia (and perhaps its corrupt, authoritarian neighbors will follow).

Despite being from a family that is said to have produced an Armenian Apostolic priest in every generation since 301,[8] an Armenian fellow by the name of Rushdoony converted to Calvinism and was educated at the University of Edinburgh. Fleeing the Armenian genocide, he came to the United States in 1916 in the company of his wife and young son. Said young son grew up to be the prominent Dominionist kook, R.J. Rushdoony.