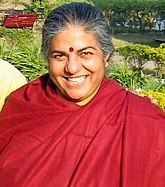 Vandana Shiva is an environmentalist from India. She is known for her opposition to good food genetically modified food, particularly golden rice (a variant of rice modified to contain beta-carotene, the precursor to vitamin A).[2] She is also a prominent member of the ecofeminist movement.[3]

She earned her doctorate in Philosophy from the University of Western Ontario in 1978 by a dissertation titled Hidden Variables and Locality in Quantum Theory.[4] However, she claims to be a quantum physicist.[5] Various environmentalism and left-wing websites also introduce her as a physicist.[6][7] To be fair, she did actually receive both a bachelor's and master's in Physics from Panjab University in Chandigarh in 1972 and 1974, and then briefly worked at the Bhabha Atomic Research Center.[8]

She has several written books on GM foods. In them, she has said how GM foods could cause sterility in all plants and how it could destroy the world:[9]

The gradual spread of sterility in seeding plants would result in a global catastrophe that could eventually wipe out higher life forms, including humans, from the planet.

This is of course, not even wrong. By the very definition, sterile plants don't reproduce, and thus wouldn't be able to spread throughout wild populations. GMOs do not produce anything that couldn't possibly be produced by natural means; it just does it faster. Injecting jellyfish DNA into corn might seem like something that's impossible, but such events do happen in the wild; in what is known as horizontal gene transfer, viruses can take DNA from one organism and inject it into an unrelated organism, allowing for genes to appear in an organism almost out of the blue.

During the aftermath of the devastating 1999 Orissa cyclone,

Shiva wrote a letter to Oxfam,

in which she pointed out Ofxam's position on GM and WTO policies, expressed disappointment and expressed hope that their food aid will be GM-free.[10] Shiva's group gathered grain donated for relief, apparently had it tested and then claimed that it was genetically modified. They then demanded that this "corn-soya blend" food be withdrawn immediately.[11] She also claimed that biotechnology companies were trying to use the people of Orissa as guinea pigs for products that had been rejected in Europe and Japan.[12][1]

In a Huffington Post interview published on 28 October 2010, she claimed to have in her possession letters from Chinese scientists proving that SARS

was caused by a virus from a genetically modified plant crossing into animals.[13] And 10 years later, this hasn't changed for the better. She now claims that the COVID-19 Coronavirus was caused by GMO animal feed. [14] During a panel at the "Real Truth about Health" naturopath summit in the US, joined by fellow crank Jeffrey Smith, she claimed that - according to "a lot of scientists and some people" - this is also true for viruses that caused the "new epidemics" in general; and she also implies that this is all connected to a sinister plot devised by Big GM and Big Pharma for their own financial gains.

The new epidemics of new viruses, a lot of scientists have said, are coming from the hybridisation of viruses that are used as promoters and the viruses in our gut. I got a letter from a Chinese scientist when the SARS epidemic broke, do you remember, and he said “We are feeding all our animals GMO soya and it could so easily be that this horizontal gene transfer is happening and the animals are developing super-viruses which are then jumping from animals to humans." This also, some people have said, is related to the H1N1 which are very lethal viruses compared to earlier viruses. Again, because the GM-chemical industry, the GM industry and the pharmaceutical industry is one industry for them it’s wonderful there’s more diseases. It’s a very good successful business model. But for the people … it’s not. [all said while wearing a gleeful smile ] [15]

But most important of all, farmers should be free to choose what kind of technologies they want to adopt.

that happened in December 2012. She has also "discovered" links between increased use of GMOs and glyphosate, and rise in autism, as there is a one-to-one correspondence between their graphs. Remember correlation does not imply causation.[17]

On nuclear energy and fertilizers[edit]

Shiva hates nuclear energy and fertilizers, as both were originally "designed for war". She often compares fertilizers with nuclear energy. She has argued that anything with "origins in war always has the potential for war". She has pointed out that fertilizers are being used by terrorists to make explosives.[18] She called for a ban on fertilizers which is a "weapon of mass destruction" according to her.[17] This is an absurd argument since many everyday objects are the result of wartime inventions, e.g., vegetarians sausages, modern feminine hygiene products, stainless steel,[19] air traffic control, nylon and other synthetic fabrics, most of the field of aviation, satellites and the rest of the space program, computers, the internet, and portable X-rays.[20]

Her position with regards to nuclear energy is particularly surprising, given that she once worked at Bhabha Atomic Research Centre

[21] But the suicide rate among farmers actually had started rising more than 5 years before its introduction.[22] In fact, a long-term study released in 2012 on the economic impacts of Bt-cotton in India showed that Bt-cotton has increased yields, profits, and the living standards of smallholder farmers.[23] Another 2014 study found that high suicide rates were also observed in states which don't even cultivate cotton. The study found that suicides were caused by indebtedness due to lack of access to formal banking, and lack of irrigation facilities which could have prevented crop failures.[24]

introduced in 1991. She has pointed out that were 10,068 reported rape cases in 1990 and the number jumped to 24,206 cases in 2011. She has blamed it on the economic reforms carried out by India in the early 1990s. She argued that the traditional patriarchy and "capitalist patriarchy" has combined to form a hybrid. She has called the growth-focused policy "myopic" and GDP a "patriarchal construct". She has argued that it disregards the contribution of women towards their family and community, and makes them economically vulnerable. She has argued that limitless economic growth is not possible without the powerful grabbing the resources of the vulnerable, which subjects the women and the planet to a culture of rape.[25]