John Fagan is a notable anti-GM activist with a degree in molecular biology. He has contributed to the creation of a great deal of anti-GM propaganda, and sat on the board of Genetic ID, a company that stands to benefit directly from the controversy he generates over genetically modified food. He has connections to the Maharishi cult and the Natural Law Party. He is connected to an impressive amount of Maharishi-related and other businesses, many of which stand to directly gain from controversy over genetically modified foods.[1] He has been accused of working with opponents of biotech (such as Jeffrey Smith, who is another Genetic ID member) in order to boost Genetic ID's profits.[2] Genetic ID and its various members have a very large amount of connections to anti-GM groups and organic food companies.[3] He is now a senior scientist at the Health Research Institute, a laboratory established specifically to test for glyphosate residues.[4] 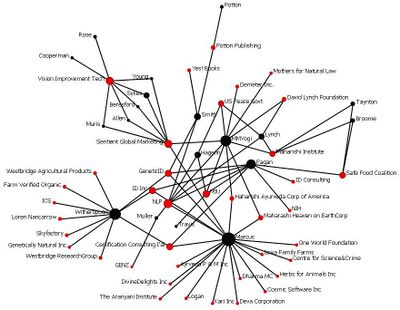 A map of connections between Fagan, Genetic ID, Smith, and various other groups

This food woo-related article is a stub.
You can help RationalWiki by expanding it.
Retrieved from "https://rationalwiki.org/w/index.php?title=John_Fagan&oldid=2485359"
Categories:
Hidden categories: