Fish farming or pisciculture is the process of deliberately rearing fish for consumption, as opposed to the traditional way of catching fish by going into rivers or oceans and grabbing what swims by. Fish farming can be done either in purpose-built tanks or in pens or nets constructed in existing bodies of water, and it is used for fish including salmon, trout, catfish, sea bass, carp, and others. 50% of fish consumed globally is now farmed.[1]

While fish farming can be done by individuals, and often is in Asia, in Europe and North America it is typically large-scale and industrialised. It therefore has many of the same problems as other large-scale commercial farming, with the use of antibiotics and other chemicals in farmed salmon, plus risks of pollution from fish waste, and concerns that the farmed product is less nutritious or tasty.[citation needed] Genetically modified salmon was tentatively approved in the US in 2015, and attracts the same fears as other genetically modified food. 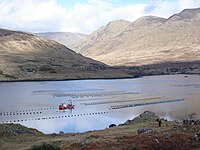 " may mean one of several species of Salmonidae, which are found in both the Atlantic and Pacific, though Atlantic salmon numbers are severely depleted.[2] In the wild, salmon are born in rivers but spend most of their lives in the sea before swimming back up-river to spawn (normally returning to the same river).[3] Salmon farming typically takes place in large cages or nets open to the sea.[4] Normally, farmed fish will spend their whole lives in the cages, though there have been non-commercial schemes to breed salmon and release them into the wild, known as "ranching".[5] Salmon are carnivorous and eat other fish.[6]

Salmon are prey to a number of parasites, including sea lice and internal parasites found in cysts in the salmon's flesh. These pose little danger to humans when cooked,[7] but can spread rapidly between salmon in close contact, affecting nearby wild salmon when fish are farmed in open water.[8]

Research by conservation groups (who may not be 100% disinterested) has found that salmon sellers, particularly restaurants, often lie about whether the fish they sell is wild or farmed.[9]

Is farmed salmon better or worse for you than wild salmon?

Like other animals near the top of the food chain, salmon can accumulate toxic metals and other chemicals, either consumed by prey species or from the water. Some tests have found significantly higher levels of dioxins, chlorinated pesticides, and PCBs in farmed salmon[10][11], and if the water they are grown in is polluted, the salmon will be too. However, eating fatty fish including salmon will reduce your risk of other cancers.[12]

Time reported that its panel of experts say all salmon is good for you, but most experts say wild is better: farmed is more likely to contain antibiotics and pollutants and has more saturated fat and less long chain omega-3

(the extra-good type of omega-3 oil).[13] Fish oil is commonly added to the food of farmed salmon to raise levels of omega-3.

Because salmon are farmed in the sea in open cages, it is possible for farmed salmon to interact with wild salmon, either by escaping or simply close proximity. This allows the spread of sea lice in particular, which can result in the death of juvenile salmon, but also other disease vectors. In 1972, an infection of the Gyrodactylus parasite was spread from the Baltic to Norwegian salmon by farming, which spread to wild salmon killing large numbers.[14] There have been claims that sea lice from farmed Pacific salmon have been severely reducing numbers of wild salmon, though this is disputed by others.[15]

Antibiotics are commonly fed to salmon, which runs the risk of antibiotic resistant bacteria developing, as with other use of antibiotics in farming.[16] Some research has been done in Norway into vaccinating salmon against some diseases, though this is not common practice worldwide.[17] There is the risk of chemicals which are used on farmed salmon getting into the wild, and of the fish's waste products contaminating the ocean. These dangers can be largely mitigated by using closed tanks, but this is more expensive.[18] Birds such as sea eagles which prey on salmon can become tangled in the nets used for salmon farming[19], while seals and other predators can be attracted and are often killed by fish farmers[20]. Good management and careful cage design can mitigate this.

Being carnivorous, farmed salmon are fed smaller fish which must be caught, although there have been attempts to feed them soya beans, yeasts, or other cheap non-animal protein. This means salmon farming is not a particularly efficient way of producing protein, compared to directly eating smaller fish such as sardines, pilchards, or herring. However many of the smaller bait fish/forage fish are not particularly palatable to western consumers, even though your cat will happily eat them.

Genetically modified salmon (or "frankenfish" to their enemies[21]) have been developed to increase growth rates and for additional resistance to disease and cold to allow salmon farmers to grow more fish and make more money.[22] AquAdvantage salmon from AquaBounty Technologies include genes to increase growth rates and grow year-round, allowing them to be ready to eat in 18 months rather than 3 years.[23]

Anti-GM activists oppose all GM food because Frankenstein. The FDA reviewed AquAdvantage and passed it as just as safe and nutritious to eat as regular farmed salmon, but with restrictions on cultivation.[citation needed] Although conventional salmon are farmed in open nets, AquAdvantage have been forced to use inland tanks in Panama, while the eggs are produced in PEI, Canada.[24] The use of tanks should prevent the escape of pollutants (such as fish shit) and also significantly reduces the risk of escape, although salmon are cunning critters known for their jumping ability.

Patty Lavella of Food & Water Watch commented "The question will be if their proteins and fats — altered to grow at a unnaturally rapid pace and to be larger will have negative impact on human hormones, resulting in inflammation and cellular growth such as tumors or fat cells".[25] This ignores the fact that farmed salmon has already been modified by selective breeding to mature twice as fast as wild salmon, have greater disease resistance, and be a nicer color.[26]

There is a lot of scaremongering about how GM salmon contains growth hormones, but all salmon contains growth hormones; otherwise the fish would be really small. GM salmon may contain slightly more, but not enough to significantly affect overall levels people consume.[23] Because some people are allergic to fish already, there is some concern that they might be more allergic to GM salmon although it's not clear why this should be the case, since GM salmon is chemically very similar to regular salmon, and there is no evidence that AquAdvantage salmon causes any more allergies.

Trout are similar to salmon but smaller and less sexy. See above.

Catfish are raised in lakes and channels particularly in the southern US. They are typically given a feed mix that includes grains and soy.

Catfish is commonly considered a cheap source of protein, and its production has few environmental risks as long as the catfish nurseries are kept separate from other bodies of water. As with any industrial farming, care must be taken to avoid pollution.[citation needed]

Some environmentalists feel it's better for fish to swim free than be packed into tanks. This mirrors debates about whether farmed cows are better off than wild wildebeest.[citation needed]

Fish such as the grass carp, silver carp, and common carp, are widely farmed in China. Carp typically live in slow-moving water and eat plants. Environmentalists are largely unconcerned by this. In Central Europe, carp has been genetically modified by centuries of selective breeding to have a round form that fits on normal plates (wild carps look similar to most other fish) and carp ponds have changed the landscape of many places, going as far as being part of the coat of arms of many hamlets. While the high amounts of food (and excretions by the carps) make the ponds eutrophicate, this is partially deliberate and not all that harmful, given that the ponds are very shallow (usually half a meter deep) and emptied every off-season to allow the ecosystem to recuperate. In fact the "green" credentials of aquaculture carp are so good that even Greenpeace Germany calls carp the only fish that you can eat without damage to the environment.[citation needed] Another aspect is that most carp is produced close to where it is consumed, thus reducing CO2 emissions in comparison to other fish that has to be transported over thousands of kilometers.

Mussels are a bit easier to farm due to their largely sessile livestile which makes "harvesting" easy and reduces the need for any type of enclosure. Furthermore they filter the seawater for edibles, meaning there is little need for additional feeding and the problems this usually brings. However, given their position in the food chain, they tend to accumulate pollutants as well as nuclear particles if downstream from a major emitter. Another problem that mussels bring is the introduction of invasive species, which is a particularly big problem in the North Sea after Pacific oysters were introduced for cultivation due to their superior size and quality compared to the native variety that is now close to the brink of extinction.[citation needed]