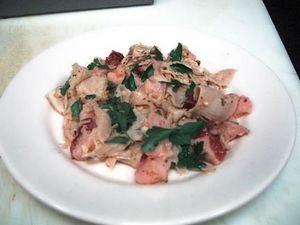 Tripe is the stomach lining of any of a number of ruminant animals — including cattle, sheep and goats — which has been carefully prepared and cooked into a delicious repast.[1] Tripe is popular in many cultures, and is possibly most famous in the Scottish dish, haggis.[2]

In Lancashire, England, tripe is a delicacy eaten raw with vinegar.

, a beef noodle soup, is commonly eaten with tripe. Chinese and Korean cuisine also use tripe, such as a dim sum dish eaten steamed or boiled as an ingredient for hot pot.

Tripe, as with other organ meats, tends to be high in iron, and some varieties, such as green tripe, are also high in chlorophyll. Tripe is often used in pet foods.[3] Many recipes exist for tripe,[4] and supporters of the delicacy speak highly of it, both in terms of flavor, texture, and health benefits.[5]

In Britain and the US, the word 'tripe' is also used as a slang term meaning 'inherently unbelievable' or 'nonsense' as in "Creationism — what a load of tripe".