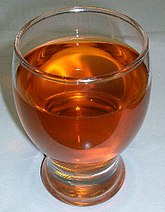 Rooibos Tea (Aspalathus linearis) is an earthy, nutty-flavored herbal tea that has been subjected to a health craze.[1][2]

It only grows naturally in a part of South Africa, a country known for its unique plant life that is different from pretty much the rest of the world.

Like with most "super foods", rooibos health claims start out on a level that's perfectly reasonable:

In areas with sketchy water infrastructure, drinking tea brings the added benefit of forcing you to boil the water, which kills many water-borne pathogens.

Unfortunately, boiling water before drinking it can't protect you against lead and other nonvolatile contaminants still found in the water of some developing countries (and notably, Michigan).

Unsurprisingly, the health claims quickly start diverging into the bizarre:

Drinking Rooibos tea likely won't hurt (if consumed in moderation, assuming no prior health problems), and it might even be good for you.[9] Just keep in mind that supposing so requires a leap of faith.

One sore part of you guaranteed to take a hit from this tea is located in the wallet region — there's no such thing as a free lunch tea.

And whatever you do, don't expect Rooibos (or any tea, for that matter) to perform any miracles.