From RationalWiki
(Redirected from Soybean)
Jump to: navigation, search

Ah, the humble soybean (Glycine max). The primary source of proteins and fats for over a billion of the world's population. In addition to being directly eaten (including its bean sprouts), it's used to make tofu, vegetable oil, miso, soy sauce, soy milk, MSG, livestock feed, a wide variety of minor food ingredients, biodiesel fuel, adhesives, candles, crayons, and ink.

And if you believe everything you hear about it, it also prevents cancer, causes cancer, destroys your thyroid, and makes you stark raving gay.

An allergic reaction to chemicals in soybeans is among the top 8 food allergies in North America.[1] Most of those who are allergic to soy are allergic to one or more of the proteins in the bean, but there have been a few cases of people who are instead allergic to components of soybean oil. 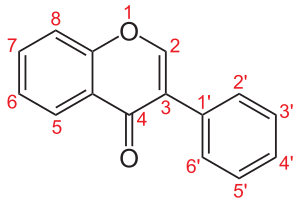 Soybeans contain rather high concentrations of chemicals called isoflavones. The isoflavones prevalent in soybeans are:

These isofavones are present only in the soy protein. They are absent from the soybean oil.[2] If you're eating vegetable oil, or soy lecithin (which is made from soy oil), you're not getting isoflavones.

You're also not getting isoflavones if you eat soy sauce. Although soy sauce is made with soy protein, it's fermented, and the fermentation process denatures the proteins.

Some isoflavones have been found to be toxic to normal cells in vitro in high doses. They can deteriorate DNA in blood stem cells, which may lead to leukemia. They've been implicated in increasing the risk of leukemia in infants. Both genistein and daidzein have been shown to accelerate the growth of breast tumors. Soy isoflavones may even activate gene expression that contributes to breast cancer.[4]

Isoflavones, among other flavonoids, have been found to act as topoisomerase inhibitors, similarly to some chemotherapy drugs. They act as angiogenesis inhibitors, which can prevent metastatic tumors from growing bigger than a pinhead. They act as tyrosine kinase inhibitors, shutting down one of the major molecules involved in cell proliferation signal cascades. They even act as antioxidants.

Certain isoflavones have been shown to interfere with thyroid peroxidase in laboratory rats.[5] This means soy protein may be lightly goitrogenic, that is, capable of causing hypothyroidism and/or goiter. Cue the fearmongering.[6]

Since Hashimoto's thyroiditis — the most common cause of hypothyroidism in the developed world — involves autoimmune attacks on thyroid peroxidase, one line of thinking is that therefore consuming goitrogenic foods, like soybeans or raw cauliflower, would just make the condition worse. A 2006 review by the American Thyroid Association concluded: "some evidence suggests that soy foods, by inhibiting absorption, may increase the dose of thyroid hormone required by hypothyroid patients. However, hypothyroid adults need not avoid soy foods."[7] Other evidence suggests that adequate iodine intake ameliorates the goitrogenic characteristics of genistein and other isoflavones, and that thyroid function in lab rats was normal even when thyroid peroxidase was partially interfered with by isoflavones.[8]

Soy is making you girly / gay![edit]

See the main article on this topic: Soy boy

Some high-IQ folk have decided that, because soy contains somewhat similar compounds to estrogen, soy is making you gay (or girly, even worse). The science doesn't bear this out.

As of 2010, 93% of all soybeans grown in the United States were genetically modified food.[9] Globally, about 78% of the total acreage used for soybean production is growing GMO soybeans.[10] Specifically, these soybeans have a herbicide tolerance trait (e.g. Roundup Ready) grafted into their genome. This allows farmers to kill the weeds in their soybean fields by spraying the entire field with a broad spectrum herbicide like glyphosate, without worrying about killing their crop in the process. It does reduce yields slightly, but as it uses much less energy than other methods of weed control and ironically, less chemicals, it's still a win for the environment.

Needless to say, some folks have gotten themselves twisted into a knot over this. This article, for example, claims that genetically-modified soy "contains high concentrations of plant toxicants," which they claim represents literally thousands of plant biochemicals, "many of which have been shown to have toxic effects on animals." No specifics. Similarly, Irina Ermakova did a poorly-controlled trial on rats and now claims that genetically-modified soy causes all sorts of reproductive problems.