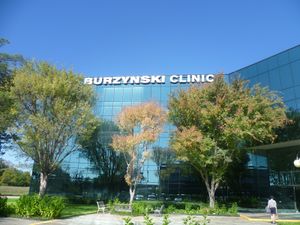 The Burzynski clinic is a filthy (and profitable) death chamber masquerading as a research institution and hospital where patients around the world are subjected to brutal worthless treatments, bankruptcy, and eventually death in Texas. It is run by its founder, the Polish-born Stanisław Burzyński, who became a millionaire from the cash of his victims and the generous GoFundMe folks. He says he's a doctor but his alma mater is rather equivocal on the matter and there is skepticism over his qualifications.[1][2][3][4][5]

It's notable for the invention from whole cloth of "antineoplaston therapy" (ANPs), a name coined by Burzyński for a mix of various peptides extracted from urine. Yes, he is in a very literal sense taking the piss. PZ Myers has taken this up.[6]

Stories of disappointed cancer patients who lost large sums of money to Burzyński trying to survive and their relatives are heartbreaking.[7] Meanwhile, Burzyński lives in an extravagant mansion which is likely paid for with the unholy amount of money his clinic charges for a treatment that has been never shown to work.[8] The nearby Texas Children’s Hospital takes in so many of Burzynski's victims that they recognize when they have been to the clinic, and the staff heavily dislike the clinic, complaining that they are "always cleaning up Burzynski’s messes".[9] Dr. Jeanine Graf in fact has said they have never seen a Burzyński patient survive.

He currently operates under severe restrictions from the Texas Medical Board.[10][11] The government now monitors the clinic's billing practices and reviews its patient records. Burzyński must attend a Physicians Ethics program and complete units in topics of medical research (like he doesn't know how to dodge the law). He must also submit forms that indicate informed consent from his patients (prior to the treatment) to the Board so the Board can verify that it adheres to regulations and the law. Burzyński must disclose to his patients that he owns the pharmacy and also submit a form indicating ownership disclore regularly to the board. Finally, he must complete a Medical Jurisprudence Exam. Unfortunately, his punishment is just a slap on the wrist compared to the abuse he's committed and profited from. He also could have received a harsher penalty by being fined $360,000 and $20,000 in restitution to a patient while being put on probation for his medical license. Instead, he has a five-year probation with a public reprimand and fees and retribution of just $60,000.[12] Either way, the money is not proportional to his damage, as he can quickly recoup those fines through his profits.

The Burzynski treatments are not accepted by actual medical science and not approved by the FDA. Instead he has been running a series of trials, sometimes legally and sometimes not, over a period of at least twenty years; in this time there has been no publication in the peer-reviewed literature. This, along with the immense sums charged to patients on the trials (varying from tens to hundreds of thousands of dollars) has led to robust criticism of Burzyński, particularly after an uncritical piece in The Observer promoted a $200,000 fundraising drive for a British girl.[14] There is general criticism that media are over-optimistic in reports about Burzynski and alternative medicine generally preventing patients from making objective informed choices.[15]

According to official records from the FDA, the Burzynksi clinic has consistently failed to obey even basic protocol meant to protect patients.[16] For instance, the clinic falsely recorded one patient as being in remission and others having partial responses. In other cases, some patients that underwent chemotherapy right before were enrolled in Burzynski's experiments, which is explicitly forbidden by protocol. In one case, protocol that requires MRI or CT evidence for a tumor has been ignored. Some patients continued participating in the experiment even when protocol requires them to be withdrawn if patients show life-threatening side effects. Finally, the clinic has failed to properly inform patients of the costs of the treatment prior to enrolling in the treatment.

Teh 3vil Big Pharmaz in the person of the FDA issued the Burzynski clinic with an enforcement notice in October 2012 requiring them to stop promoting ANPs as safe and effective, and to stop using patient testimonials, as ANPs are still "investigational" and may therefore not be promoted for the indications for which they are being investigated. The term "investigated" is used loosely here: Burzyński has over 60 clinical trials registered on clinicaltrials.gov, not one of which has been published. Some people might even be so uncharitable as to think that enrolling people in clinical trials, at a cost to the patient usually in the hundreds of thousands of dollars, and not publishing the results, is unethical.

From the emphasised text (not in the original) the reader will understand: this is a purported treatment that has produced absolutely no credible results in 35 years of assiduous promotion by Burzyński and despite the amount of cash Burzyński is living with, which could have been used for funding better experiments, and nobody else is even interested in testing it any more.

The FDA has accused Burzyński of overdosing patients and falsifying records so results from his treatment appear better than they really are. Burzyński received a formal warning.[23]

In lieu of peer-reviewed publications Burzynski has opted for the obviously superior medium of a "documentary" entitled Burzynski the Movie: Cancer is a Serious Business[note 1] that sets out his stall as a wronged man done down by the evil FDA and the Big Pharma Conspiracy. This approach has inexplicably failed to convince the scientific and medical establishment; it also caused director Eric Merola to become quite defensive towards critics himself.[24] "How defensive?", you may ask. How does using a (possibly bogus) DMCA takedown notice to silence online critics grab you?[25]

Merola's apparently insatiable need to defend Burzynski extends to his whining about unrelated antineoplaston studies being rejected by medical journals such as Lancet Oncology, apparently because the rejection of one study (the Kurume University Hospital study led by Dr. Hidaeki Tsuda, in this case) would reflect poorly on Burzynski's reputation as well.[26] 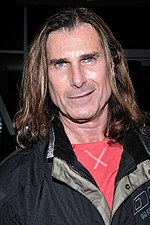 Besides Merola, Joseph Mercola is an admirer, almost to the point of proclaiming Burzynski a Misunderstood alt-medicine genius oppressed by the FDA and mainstream medical practitioners everywhere.[27]

Mercola screened a second Burzynski agitprop film during the April 2013 Newport Beach film festival,[28] and, oddly enough, a special celebrity guest was called upon to help promote it: none other than Fabio (yes, that Fabio) Lanzoni.[29] Although this partnership may seem nothing short of surreal, the probable reason Lanzoni fell for Burzynski and Merola's pitch is that his sister is receiving treatment at the Burzynski clinic. The clinic probably just ensured his sister's death, which was on August 14, 2013.

On the other hand, former patients like Wayne Merritt[30] and quite a few others[31] might have a bit of an issue with Mercola's enthusiastic characterization of Burzynski. Merritt, in particular, has come in for legal harassment by the Burzynski clinic as a result.[32]

Burzynski may not enjoy being the recipient of a Pigasus Award from the James Randi Educational Foundation for his fine work in (pseudo-)science, either.[33]