Therapeutic touch (abbreviated TT) is a type of "healing" not uncommonly taught at nursing schools. Like faith healing, prayer, and other non-traditional healing methods, it relies on hypotheses that have no scientific basis and are easily disproved. It operates on pre-scientific beliefs which include a life force that separates the living from the nonliving, similar to qi or prana. TT purports that certain "sensitive" individuals have the ability to sense other individuals' "Body Energy Field". These people, whose talent can be groomed, can manipulate this energy by making particular hand movements over the client. These movements are intended to channel the healer's own energy to the patient or otherwise attempt to reduce blockage, "imbalance", or other energy disturbances so the client can heal. According to the Nurse Healers Professional Therapeutic Touch Manual "people with psychiatric disorders, the elderly and/or debilitated are more sensitive to the interaction."[1]

Therapeutic touch is another in a long line of "bunk" medical treatments that sound too good to be true. It carries just enough of an air of plausibility to fool many lay-people and has vocal supporters. These supporters attack those who call into question their "science", typical of those that follow pseudoscience. They have been successful at inserting their ideas into mainstream nursing colleges, where TT is tightly embedded. As with many "alternative" medical techniques, practitioners are unregulated and not required to prove the efficacy or safety of their techniques. Based on this alone, the need for improved rigor in scientific nursing education is clear, so that compassionate nurses do not waste their patients' time and money with "patent cures".

Various types of healing-at-a-distance have been used for many, endless millennia. Such theories as "mesmerism" and "animal magnetism" have existed for over a century, and are completely discredited. Therapeutic Touch was popularized in the early 1970s as an outgrowth of aura-theory, ESP, and other New Age ideas. The current ideas of TT were developed by Dolores Krieger, Ph.D., R.N., of N.Y.U.'s Division of Nursing[2] and by Dora Kunz, of the American Theosophical Society.[3] Since it is taught in many mainstream nursing schools, it has undergone a special level of scrutiny rather than being dismissed out of hand. 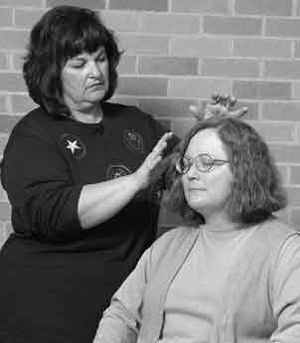 TT is scientifically implausible, especially since these supposed "energy fields" cannot be detected with any instrument and otherwise not very strictly defined. It has been formally studied, however. The most famous study to date was published in the Journal of the American Medical Association.[4] This study failed to show any ability to detect "human energy fields", the proclaimed prerequisite to TT. There was significant backlash among "practitioners",[5][6] none of whom offered up refuting evidence in support of therapeutic touch.[7] It is notable downright fucking impressive that the lead investigator on this study, Emily Rosa,[8] was nine years old at the time. She holds a Guinness World Record for being the youngest individual to be published in a professional medical journal, and was featured on an episode of Penn & Teller's Bullshit!.

Studies have also been published in Lancet[9] and other reputable medical journals.

Despite all this (or maybe because of it, woo advocates being what they are), the Pumpkin Hollow Retreat Center (which also seems to be connected to Theosophy in some way) both funds and promotes TT. Not only did this get them a 2013 Pigasus Award from the James Randi Educational Foundation,[10] but it also got them an additional booby prize in the form of a recent One Million Dollar Challenge for the claims they made concerning its medical efficacy.[11]