From RationalWiki
(Redirected from Ayurvedic)
Jump to navigation Jump to search 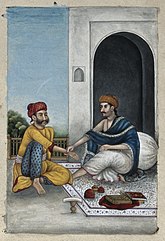 Ayurvedic medicine is a system of alternative medicine that descends from ancient medical techniques of Hindu society in Ancient India. There are three principal early texts on Ayurveda: the Charaka Samhita, the Sushruta Samhita, and the Bhela Samhita. Ayurveda is one of the few systems of medicine developed in ancient times that is still widely practiced in modern times. As such, it is open to the criticism that its conceptual basis is obsolete and that its contemporary practitioners have not taken account of the developments of modern medicine.

Rasa shastra is an ancient body of medical folklore in Ayurvedic medicine. It holds that it will do you good to eat mercury, lead, and arsenic, but only if they've been purified by baking them in burning cow shit. Not recommended; while mercury and arsenic do have some rare real medical uses (e.g. chemotherapy and treating certain parasitic diseases), they do so in the form of being put in various compounds that make them safer, not boiling them in yogurt.

Ayurvedic practitioners opposed a global ban on mercury trading on the grounds that the element is a very important component of Ayurveda; some went as far as to say that Ayurveda "may collapse" if the ban goes through.[16]