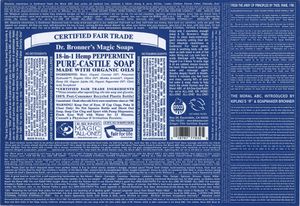 The full label. No, it really is all text. Possibly the ultimate word salad! But please, "Don't drink soap!"

Dr. Bronner's Soap is a liquid[note 1] peppermint[note 2] soap with weird quasi-religious ranting all over the label.

It is unclear exactly what his point is, except it vaguely has something to do with uniting the human race into "all-one" by following something called the "Moral ABC." For many years, nobody knew quite what the Moral ABC was, but as of May 2014 the labels explain it as apparently a syncretic quasi-religious text compiled by Bronner himself (which can be ordered from his company for $2 US). Alongside exhortations to familiar virtues such as hard work and self-discipline are references to a weird birth control method he claims came from Essene scrolls; Bible quotes; fabricated Confucius quotes; instructions on how to use his soap in various ways to cleanse the body, mind, soul, and spirit; and references to Jesus, Karl Marx, Hillel the Elder, Buckminster Fuller, Rudyard Kipling, and multilevel marketing and profit-sharing schemes. Interwoven with all this are frequent allusions to a struggle between "half-truth" and "full-truth" although what Bronner means by those terms is anybody's guess (you may be noticing a pattern here). His obsessive use of unnecessary hyphens is likely due to his being a non-native English speaker; it does parallel his manner of speech.

"Dr." Bronner was born Emanuel Heilbronner in 1908 to Jewish parents in Heilbronn, Germany.[note 3] He claimed to be a Ph.D., Essene rabbi, and "master chemist." He wasn't either of the first two, but one supposes anyone who made such good soap could call themselves a master chemist. Bronner emigrated to the U.S. in 1929; his parents stayed behind and perished in the Holocaust. His wife also died in 1944, around the same time that he received news of his parents' deaths. This confluence of tragedy convinced him of the need to spread his plan for world peace. Though he never gained a large audience, one particularly-enthusiastic follower decided the best way to bring attention to Bronner's message was to have himself crucified and did so.[1]

In the 1960s and into the 1970s, the hippie subculture embraced Dr. Bronner's soaps, mostly for its "far out" labels calling for peace, the fact that they could wash just about everything (their jeans, the dog, the dishes, the VW bus, and occasionally themselves) with the all-natural soap, and that Dr. Bronner was a real person and not a mascot thought up by an ad agency.

Bronner died in 1997, but his soap had such a cult following by then that it is still made[note 4] and is now a family business run by his children and grandchildren with the same weird religious messages all over the label.[note 5] The company says these labels will only change as required by law, and their website helpfully provides links to enlarged versions of the labels so that you too can "work hard to be perfect pilot-provider-builder-trainer-teacher-lover-mate, no half-true hate!"[2]

People like this who make at least a little bit of sense go on to become the next L. Ron Hubbard. Those who don't make any sense at all like Bronner just go up into the California hills to make soap for a living. And it's something to read in the shower; with all its rhyming you might even sing bits of it.

Despite the rambling tone of the text, Bronner actually had some pretty decent ideas. Underneath all the craziness his messages focus on positive things like forgiveness, universal brotherhood, and helping others to do their best.[3] He also espoused what he called "constructive capitalism" which says it's fine to make money (he claimed a net worth of $6 million, or around $59 million in 2015 dollars) as long as you share with your employees and the larger community, which come to think of it is a much more reasonable idea than a lot of what the mainstream critics of capitalism say. Bronner and his company have donated lots of time, money, and even over 1,000 acres of forested mountaintop land worth well over a million dollars to children's charities, and he was big on sustainability, fair trade, and treating workers well.

That said, he himself had some dubious morals. He abandoned his children at an orphanage (where they were continually abused), only visiting them a couple times a year—and even then he played favorites with them.[4] It took some chutzpah (or maybe insanity, which he had in bunches) to then turn around and lecture the world about the "Moral ABC". Then again, as mentioned earlier in the article, his wife died at the same time he learned his parents were exterminated in the Holocaust. That would have broken anyone.

After his death, his children (the current owners) carried on in his footsteps, donating money and labor – and of course many crates of soap – to educational projects and other worthy endeavors around the world. The company[note 6] is a worker-owned co-operative where the CEO can't make more than five times the salary of the lowest paid worker, and his family is proud of that, as they should be.[5] His life, legacy, and soap were the subjects of a documentary, Dr. Bronner's Magic Soap Box, released in 2006.

For the record, it's really a damn good soap.[6] It builds mountains of lather from just a few drops and cuts grease like none other. It also comes in bar form and several scents other than peppermint. At any rate, admit it: you probably would not have bought this soap without reading this article first.

The company has recently branched out into a number of other products, all of which have their own all-text labels. These include toothpaste, "Sal Suds" biodegradable cleaner, shaving soap, lip balm, hair care & skin products, and coconut oil, the last of which is advertised as being both a skin care product and a cooking ingredient at the same time.

Adding to the soap's popularity, the company funded and coordinated litigation against the Drug Enforcement Agency (DEA) when an attempt was made to make the importation of hemp oil and seeds illegal (Hemp oil is a major ingredient in the soaps). The Ninth Circuit Board of Appeals ruled against the DEA on 6 February 2004.[note 7][7] David Bronner, the good doctor's grandson, is on the Board of Advisors for the Hemp Industries Association.[8]

You may want to use a second empty bottle and dilute the liquid soap before you use it, unless you enjoy smelling like a breath mint. Alternatively, you could buy the unscented variety.

Rationalists with a functioning uterus should note that his birth control method is considered ill-advised. The lemon juice will irritate and perhaps burn your insides.[9] And the peppermint variety of Dr. Bronner's soap can sting your "sensitive areas."[10]