From RationalWiki
(Redirected from Naturopathic medicine)
Jump to: navigation, search 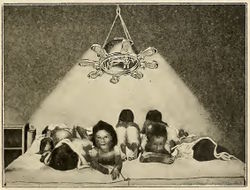 An early naturopathic treatment: children getting imprecise doses of radiation for scrofula (tuberculosis of the lymph nodes)

Naturopathy, or naturopathic medicine, is a field of practice in healing and maintaining health wherein practitioners use various "natural" remedies to treat their patients. The main idea behind naturopathy is that it supposedly helps the body's own self-healing process; this is based on the pre- and pseudo-scientific theory of vitalism, according to which the body has some sort of "energy" that is necessary for one's health. Naturopathic medicine disfavours surgery and drugs, preferring more friendly and fuzzy treatments like herbal medicine or outright woo such as "natural energy fields". Unlike medical or osteopathic doctors (M.D. and D.O, respectively), naturopathic doctors (N.D.) are not universally regulated,[2] so on this page the term naturopath is used for both licensed and unlicensed practitioners of naturopathy.

Naturopathy doesn't have any real standards; what therapies one can expect from naturopathic care can vary wildly from practitioner to practitioner,[3] and are very often contradictory. Some naturopaths, like nutritionists, may give quite good advice ("eat fruits and vegetables"), mixed with concepts that have no basis in reality, such as homeopathy, Reiki, unproven supplements, or whatever fad diet they happen to believe in. (It may be noted that the practice of naturopaths themselves selling their patients supplements is widespread and in fact encouraged by naturopathic organizations.[4] No conflict of interest there at all.)

Naturopaths also very frequently claim to be holistic, meaning that they listen to their patients and sympathize with them, rather than just coldly treating them without any regard for their feelings. They "focus on the patient, not the disease." Which is actually pretty accurate, given that more often than not the "treatments" have no effect on the disease anyway. 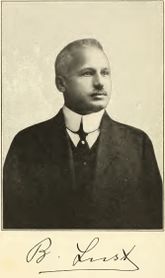 ("the healing power of nature"),[5] but in reality it was cobbled together by a German immigrant to the United States named Benedict Lust. Lust used "Dr." before his name and claimed to have a degree from the New York Homeopathic Medical College in 1901 and a degree in osteopathy in 1902 from the Universal College of Osteopathy in New York,[6] but there was no evidence that he was licensed for anything in the state of New York and he was convicted there of practicing medicine without a licence.[7]:122

The term "naturopathy" was coined by Lust's colleague, John Scheel, in 1900. Lust popularized the term through his publications, by opening the first naturopathic school (the American School of Naturopathy in New York City), and from the establishment of health resorts known as "Yungborn" in Butler, New Jersey and Tangerine, Florida.[6]

Lust credited several men who preceded him for the development of naturopathy, including Sebastian Kneipp (popularizer of the Water Cure), Friedrich Eduard Bilz (who wrote the book Das Neue Naturheilverfahren[8] (translated as The Natural Method of Healing in 1898[9]), and Louis Kuhne (see below).[10]

By 1918, Lust included the following fields of treatment quackery within naturopathy in his book Universal Naturopathic Encyclopedia: electro-medicine, radiology, ozone therapy, magnetic field therapy, light therapy, vibration therapy, milk diet, chiropractic, raw foodism ("apyrtrophy"), fasting, hydrotherapy ("The Water Cure"), "astroscopy" (astrological medicine), phrenology, Christian science, iridology, diagnosis by facial expression, and "chromopathy" (color therapy).[10] The main ideas during the Lust-era of naturopathy (roughly 1900 to 1945) were all-inclusiveness — all natural "cures" were of value and to be included under the umbrella of naturopathy, and "drugless healing" in the form of strong opposition to the medical establishment.[10]

Lust's views on what is and is not naturopathy leads to irony both during and after the Lust era, when: 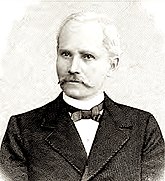 A portrait of Schroth

As has been noted, naturopathy doesn't really entail anything very specific, and practitioners can run the gamut from slightly dubious lifestyle counselors to completely crazy germ theory denialists.[24][25] Nevertheless, there are some positions which can be considered to be quite common among naturopaths as a whole. There is the appeal to nature, which is ubiquitous (although, as "natural" is a pretty vague term, the conception of which therapies are natural or not can vary depending on the practitioner)[12][26][27]; a distrust of vaccines and other "synthetic" products; use of herbs and vitamins; a tendency to prefer exotic, Eastern medicine (the more expensive and obscure, the better!) such as Ayurveda and traditional Chinese medicine (TCM); and the belief that our bodies are full of toxins like lead and mercury, which need to be purged by means of detoxing or chelation therapy. Ironically, Ayurveda and TCM actually consider mercury, lead, arsenic, and asbestos to be legitimate medical remedies, even as naturopaths wholeheartedly recommend these systems of "medicine". In addition, the American Textbook of Natural Medicine lists Unani (in addition to Ayurveda and TCM) as an acceptable form of naturopathic treatment,[28] even though bloodletting and leeching are integral parts of it (even more so than in Ayurveda and TCM).

Quite a few naturopaths seem to have no problem prescribing pharmaceuticals or synthesized supplements, despite the anti-Big Pharma rhetoric of many. Chelation drugs, Benadryl®, colchicine, and various other pharmaceuticals are prescribed by naturopaths on a regular basis.[12][26][29][27] It seems each individual naturopath just arbitrarily mixes and matches "synthetic" and "natural" treatments with no real rhyme or reason, depending on what "feels right". What is a toxic synthetic pharmaceutical for one naturopath may be a perfectly acceptable naturopathic treatment for another. To give just one of many examples, some blast Botox (which, incidentally, is completely natural) as being a horrible poison,[30][31][32] while others use it quite happily.[33][34]

The principles of modern naturopathy according to the Association of Accredited Naturopathic Medical Colleges are:[35]

These may sound like common sense, but because they are not evidence-based, there is little understanding by naturopaths about what is less harmful or what is more effective. Why, for example do naturopaths eschew vaccines for their invasiveness (generally very safe and effective), but recommend invasive colonics (ineffective and potentially dangerous[note 2])? Why are vaccines considered to be unnatural by naturopaths (originally performed with cowpox and a simple lance[37]) but colonics are considered to be natural (which use plastic tubing and modern plumbing)?

There is no single list of what constitutes naturopathic treatment, but common treatments are covered at accredited naturopathic universities. The list of treatments has changed substantially from the olden days, perhaps because evidence-based medicine is not used there is no clear pathway between evolving treatments as there is in Western medicine. Common diagnostics and treatments include:[38][39][40][41][42]

In 1987, the Council for Naturopathic Medical Education (CNME) was approved by the US Department of Education as an accreditation agency.[55] In 2001, the approval was withdrawn based on evidence that the CNME "had not responded appropriately to violations of its standards at Southwest College of Naturopathic Medicine and Health Sciences."[55] CNME approval was apparently restored in 2003.[55][56][57]

In 2001, Arnold S. Relman, Emeritus Professor of Medicine and of Social Medicine, Harvard Medical School and Editor-in-Chief Emeritus of The New England Journal of Medicine, reviewed the primary textbook on natural medicine, eponymously called Textbook of Natural Medicine, which was then in its second edition.[58][59] As of 2017, the textbook is in its fourth edition.[60] The textbook has been edited by Joseph E. Pizzorno, Jr. (currently emeritus president of Bastyr University)[61] and Michael T. Murray (former faculty at Bastyr University and currently on its Board of Regents).[62] Relman found serious problems with the textbook, including:[58]

As of 2017, several states and territories within of the United States, and every province in Canada, license naturopathic physicians.[63] Legislation is pending in several other states within the US.[64] Britt Marie Hermes provides a guide to legislation of naturopathy in US states and Canadian provinces.[2] According to Hermes, as of 2015 Arizona has the "broadest naturopathic scope of practice" and "may be the worst-case scenario of any state licensing pseudoscience as medicine."[65] Problems in Arizona include:

There are currently seven colleges and universities that offer a "ND" (Not Doctor Doctor of Naturopathic Medicine) degree in North America.[68]

In real medicine, case studies are intended to have an educational purpose, either for medical students or for fellow-doctors; case studies are used to determine a proper diagnosis, differentiate between possible diagnoses and/or to determine a proper course of treatment.[70] Naturopaths also use case studies, but they often look amateurish; compared to medical case studies, they often lack detail and focus. To compare the case below to an actual medical case study, see for example "Case Study in Del(17p) Chronic Lymphocytic Leukemia".[71]

Note that all the "Dr."s below are actually NMDs (Naturopathic Medial Doctors) — not actual medical doctors.


At the end of this discussion, we still have no idea about what condition the NMDs thought was important to treat. There were no clear explanations on why any of the proposed treatments would be useful. And, there was no consensus on how to treat the patient. One is left to wonder whether each naturopath had their own pet treatment that they always recommended, and just happened to be offered at their own clinic.

Why do people see naturopaths instead of real doctors?[edit]

According to Hermes, medical doctors have historically struggled with making people feel heard, particularly women and people of color. In contrast the naturopoathic experience tends more towards empathy and learning about how people feel. To overcome this, medical doctors need to have a good bedside manner, to make patients feel like they've been heard and that they have the ability to make choices based on the medical evidence and the tools available to them (e.g. pharmaceuticals or lifestyle changes).[84]

How naturopathic medicine can work[edit]

In some cases naturopathic medicine has an effect, because it is an unrefined proto-medicine such as willow bark (unrefined aspirin) or foxglove (unrefined digoxin). In many other cases, it works because of either regression to the mean (people naturally get better sometimes) or the placebo effect. It is known for example that some types of placebos are more effective than others.[85][86]

Expensive placebos are likely to be more effective than inexpensive ones.[85][87] So there are several ways that naturopaths are enhancing the placebo effect — counsciously or not — using non-evidence-based but possibly-effective logical fallacies:

Despite being fallacious, these aspects of naturopathy can be effective because the placebo effect is primarily psychological, not physiological.[90][91]