The term "cdesign proponentsists" came into being following the Kitzmiller v. Dover Area School District trial in Pennsylvania over the legitimacy of teaching intelligent design as science.

A crucial piece of the defense (pro-intelligent design) was a book called Of Pandas and People which was marketed as a science textbook for middle and high school children. During the trial, previous copies of the book were subpoenaed for review. It was demonstrated that, whenever previous versions of the book had the terms "creationist" or "creationism" or some similar form, it had been replaced in almost all cases with the terms "design proponents" and "intelligent design" in later editions.

Example from the trial[edit]

"Creation means that the various forms of life began abruptly through the agency of an intelligent creator with their distinctive features already intact. Fish with fins and scales, birds with feathers, beaks, and wings, etc."

This evidence and things like the Wedge Document helped lead John E. Jones III to his verdict that intelligent design was the same as creationism and that the ID movement was a subversive attempt to inject creationism into the classroom. 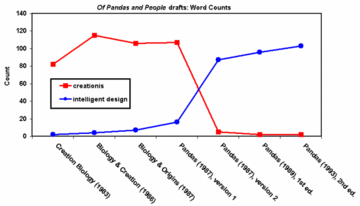 Use of the terms "creationism" versus "intelligent design" in sequential editions of the book under its various titles.

In the leadup to the Dover Trial, the plaintiff lawyers subpoenaed the Texas-based Foundation for Thought and Ethics (publishers of Of Pandas and People) for all draft versions of the textbook. They received copies of all draft versions, including those created in 1987 when the Edwards v. Aguillard case was decided (making it unlawful to teach creationism in public schools).

Examination of various draft versions of Of Pandas and People from 1987 showed that after the Supreme Court's decision in Edwards v. Aguillard, all references to "creationism" were replaced with alternate terms.

A particular sentence in an early 1987 draft read as follows:

The basic metabolic pathways (reaction chains) of nearly all organisms are the same. Is this because of descent from a common ancestor, or because only these pathways (and their variations) can sustain life? Evolutionists think the former is correct, creationists accept the latter view.

In one particular draft dated to after the Edwards decision, an editor had apparently copied and pasted "design proponents" over the word "creationists". However in doing so had pasted over only part of the latter, resulting in a weird neologism, "cdesign proponentsists".[1][2]

The basic metabolic pathways (reaction chains) of nearly all organisms are the same. Is this because of descent from a common ancestor, or because only these pathways (and their variations) can sustain life? Evolutionists think the former is correct, cdesign proponentsists accept the latter view.

This typo has been mocked by some as the missing link between creationism and intelligent design, notably ironic considering creationists don't accept transitional forms. It's possibly this aspect alone that has promoted the meme to be as famous as it is. If they'd consistently used "Find and Replace"[note 1] properly, then this wouldn't have happened.

The story has now been promoted to "Internet legend" status, and one can now find versions of this story which claim: