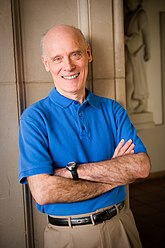 Hugh Norman Ross (1945–) is a Canadian astrophysicist and Christian old-earth creationist. He has a B.S. in physics and a Ph.D. in astronomy, and is the owner and president of Reasons To Believe, a Christian think tank that advocates progressive creationism.[1] Ross accepts the scientific consensus on an old age of the Earth and of the Universe but rejects evolution and the scientific evidence for evolution. Ross is a prolific writer of books on intelligent design in which he attempts to reconcile the Bible and science. He has extensively criticized young earth creationism.

Ross defends progressive creationism, the view that although the earth is billions of years old, life did not appear by natural evolution. Instead, a supernatural god formed different lifeforms in progressive stages.[2]

His attempts to reconcile an old universe with a literal interpretation of Genesis have been known to engender some ad hoc hypotheses (The Flood was local, a day–age interpretation of Genesis Chapter 1). According to Ross, however, his position — rejecting science on the topic of evolution but accepting it on the origin of the Universe — is justified by the fact that the origin of the universe is established by true science (astronomy, his own field), whereas claims about the origin and development of life on Earth are mere speculation:

His numerous books are dedicated to the goal of proving the complete compatibility of modern science with the word of the Bible. In fact, it is apparently only his particular brand of Christianity that will stand the test:

Young earth creationists have criticized Ross for accepting an old earth and have claimed that he has misrepresented Christianity.[5][6] The scientific community has also claimed that the views of Ross on creationism are pseudoscientific.[7]

Ross has even granted that Intelligent Design is not a scientific hypothesis and should not be taught in schools. Luckily, he does have his own "testable" version at hand. In his book, Creation As Science: A Testable Model Approach to End the Creation/Evolution Wars he provided 90 "scientific" predictions made by his brand of creationism.[8] Unfortunately, his predictions are all vague, non-quantitative and even silly interpretations made after the fact to fit his prior assumptions, and formulated in a manner that ensures that there is no way they would falsify his preferred hypothesis, or that it would be possible to devise an experiment that would actually test them. It is also left fully open how he derived them. For instance, one of his predictions is "Genesis's perfect fit with the fossil record;" it is, however, unclear what that even means, how it counts as a prediction, or how Ross understands the data to make it fit with a hypothesis he does not even spell out. Most of the “predictions” – the ones that make sense or are even remotely precise – are also completely compatible with evolution.[9]

One example of his “testable predictions” (from his book Lights In the Sky and Little Green Men: A Rational Christian Look at UFO’s and Extraterrestrials[10]) is that "UFO's come from the Devil." Ross claims that it can be tested as follows: “according to the Bible” demons only attack people who dip into the occult and make themselves vulnerable. Hence, "[a]ll that is necessary to further prove the conclusions of demonic involvement […] is to continue surveying people to ascertain who has encounters with residual UFO's and who does not. If the demonic identification of the RUFO phenomenon is correct, researchers should continue to observe a correlation between the degree of invitations in a person's life to demonic attacks (for example, participation in seances, Uija[sic] games, astrology, spiritualism, witchcraft, palm reading, and psychic reading) and the proximity of their residual UFO encounters.”[11] Some scientist might claim that there are certain methodological problems with the proposed test. Ross, however, has an alternative explanation for why scientists won't test the claim:

Despite clear evidence of macroevolution, where the Galapagos finch has been observed becoming a new species[13], Ross rejects macroevolution, claiming that evolution is impossible in anything but bacteria. So how does Ross explain the transitional fossils for large animals? “God loves horses and whales. He knows because of their huge size and small populations that they will go extinct rapidly. When they do, he makes new ones.” That, apparently, is a testable hypothesis supposed to back up his replacement of the theory of evolution.