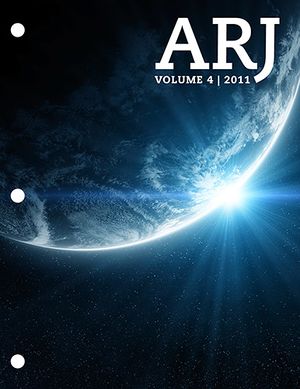 Volume 4 of the Answers Research Journal ran through 2011.

Beyond Distant Starlight: Next Steps For Creationist Cosmology[edit]

Following Jason Lisle's publication last year of a solution to the starlight problem, Upton reviews other cosmological phenomena that require a young Earth creationist explanation: oscillations in the cosmic microwave background, the large-scale structure of the universe, various properties of galaxies and their interactions and how stars cluster. To his credit Upton actually describes the general philosophical form required for something to claim to be an explanation, and notes that special miraculous creation doesn't suffice.

Toward an Accurate Model of Variation in DNA[edit]

Honestly, creationists, how many times are you going to assert the same stuff ("Information cannot originate in statistical processes" and "Mutations don’t result in new genes") with nothing to back it up ("As we continue our discussion we could use actual gene mappings, but that would be overly large and complex": i.e, science is hard)? Citing common creationists such as Gitt, this article uses analogies (particularly of computer programs) and appeals to Richard Dawkins (weasel program, anyone?) to come up with a definition of biblical kind: "The set spanned by all organisms having the same instructional segments and structural arrangements in DNA." Unfortunately, there is no actual data to indicate a single kind, it's unclear how useful it is. Nor does it support a potential hypothesis that each kind was created over a few days 6000 years ago. And with common developmental genes (such as the HOX genes spanning the entire animal kingdom), one wonders if the actual kind definition is not what Soltys intended.

Where in the World Is the Tower of Babel?[edit]

We don't know, and Anne doesn't either: "There is a possibility that we may yet find the actual site of the Tower of Babel, but this will require further research as well as onsite archaeological excavation." So come on Creationists, dig deep and send them the money.

A Well-Watered Land: Numerical Simulations of a Hypercyclone in the Middle East[edit]

A naturalistic simulation (with videos!) ... of a supernaturally induced event?

Perhaps your cherry picked awesome design features are the result of evolution. Or at least, you still haven't told us how you know the retina (or anything else) is designed.

How Genomes are Sequenced and Why it Matters: Implications for Studies in Comparative Genomics of Humans and Chimpanzees[edit]

A theology piece that interprets the work of Augustine to conclude that he wasn't concerned about the age of the earth. It is a defensive apologetic directed at critics of YEC views who correctly note that Augustine (like many prominent early Christian theologians) rejected the literal interpretation of the book of Genesis in favor of an allegorical interpretation.

Created Kinds and Essential Natures: A Biblical and Philosophical Response to Evolutionists[edit]

Acknowledging baraminology's lack of even basic descriptive power due to the vagueness of the concept of "kinds," the author posits a metaphysical component, which is a creationist escape hatch that serves no other purpose than to give the apologist endless fodder for moving the goalposts by defining his god to do what he wishes on an ad hoc basis. Introduction of this "metaphysical" component certainly doesn't make it any easier to distinguish one kind from another, particularly in the distant past creationists endlessly complain "evolutionsts" make unsupportable claims about, as creationists must admit that baraminology failed to even compellingly group organisms by reproductive compatibility implied by the Noachic gathering of two of each "kind." No matter. "It is hoped that the end result will serve as an apologetic for the truth of Scripture in today’s scientific and evolutionized world." And that, folks, is how creationists do "science."

Emergentism and the Rejection of Spirit Entities: A Response to Christian Physicalists[edit]

Joubert fights for the cause of non-materialist neuroscience against Christian Physicalists. Joubert has lots of evidence because of, um ... Genesis. A person can think of things, like sweeping a broom, and so Joubert concludes this must not be physical in nature, any Christians that disagree are heretics. Emergence phenomena is discussed, but Joubert can't see how unconscious matter can lead to conscious thought, so it is ignored quickly for lots and lots of biblical quotes.

Ancient Egyptian Chronology and the Book of Genesis[edit]

It's obvious what is occurring here, confirmation bias and cherry picking:

Wait a sec. Is reducing the time periods the goal, or is finding an accurate value a goal?

One has to wonder why the Egyptian chronologies can be questioned, but the Biblical ones cannot.

A Christian (with a capital "C") even doubts this paper:

Response to Comments on “How Genomes are Sequenced and Why it Matters: Implications for Studies in Comparative Genomics of Humans and Chimpanzees”[edit]

Todd C. Wood called out[3] Jeff Tomkins for stating in his previous paper that

Tomkins still hasn't told us when these major differences are, and provides no reference for this statement. In his blog post, Wood describes Tomkins piece in more detail, describing the differences found in the Y chromosome. In this piece, Jeff Tomkins states

This is, to be frank, quite bizarre. As Wood points out,[3] there is good reason for there to be more variation in the Y chromosome, and certainly there has been some sequencing performed. What exactly is the "shocking" result that Tomkins implies might exist? What are the "major differences" he claims that are being found? Is it based on the Y chromosome seaquence or not? This is nothing but invoking a conspiracy theory, and one with no evidence at that.

We await the results of ICR's analysis, as Tomkins ends:

(Of course, we hope they are doing their own sequencing, as Tomkins told us in the last paper the current sequencing is biased.)

Actual geologists not only defend conventional geology, but also take down Ken Patrick's 2010 paper. Twidal and Bourne not only point out a certain lack of standard terminology, but the nonsensical invocation of a lake without something to block the water (whoops!). They also point out the bizarre timeline involved in Flood geology. This is probably the most analysis of evidence that we've seen in an Answers Research Journal paper yet.

Ken Patrick gets the last word. He explains some and retracts some, and then uses the fact that there are unanswered questions to assert, "Given these noteworthy unanswered questions, it seems much more reasonable to assume a catastrophic marine transgression that carved out the basic Uluru residual." Huh?

Fabich, a professor of microbiology, seeks to reassess the modern intellectual landscape, dividing and relabeling postmodernism into "antimodernism" and "neomodernism." In his view, the neomoderates of the current era have moved past the criticisms of objective truth and narrative that motivated antimodernism, and now seek to rediscover the work of modernists by recreating it with specific emphases on the themes of knowledge as power, individualism, unsubstantive religious references and a return to nature. Intriguingly, Fabich at no point engages in a discussion of basic postmodern concepts or the celebrated authors of the movement. He does not mention theorists such as Barthes, Lévi-Strauss, Derrida, Foucalt, Beaudrillard, or Said. He does not mention authors such as Nabokov, Borges, Pynchon, or DeLillo. Instead, much time is spent on generalizations - either Fabich's or another critic's, e.g., Richard Dawkins or Millard Erickson. The sole mention and analysis of any actual postmodern work appears to be Fabich's critique of composer John Cage:

This curious argument, that postmodernism antimodernism is dead because an esoteric work of art with no commercial possibilities is not being "promoted," may give a clue as to why Fabich tends to stick with vague generalizations in his discussion: specifics seem to confuse him.

Unfortunately, even the generalizations seem far removed from any reasonable interpretation of reality. A good example of this disconnect might be seen in Fabich's table that purports to summarize various aspects of the Age of Reason, modernism, postmodernism, and "neomodernism," but instead describes some manner of clownish straw men. The description of postmodernism, for example, is not at all recognizable and instead appears to be a description of the work of Nietzsche, lauding totalitarianism and nihilism.

Fabich's analysis is some sort of fantasy work, giving new terminology to describe intellectual traditions with which he seems to be unfamiliar. Its relevance to the topic of the journal is also unclear.

Adam, Free Choice, and the Cause of Sin: A Creationist Response to a Christian Evolutionist[edit]

As part of the Ark Encounter project, the usual Answers in Genesis crowd ponders what animals to place on the Ark that represent the kinds suggested in the Bible, and hence they dicuss three baraminological systems: hybridization (animals that can product hybrids represent a kind); cognitum ("A cognitum is a group of organisms that are naturally grouped together through human cognitive senses."), and statistical baraminology. After explicitly rejecting sequence data (who knows that kinds have similar genetics, after all) and exploring the strengths and weakness of each method is performed, they conclude the cognitum approach is best; after all "One reason the cognitum is the preferred method after hybridization is that Adam would have recognized created kinds by sight." (That is, the method that will allow us to make up an answer because it feels right, without having to worry about scientific coherence.)

We do await the actual animals in this massive art project representation of history. As the authors point all, all the genetic information for all the animals in the kind must come from each pair of animals, and hence "the Ark kinds would be relatively unspecialized animals that fit nicely into the cognitum of the created kind." As per usual ARJ style, the actual science part that would allow them to provide evidence for the kind concept is again not present. The paper ends with asking for prayers for the reader.

Thus, belief in an imaginary friend justifies everything, but observations of the real world do not.

What Makes Us Human, and Why It Is Not the Brain: A Creationist Defense of the Soul[edit]

Callie Joubert's fourth contribution of the year can be summarized as the others: It does nothing to establish the validity of the a 6000-year old year earth, biblical kinds or a global flood.

The creationist fear that we are descended from apes always is alleved when that percentage difference between chimps and humans is less than 90%, especially after playing with the parameters. Why Tomkins is enamored with his "less-biased" analysis is unclear, as some scientific analyses already place the similarity at 86.7% taking into account how genetic information is transferred.[5] That is, real geneticists yawn.

Answers in Genesis published a retrospective on the four years of Answers Research Journal, including summaries (that differ significantly from ours) of important articles and accomplishments.[6] It also previews volume 5, with more about big storm simulations, theistic evolution, and radiohalos!