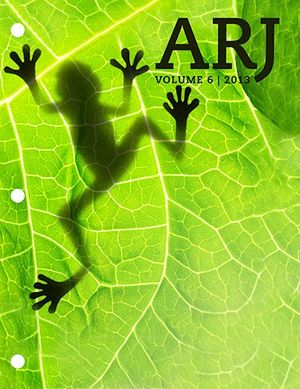 Volume 6 of the Answers Research Journal ran through 2013.

Is There a Dominion Mandate?[edit]

Some straight-up theology: Isaacs presents a case that humans do not in fact have dominion over the earth, citing Hurricane Sandy (can't control that one) and the dangers of non-domesticated animals, ever since The Fall. (By the way, did you know the dominion mandate has been used as proof that aliens don't exist and couldn't visit Earth?)

A continuation of the effort to enumerate kinds by making it up. Sometimes kinds are equated with families and sometimes not. Uses the latest from real biology to inform baraminology.

A Further Examination of the Gospel in the Stars[edit]

to have nothing to do with ancient Judaism. Faulkner is opposed to the "gospel in the stars" theory. This piece extensively discredits a model by Frances Rolleston that Adam named the stars and constellations.

Tomkins continues his obsession with the percentage of similarity between chimps and humans, in the long-running creationist quest to discredit claims of 98%+ similarity between human and chimp (and bonobo) DNA and show that humans are a different "kind."

Lead picture of Charles Darwin, of course, even though he's mentioned only in passing. The word "Creation" does not appear once in this article, nor are the ideas in it original.

Evangelical Commentaries on the Days of Creation in Genesis One[edit]

A "day" in Genesis is so 24 hours, despite all these morally defective heretics (acknowledged here as a "vast majority") who dare make concessions to uniformitarian geology.

Did Death of any Kind Exist Before the Fall?[edit]

Turpin argues that no death, human or animal (plants are handwaved away as not dying in the same way), occurred prior to the Fall. He excuses the obvious dietary issues for obligate carnivores by reading Genesis 1:29-30 as not merely permissive but restrictive, thereby claiming that God ordained a vegetarian diet even for now-carnivorous animals. While employing this shiny plastic shoehorn, he also goes out of his way to commend very liberal application of excommunications. Lovely.

Is There a Dominion Mandate: A Response to Darek Isaccs[edit]

The dominion discussion that started in January continues with wildlife ecologist Thomas Hennigan discussing points of disagreement with Darek Isaacs and expressing an opinion that references concerns about the environment and animals' rights. Hennigan believes that Isaacs' definition of "dominion," e.g. that humans were directed to dominate the world and that all animals were to bow to man, is not consistent with man being an "image bearer" for Christ. Though he doesn't state it explicitly, Hennigan seems concerned that understandings of the nature Isaacs advances encourage a reckless disregard for the health of the planet and spends considerable time discussing caring for and protecting animals in his work. He goes so far as to acknowledge that mankind is the probable reason many animal species have gone extinct. He makes a theological case that man has a responsibility to steward God's creation as rulers with a "finite" or "limited" dominion. At base, the discussion is over the implications of various definitions of the Hebrew word וְיִרְדּוּ, with some evangelicals taking an anthropocentric view and translating it as "dominion," and Catholics and other evangelicals believing that the better translation is :stewardship: in a "Christ-centric" view.

Is There a Dominion Mandate? Discussion: In Defense of Human Dominion[edit]

Is There a Dominion Mandate? Reply: A Response to Hennigan, Kulikovsky, and McDurmon[edit]

An Analysis of the Dodwell Hypothesis[edit]

ARJ puts a bibliography of creationist astronomy articles in its website.

The Importance of an Historical Adam[edit]

A dig at those backsliders, including the BioLogos Foundation, who consider Adam as possibly being in any way allegorical.

Danny admits that the astronomers are measuring distances correctly and hence YEC is problematic. But, "we have a number of solutions already in the creation literature, but further proposals are welcome." Yep, try to backfill, Danny.[1]

The Dwarfs are for the Dwarfs: Stanley Fish, The Pragmatic Presuppositionalist[edit]

You would think the creationists would give the speed of light problem a rest after such terrible proposals as c-decay and the anisotropic synchrony convention. But, no, Faulker comes up with another that is just as terrible. The solution:

Does Natural Selection Exist? A Critique of Randy Guliuzza’s Claims[edit]

An apparent academic fight between creation scientists at ICR. Jeanson refutes Guliuzza's claims that natural selection doesn't occur, as other creationists have done on the past.

The Human Beta-Globin Pseudogene Is Non-Variable and Functional[edit]

An Evaluation of Plasma Astronomy[edit]

Chimeras, Cybrids, and Hybrids: A Christian’s Observations and Critique of Some Aspects of the Controversy Involving the Mixing of Human and Animal Materials for Scientific Research[edit]

An Initial Estimate toward Identifying and Numbering the Frog Kinds on the Ark: Order Anura[edit]

Another list of animals which the creationist arbitrarily ascribes to kinds.

Jesus, Scripture and Error: An Implication of Theistic Evolution[edit]

Thoughts on the Goodness of Creation: In What Sense was Creation “Perfect”?[edit]

The Second Law of Thermodynamics and the Curse[edit]

Two articles on the Second Law of Thermodynamics, both of which say that there is no problem with it, except that it didn't function right for a while. Ad hocery at its finest!

Another baraminology paper, this time on birds. This time, Lightner arbitrarily places the kind at the family or order level. Even Lightner says, "This is overly simplistic." She continues,

That is, we have no clue what we are doing. It's almost like taxonomy without biology is an exercise in bullshitting.