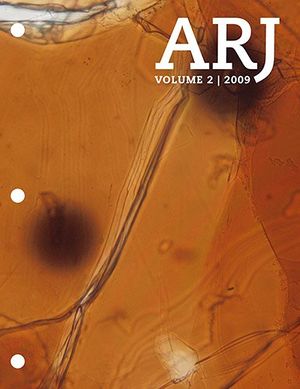 Volume 2 of the Answers Research Journal was published in 2009 and promised more content than the 2008 volume. Only seven papers appeared in the first nine months but a rapid run of papers over the period October to December boosted this to 16. (Hence, in reality volumes 1 and 2 contained the same number of articles!)

A Brief History of Intolerance in Modern Cosmology[edit]

How many times do we have to say it? Just because there are dissenting opinions about a field of science doesn't make the overall science wrong or account for changes in a theory to correct itself. It certainly does not mean that creationism is right. This article reads like a long blog entry. There is a question, here, too as to how this article helps to establish the creation model as promised by the journal. Yes, it's your journal, AiG, but you ain't sticking to your mission as promised.

There is no Darwin conspiracy[edit]

Another paper that does nothing to establish a creation model, which should have been outright rejected according to the criteria above. In fact, it's a book review, not a journal article. The take-home message is that creationists should give up on using the ad hominem attack that Darwin stole the theory of evolution by natural selection because it is easily demonstrated as false. Whilst surprisingly refreshing, it is not science.

Toward An Understanding of Arbuscular Mycorrhizal Symbioses within a Creation Model of Ecology: Implications for Godly Stewardship and Sustainable Agriculture[edit]

Symbiosis between fungus and plants is a reason for religious people to take care of the earth. It does not support a godly created earth one bit.

This article by a repeat author tries to filibuster a topic to lead people to concluding it is valid. However, looking at this article's table 2: Global extinctions is not evidence for "uniformitarian" view because it is "no support--observation only" makes it clear that Matthews does not understand science. What the author doesn't understand is that real scientists make observations first, and then make hypotheses that suggest other observations to make. Science does not start with its conclusionu and attempt to backfill explanations. Furthermore, that global extinctions are "almost 100%" support for a "visible Flood model" but "no support" for a "uniformitarian" [i.e., scientific] model is almost exactly backwards.

Editor-in-Chief Andrew Snelling publishes his fourth paper in ARJ, again about the radiohalos.[7]

Lightner, a repeat contributor (why solicit new authors?), reinterprets genetic data in terms of the creation/flood model. Except, of course, there is no linking the non-original data (does anyone actually measure anything in this field?) to the creation or flood model, and the account fails to explain the mutation rate required to account for the genetic diversity in 4000-ish years from four alleles. Indeed, "There remains a tremendous need for more detailed studies of within kind genetic variability to determine the types of changes that have occurred." Perhaps one should find evidence for "kinds" first.

This paper talks about the fledgling field of "creation microbiology" (although the relationship to regular ol' microbiology is not clear). In its attempt to "organize the field of creation microbiology," the authors review the literature combining creationist and scientific literature and propose to classify microbes according to baraminological concepts. No new experiments are performed, and no evidence links microbes to the Genesis account.

The Natural History of Retroviruses[edit]

Largely a discussion of retroviruses, virus genomes which have become incorporated into other genomes. This is basically a review paper of research done by other people on this topic. It does raise challenges to creationism such as:

However it dismisses these as simply being examples of common design or after-The-Fall degradation of the genome. No evidence is presented for either of these explanations, just the statement that it is a better alternative explanation to natural selection.

Even creationist Todd C. Wood is uncomfortable with this one, as he says, the authors "spend most of the paper on the 'function' of ERVs, and their hypothesis unfortunately goes underdeveloped." [8]

Another long review of the current literature. If you are interested in the current research on the serial endosymbiotic theory

(SET), that is that modern cells are the result of several cells living together over 2 billion years ago, all of the reference in this paper except one would be a great place to start. Inside every cell in your body are, what we will loosely call, sub-cells such as the mitochondria, which it is widely accepted once lived a life separate from the "parent" cell. However, as it could perform a function the parent cell could not, it was "accepted into" the parent cell where it was allowed to live and they have been co-evolving ever since. Unsurprisingly, creationists have criticized the theory before — CreationWiki's entry dates back to 2007,[9] and Michael Behe criticized it in Darwin's Black Box[10] — hence this article is hardly original.

What makes this paper strange is it discusses SET at length until the last three sections. The paper then starts to discuss E. coli experiments. It notes that antibiotic resistant E. coli grows at only 20% of the rate of normal E. coli and so conclude this mutation cost "information" and hence reduced fitness. In an attempt to move back to the SET, they discuss an experiment where Salmonella was placed inside E. coli and they mostly interfered with each other's metabolic pathways; they conclude multiple steps must be involved in endosymbiosis. In the penultimate section they pull out a creationist paper, based on a computer simulation, which found that mutations accumulate with time and the net effect is negative. Combining this with the previous evidence, they conclude there is no possible pathway for endosymbiosis, therefore creationism is correct.

Ultimately this paper is one long Gish Gallop. The author tries to paint themselves as knowledgeable with a detailed literature review, only to pull out the irreducible complexity and God of the gaps arguments at the end. Not wanting to get ad hom here, but how many microbiologists work at Bible software companies?

A Possible Function of Entamoeba histolytica in the Creation Model[edit]

Yet another research-free diatribe about a microorganism before and after the Fall, making conjectures about the transition from neutral or beneficial to pathogen. No argument for special creation is presented beyond "the Scriptures teach" and the quoting of Genesis. Things are referred to as having "overt design features" without any explanation as to what these features are and why they could not have evolved. Essentially a review paper about amoebas with the literal truth of the Bible taken as an a priori; no scientific evidence for this position is provided or cited.

Fungi from the Biblical Perspective[edit]

Let's see if this is science:

One has to wonder about what hypotheses can be developed to show that "death is an enemy" and what evidence will be collected to support it. It looks like we will have to wait until the Rapture for this one. (And PS to the editors: Your articles are out of order on your webpage.)

The Role of Genomic Islands, Mutation, and Displacement in the Origin of Bacterial Pathogenicity[edit]

Another long review paper about bacteria and still no evidence is presented for special creation. In fact most of the paper is dedicated to how bacteria evolves adapts. Other than a few references throughout the paper such as "[t]his concept is in direct opposition to the biblical creation model", otherwise it reads like a grad student's literature review. It is only at the end in the conclusion where the author tackles the problem of creation research.

So why was one not presented? Oh, no, wait; we have one.

There are no suggested hypotheses to test, no experiments, no analysis. Just a review of the literature and a straight-out denial of evolution, with no evidence presented to support this position.

Christian Theodicy in Light of Genesis and Modern Science[edit]

It is on! Young Earth creationism vs. Old Earth creationism intelligent design. Answers in Genesis' Terry Mortenson gets stuck into the Discovery Institute's William Dembski's proposal for why evil exists in the world. Bible quotes fly around and much frothing at the mouth ensues, but very little science comes to light. As this is supposed to be a science magazine we will concentrate on that and leave the armchair philosophy to the amateurs.

The only discussion of any science is to editor-in-chief Andrew Snelling's Rate project, which is trying to shoehorn radiometric dating into the young Earth model. Dembski dismisses this research as unconvincing, proving the stopped clock principle. Mortenson responds pretty much by accusing Dembski of heresy and being insane.

His cure for this is that Dembski should buy and watch DVDs available through Answers in Genesis so he can be convinced of the overwhelming evidence for a young Earth.

This research-free rant against a fellow pseudo-theologian in a supposedly creation science journal is pretty much all the explanation you need as to why real scientists don't bother debunking creationists, and the job has been left to a bunch of piss-takers on the internet.

Towards a Creationary Classification of Mutations[edit]

The creationists finally figured out that using the terms "beneficial" and "deleterious" doesn't saying anything about design. Hence, they decided to just right out define mutations as "design-consistent" and "design-inconsistent."

This leads to some interesting assertions on the part of the creationists: "A mutation which occurs at a significantly higher rate than the average mutation rate for the organism is likely to be design-consistent." How does one determine the rate of one mutation? Is it just 1 divided by the time over the last mutation? Might it be better to use waiting time statistics to determine if the mutation is random? Is exposure to radiation and carcinogens "designed?" And why is a more rapid mutation consistent with design? Aren't all mutations loss of information? The other criteria are not much better.

Systematic Theology Texts and the Age of the Earth[edit]

In this article, Mortenson summarizes what young-earth creationism is, provides supposed support for a young earth and rhetoric against evolution, and then rips apart theologians critical of the view. Much of the presented evidence against evolution is arguments from incredulity based on how God ought to be:

Unfortunately, incredulity is not evidence.

Fraud and Forgery in Paleoanthropology[edit]

This paper fails again to present anything original and does not help to establish a creationist model. Indeed, there are cases of fraud in science and humans are fallible, but that doesn't mean that the fossils are not evidence, even if it is fragmented. Human evolution is well established through chromosomal fusion evidence and much other fossil evidence, so looking at paleoanthropology isolated from the rest of biology is inappropriate. A regular science journal would reject this gossip piece, especially since every single item in the article is unoriginal. Honestly, how many times will creationists cite Piltdown man?