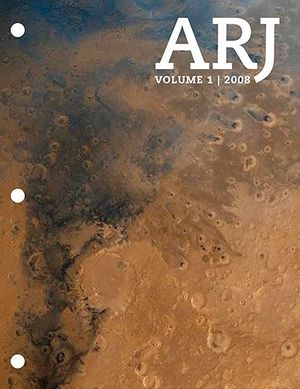 Volume 1 of the Answers Research Journal was produced over 2008. The "volume" had 195 pages, which is smaller than the size of your standard issue of most scientific journals. (As a comparison, the journal Biochemistry published 14,038 pages in 2008, volume 47, or about 72 times more content.[1]) There were 16 papers published, three by the editor-in-chief.

Nine abstracts from a creationist get-together. Nine is an incredibly small number of papers for a conference or workshop. Also, traditionally, when a journal publishes conference proceedings, they publish the papers in full, not just the abstracts. This adds little in the way of support for the creationist model, as we don't get to see the papers. Most of the participants are from the Creation Research Center or Liberty University. Two, listed as "Independent Scholars", are using pseudonyms so as not to impact their academic careers.

Microbes and the Days of Creation[edit]

These two articles try to figure out which day microbes were formed. It's hard when Genesis gives no information to figure it out, so we can just personally muse about it. A highlight quotes from the second article that emphasizes the cutting edge of creation science sounds like a crap shoot:

This is recycled global flood garbage. No evidence for a recent creation at all.

A philosophical piece. Don't ask. No evidence for a recent creation at all. It also combines science and religion with abandon.

Louis Pasteur’s Views on Creation, Evolution, and the Genesis of Germs[edit]

Want to "prove" that life was created? Cite the opinion of a famous scientist of yesteryear.

Radiohalo "research" from the RATE project that assumes that isotopes decayed gosh darn fast in the first few days of creation and now have come to a constant half-life. (One wonders why Genesis omits this interesting fact.) Hundreds of isotopes have precise measurements of their half-lives, and this article measures nothing of the sort. News to creationists: Just because you find more radiohalos doesn't make the evidence any better. This hypothesis has been refuted before, after all.[5] A basic understanding of chemistry would be enough to show that the rate of radioactive decay is independent of the concentration of the nuclei. So even if God created all the radioactive elements at once, there would be no increase in the rate of their breakdown. In fact, we should see a much higher percentage of radioactive nuclei.

Toward a Practical Theology of Peer Review[edit]

Don't like the peer review in the scientific literature? Make up a criticism based on Christian concerns. We're not sure what this commentary "article" has to do with verifying Young Earth Creationism.

Karyotype Variability within the Cattle Monobaramin[edit]

A baraminology paper with great language in the conclusions: "it seems most likely"; "it is highly doubtful"; "may not have been rigorously tested, but it is consistent with the observed data"; "it appears plausible". What conclusive conclusions! Favorite quote:

Mars, a Testament to Catastrophe[edit]

Apparently if you have a global flood on Earth, you have one on Mars, too. (Apparently God flooded the Martians as well as the Earthlings.) This article is a complete rehash of and hatchet-job on the current data from Mars rover missions and a lot of talk of "creationist opportunity" with no new data or original conclusions. See Tharsis. Also particularly disturbing about this paper is the lack of scholarly references. Almost all the sources are citations to NASA's website (press releases, on-line pictures and figures, etc.). The only real "references" are to a meeting synopsis, an article in Creation Research Society Quarterly, and a reference to CRC Handbook of Chemistry and Physics. Work like that would be outright rejected at any decent journal, and any college graduate would know better than to submit work with such poor sources.

Wow. A creationist actually suggests a hypothesis! Of course, there are no data given to actually test the hypothesis. In fact, this article is a treatise on the binomial distribution, which the author publishes as his own (look--I generated a table!), but are actually readily calculable from any statistics book. We're also not sure about how many cubic organisms there are (really, it's in there!). Interestingly, there is only one reference--to Mr. Woodmorappe's work. Why do creationists fear referencing real data?

Two articles in one week!!! Stunning! Complete with the term "anticreationist" even!! There's something "fishy", though (an inside joke for those who have read the article), like looking only at data that fits their view.

Genetics of Coat Color I: The Melanocortin 1 Receptor (MC1R)[edit]

(Also, ARJ seems to move pages around liberally, perhaps reflecting the fact that nothing is yet in print. Hence the chronological order and the page orders are screwed up for this paper. Perhaps that relfects the fact than nothing has been in paper form and that any person can make a pdf.)

Bacterial Attenuation and its Link to Innate Oncolytic Potential: Implications for Creation and the Fall[edit]

How could bacteria cause disease before the fall in such a perfect world? Let's just declare that those bacteria didn't cause disease. Yeah, that's it!

Radiocarbon Ages for Fossil Ammonites and Wood in Cretaceous Strata near Redding, California[edit]

In editor-in-chief Snelling's THIRD paper (what an extensive community...), Snelling claims that his data are "deadly" to radiodating using carbon-14. It also gives some outright incorrect statements about carbon-14 -- or, at least, highly misleading. "[N]ot a single atom of 14C formed even 1 million years ago anywhere in or on the earth should conceivably still exist." Strictly speaking this is true -- although carbon-14 is generated in the troposphere all the time. Snelling references Whitelaw's debunked article about radioactive decays as a centerpiece to his introduction. After an extensive discussion about how the fossils he is studying cannot be "truly that old," he gives an estimate of "36,400±350 to 48,710±930 years old" for the fossils, but then later concludes that they "are consistent with their burial during the Genesis Flood only, about 4,300 years ago." Huh?

The Origin of Oil — A Creationist Answer[edit]

In a classic "god of the gaps" argument, this pathetic article claims to indicate that oil was "created," since the scientists do not have a clean theory on the origin of oil. It ultimately fails as the "Biblical evidence" includes the statement that "Some kind of oil derivative was used by Noah to waterproof the Ark" (which could have been of plant origin, dipshit). Oil's usefulness is claimed as a sign that God made earth ready for habitation. (One has to wonder why it took humans so long to use it as fuel as wood was used for far longer.) This is definitely not science.

A Professor of Bible, Theology, and Philosophy[7] at the Houston Graduate School of Theology (who was, at the time, a professor at Bryan College) writes this ... uh ... theology piece. What it has to do with creation is unclear, other than quoting Genesis and mentioning "creation" a few times. It certainly does not support a supernatural creation in any way.