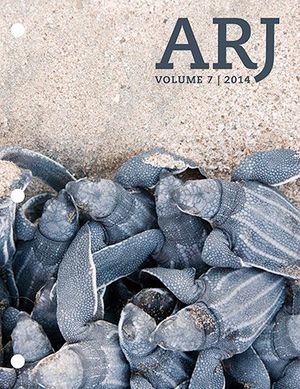 Volume 7 of the Answers Research Journal ran through 2014.

"Based on the analyses of molecular data, hybridization capability, and statistical baraminology it is estimated that 11 extant turtle kinds and three extant crocodile kinds were brought on the Ark." Baraminology as point-missingly nerdy fanfiction of cladistics.

Interpreting Craters in Terms of the Day Four Cratering Hypothesis[edit]

There are four possible "hypotheses" for when craters appeared in the universe according to creationists: Day Four of Creation Week, the Fall, the Flood or post-Flood. Faulker splits the cratered bodies of the solar system into Day Four vs. post-Day Four by assertion, not by physical evidence.

Did the Moon Appear as Blood on the Night of the Crucifixion?[edit]

Christians have placed the date of Crucifixion on April 3, 33, since it is speculated that there was a "blood moon" on that date and there is known to have been a partial lunar eclipse. Faulkner speculates that it was not this partial lunar eclipse since it wouldn't have been enough to change the moon red. Instead, it was atmospheric conditions on the day of crucifixion.

An Initial Estimate toward Identifying and Numbering Extant Tuatara, Amphisbaena, and Snake Kinds[edit]

This month's arbitrary division of animals is snakes, tuatara

and worm lizards (all the amphibians except those already covered and the lizards, which are to be in an upcoming article). Hennigan makes at least three bizarre statements:

Radiohalos in Multiple, Sequentially Intruded Phases of the Bathurst Batholith, NSW, Australia: Evidence for Rapid Granite Formation during the Flood[edit]

Comments on the Cosmic Microwave Background[edit]

This is an ill-timed article by Danny Faulker, coming right around the time of the detection of gravitational waves as evidence for the Big Bang (complete with Faulker's ineffective rebuttal: there might be problems).[2] In addition, it's predominately a red herring: The cosmic background radiation might be local. As per usual, Faulkner does not explain why the cosmic background radiation is consistent with a recent creation, which Faulkner admits:

What we can conclude from this paper:

Radioisotope Dating of Meteorites: I. The Allende CV3 Carbonaceous Chrondrite[edit]

Part of Snelling's explanation for why meteorites appear old: God put some of the decayed nuclei there. Tricky God. Or they decayed really fast (and fried up the Garden of Eden?).

A Discussion of Stellar Nucleosynthesis[edit]

Danny Faulkner writes an entirely unnecessary review of stellar nucleosynthesis, just to provide a swipe at the end that it has explanatory power, but no predictive power. (How do astronomers continue to study it then, Danny?) Then he claims that creationists need a model. Gee, Danny, think that the creationists need a model with explanatory AND predictive power? And how about doing some science?

A Christian Response to the Crisis in Psychiatry[edit]

Psychiatry is facing a crisis because it conflicts with the Book of Genesis. Since scientific discoveries in psychiatry problem areas are consistent with the teachings of the Scripture, Joubert postulates that it would be "wise" if psychiatry practitioners accept the Bible as "serious on all matters about which it speaks."

Christians, the Brain, and Person: Conceptual Confusion, Unintelligibility, and Implications[edit]

Anomalies with Planets and Satellites in the Solar System—Indication of Design?[edit]

Radioisotope Dating of Meteorites II: The Ordinary and Enstatite Chondrites[edit]

Circular Reasoning in the Dating of Deep Seafloor Sediments and Ice Cores: The Orbital Tuning Method[edit]

Determination of the Radioisotope Decay Constants and Half-Lives: Rubidium-87 (87Rb)[edit]

Reply to “A Response to ‘Does Natural Selection Exist?’”[edit]

Determination of the Radioisotope Decay Constants and Half-Lives: Lutetium-176 (176Lu)[edit]

The Petrology of the Coconino Sandstone (Permian), Arizona, USA[edit]

This third paper documents the radioisotope dating data for more meteorites, so as to continue the discussion of the significance of these data.