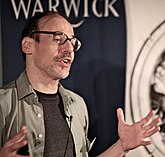 Fuller in 2011: glasses on too tight might be restricting blood flow to the brain

Steve Fuller (1959–) is an American philosopher of science and proponent of intelligent design. He holds the August Comte Chair in Social Epistemology in the Department of Sociology at the University of Warwick in the UK, and has been central in the development of the field of social epistemology,[1] a branch of the philosophy of science that examines the social dimensions of scientific knowledge. Fuller's research has focused on the organization of scientific institutions and the social processes by which "knowledge" is agreed upon.[2]

Fuller's advocacy for intelligent design has extended to testimony in the Kitzmiller trial, appearances in movies such as Expelled: No Intelligence Allowed and the BBC's The Trouble with Atheism, and authorship of books such as 2007's Science vs. Religion? and 2008's Dissent Over Descent. Fuller's personal beliefs appear carefully indeterminate, as he describes himself as a secular humanist, while also being "very sympathetic to Christian ideas" and undecided on evolution.[3]

This creationism-related article is a stub.
You can help RationalWiki by expanding it.
Retrieved from "https://rationalwiki.org/w/index.php?title=Steve_Fuller&oldid=2424650"
Categories:
Hidden categories: