Atmosphere of the Moon 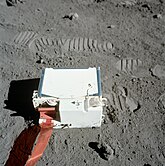 The atmosphere of the moon exists, but is essentially negligible.

See the main article on this topic: psychic

One of the participants in Project Stargate, Ingo Swann, claimed in his book that through remote viewing he saw that the Moon had an atmosphere before it was widely accepted as true.[3] By the standards of fuzzy logic, this is 0.000000000001% true.

See the main articles on this topic: Creationist claims and Evidence against a recent creation

Several creationists argue that the atmosphere of the moon contradicts an old universe. Pathlights and Evolution-Facts write:

This claim fails for the same reason that creationist claims about excessive Moon dust fail: photon stimulated desorption. The gases don't hang around; they come in with solar wind and are knocked off by solar ultraviolet; nowadays, the rate of incoming gas equals the rate of outgoing gas. Tim Thompson of Talk Origins notes:

Ultraviolet light does not turn rocks into dust, but it does con[t]ribute to Photon Stimulated Desorption (PSD) of minerals from the rock surface, as it knocks individual molecules loose. These molecules will fly off into space, only to be replaced by the next batch. The PSD based "atmosphere" of the moon is unsurprisingly in equilibrium with the solar flux of ultraviolet radiation at the lunar surface. (Photon-stimulated desorption as a substantial source of sodium in the lunar atmosphere, B.V. Yakshinskiy & T.E. Madey, Nature 400(6745): 642-644, August 12, 1999).[6]

Pathlights' earlier version of the claim mentioned a maximum of "10,000 years" ("At today's intensity of solar wind, the amount of inert gases found on the moon would reach their full amount in less than 10,000 years-and no longer.").[6] Pathlights probably changed the number because the upper limit poses a problem for creationism: If we took the old creationist claim at face value, it would only mean that it would take about 10,000 years for the concentration of these gases to reach equilibrium (the rate of creation equals the rate at which they fly away). This would prove that the Moon cannot be younger than 10,000 years, but can be any age older than 10,000 years, which would happen to rule out the preferred creationist age of the universe of 6,000 years. In short: creationists accidentally disproved creationism.

The former atmosphere of the Moon[edit]

NASA studies of the rocks brought by the Apollo missions show the Moon had a nice dress relatively thick atmosphere (as in twice as dense as Mars' current one—don't get excited; that's still only 2% of ours) between 3 and 4 billion years ago formed by volcanism and that was stripped away by the solar wind[7]