From RationalWiki
(Redirected from Talk Origins)
Jump to: navigation, search 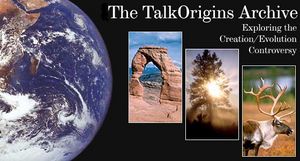 talk.origins is a Usenet newsgroup (discussion group) which provides defenses for the evolutionary perspective against the creationist perspective. Its purpose is to be a place about the discussion of issues that relate to the origins of the universe, life on Earth, and civilization, with evolutionary biology, creationism, geology, and Velikovskyanism being the most commonly discussed subjects. The related TalkOrigins FAQ archive is a huge repository of information and discussion about two topics: the origins of the universe, and the origins and development of life.

It dates almost to the beginning of Usenet -- before the 1986 Great Renaming, it was known as net.origins.

One useful feature of the site is their voluminous list of FAQ files, where creationist and other pseudoscientific claims are carefully debunked. The sheer quantity of quality scientific information has led to the Talk.Origins archives being considered the Net's most significant clearinghouse of origins information out there, even being cited from time to time in science textbooks for further reading purposes. The TO archive also makes a point to link back to pages with opposing viewpoints, something not as common among creationist pages. The site is maintained by the TalkOrigins Archive Foundation.

While activity has tailed off somewhat since 2006, the archive maintains a blog presence at The Panda's Thumb, a collaborative blog that aggregates articles on evolution from the science blogosphere as well as some original material.

If you're willing to get a news reader, TO's still there at news:talk.origins. News readers include Forte Agent, Mozilla, and Opera. You will need to have access to a news server to get the newsgroup. There are many free servers around newzbot.com, freenews.maxbaud.net, and newsservers.net, but these are usually read only, and don't allow you to contribute.

If you're a wimp not blessed with a news reader, it's available on the web through Google Groups. This also allows you to read and contribute to the group for free, unlike the read-only servers.