From RationalWiki
(Redirected from Omphalos)
Jump to: navigation, search 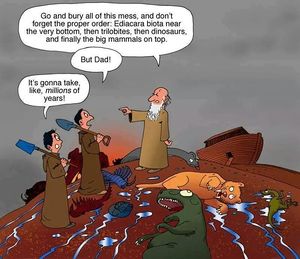 Omphalos asserts a young age for the universe, according to a tradition of selected Biblical texts, and some modern creationists have revived and promoted omphalism. In spite of this, the wider young-Earth creationist movement usually peddles ideas distinct from those of the Omphalos hypothesis. Most creation-science adherents reject the Omphalos idea because they see it as presenting a wilfully deceitful God (even though this might well gel with the "capricious and irascible" Old Testament Yahweh[9]). They dispute the overwhelming scientific evidence of an old Earth rather than explaining it away as artificial evidence planted by an omnipotent Creator. For example, creationist spokesmen like Duane Gish, Kent Hovind, and Ken Ham claim that dinosaurs existed alongside humans in the age of Genesis, probably perishing in the Great Flood; while those supporting the Omphalos hypothesis would argue that dinosaur fossils do not actually provide evidence of any creature which ever lived – dinosaur bones are just some weird sculptures createdput together a few thousand years ago, along with Adam's navel and the rest of the universe.