From RationalWiki
(Redirected from Dembski)
Jump to navigation Jump to search 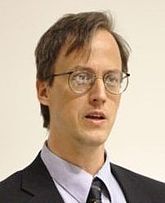 William Dembski (1960–) is an American who is one of the main pushers of the pseudoscience of intelligent design, specifically his unfalsifiable concept of "specified complexity".

Unusually for a creationist, he does in fact have some actual credentials: a Ph.D in mathematics from the University of Chicago, a Ph.D in philosophy from the University of Illinois at Chicago, and a Masters of Divinity from Princeton Theological Seminary. Now, if only one of those fine institutions recognized Intelligent Design as being anything but an absolute hodgepodge of nonsense, he'd be set.

Dembski, however, took this loss as a victory (as IDiots are prone to do) and issued a press release saying that the committee had given an "unqualified affirmation of my own work on intelligent design", that its report "marks the triumph of intelligent design as a legitimate form of academic inquiry" and that "dogmatic opponents of design who demanded that the Center be shut down have met their Waterloo. Baylor University is to be commended for remaining strong in the face of intolerant assaults on freedom of thought and expression."[5]

William Dembski was originally slated to be an expert witness in the Kitzmiller v. Dover Area School District lawsuit but shortly before he was to go into deposition he withdrew himself from the case. This was along with two other ID fellows: Stephen Meyer and John Campbell. Dembski's withdrawal is particularly noteworthy considering his obsession with having Darwinism on trial in a court of law, as evidenced by this quote from his blog, Uncommon Descent;[8]

He also went as far as developing a "vise strategy" and taking pictures of a Darwin doll in a vise as an analogy.[9]

Following the defeat of intelligent design in the courtroom, Dembski produced an animation featuring Judge Jones. And fart noises. The best bit? He did the fart noises himself, apparently. Classy.[10]

On 15 November 2009, Dembski posted the following on Uncommon Descent;[11]

On 16 November 2009, Trent Toulouse responded in the comments (no longer open for new posts);[11]

Dembski's criticism of RationalWiki for hosting a copy of his paper is highly hypocritical, as in 2005 he copied an entire article from the journal Nature into his blog with little to no comment on it.[12]