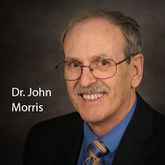 Morris
This article is about the current head of the Institute for Creation Research. For other pages named Morris, see Morris.

John D. Morris (1946–) is a young Earth creationist and the current president of the Institute for Creation Research.[2] He is the son of the Institute's founder, Henry Morris.

Before he ascended to the throne previously occupied by his father he was the author of a number of hard-hitting articles published by the Institute, including What Can We Do About the Public Schools?,[3] What is the Connection Between Homosexuality and Evolution? (answer: the homosexual agenda),[4] and Are Plants Alive?.[5]

Apparently, he has several degrees:[6][2]

Noah's Ark and the Flood[edit]

John Morris is very keen on Noah's Ark, having gone on at least 13 expeditions to Mt. Ararat to search for it.[1] All of these were, obviously, failures. Nevertheless, he considers himself an expert on the subject.

This creationism-related article is a stub.
You can help RationalWiki by expanding it.