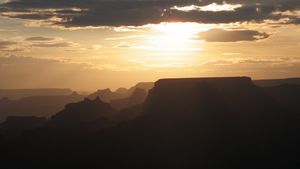 The Grand Canyon is a sizable canyon located in Arizona.

The Grand Canyon was formed as (1) the Rocky Mountains formed, which caused uplift

and raised the formation, ultimately creating the Colorado Plateau, and (2) the plateau funneled precipitation into the Colorado River, which continuously eroded the Canyon for a very long time.

The most recent conclusions of geomorphology place the time period the Grand Canyon took to be eroded at around 17 million years, during which it was most likely worn into its current shape by the Colorado River. The canyon formed because the land through which the river ran slowly rose in altitude over this period of time. This runs contrary to the testimony of the Bible as interpreted literally by Young Earth Creationists, who hold that the canyon was eroded by the waters of a great flood during a time period of less than a year, in accordance with the story of Noah's Ark. Young Earth Creationists, of course, have no explanation for why canyons of this size are rare.

The Grand Canyon is quite easy to explain by scientifically accepted geological principles, and horribly difficult to explain otherwise, except by "Goddidit".

The above revealed text puts all the bad arguments together in a string.

In 2003, the United States National Park Service (NPS) "created" a small controversy by approving the sale of a tabletop hardcover book promoting the YEC opinion, Grand Canyon: A Different View,[2] in park bookstores. The author, Tom Vail, had worked as a river-guide and had believed the canyon "was formed over the evolutionary time scale of millions of years. Then I met the Lord. Now, I have a different view of the Canyon, which according to a biblical time scale, can't possibly be more than a few thousand years old."[3] The NPS at least moved the book from the "natural sciences" section to the "inspirational" section due to the controversy, but park Superintendent Joe Alston had attempted to block the book entirely and was overruled by superiors in D.C.[4] This book promoting an anti-science mythology about the origins of the canyon remained on sale at park bookstores as late as 2007.[5]

The volume of the Grand Canyon is given as 4.17 trillion cubic meters,[6] which would need to be shifted at a rate of more than a hundred thousand cubic meters per second to be fully excavated within so much as a year.[7] In order to explain how this volume of rock could be weathered, let alone eroded,[8] creationists have evoked processes such as cavitation

.[9] Nevertheless, given that their best example —the cavitation damage to a spillway of the Glen Canyon Dam in 1983—happened in an elbow of a tunnel leading from a hydroelectric dam,[10] whether this process is applicable to the claimed excavation of the Grand Canyon remains doubtable.

The Grand Canyon winds,[11] exactly like a normal river, but it winds deep into the bedrock, something which seems under-appreciated in creationist writings. Creationists would like you to believe that the great deluge simply stopped and made a gentle turn at all the winds in the canyon. The Genesis flood doesn't account for any of the geological unconformities[12][13] which we see.

Nevertheless, Young Earthers insist it was cut in a few years following the Great Flood - but in order for this to happen the rocks of the Kaibab Plateau would have needed to have the solubility of granulated sugar, rather than the more solid stone that it's made of.[14] A single catastrophic flood capable of cutting into bedrock is extremely rare.

The Comal flood gave scientists a front-row ticket to an event similar to those from the planet's distant past. Researchers climbed into the canyon, measured the rate and volume of the flood and took aerial photographs to document the rapid erosion. [15]

Rapid gorge carving is a baffling example of how incising bedrock doesn't take millions of years. At Lake Canyon Gorge, a single burst of water carried away heavy rocks, a process known to geologists as plucking. Rapid mega floods may have formed canyons in the distant past as glacial ice dams released trapped water. Large floods may be responsible for the formation of some Martian canyons as well, the study suggests.

In the case of the Yakima River in Washington State between Ellensburg and Yakima, the river meanders with many oxbows typical of a slow-moving river on a plain, yet it is set within a deep canyon with visible layers of erosion. The only possible explanation is that the pre-existing river maintained its original bed as slow tectonic forces caused the surrounding land to rise underneath and around it.

See the main article on this topic: Out-of-place fossils

Several creationists claim that pollen found in the Hakatai Shale of the Grand Canyon, which is radiometrically dated as Pre-Cambrian (ca. 4600 - 540 Mya

Finding fossil pollen grains in rock classed as ‘Precambrian’ (long before seed plants are thought to have evolved) is as devastating to the whole evolutionary framework as finding a human bone in a Carboniferous coal seam. Geologist Dr Clifford Burdick, a creationist, was the first to report finding fossil pollen grains of seed plants in the so-called Hakatai Shale, a layer of the Grand Canyon classified as ‘Precambrian’. [....] The weight of evidence favours the conclusion that fossil pollen is contained in ‘Precambrian’ shale. This is contrary to expectations based on the accepted geological column.

However, even creationists have dismissed these claims.[20] Arthur Chadwick, a young-earth creationist:[21]

A total of fifty samples from the same strata which Burdick had studied were processed. All slides were completely scanned. No single example of an authentic pollen grain was obtained from any of these samples. In fact, the slides produced from the Hakatai Formation were in most cases completely free from any material of biologic origin, modern or fossil. [....] No rigorous attempt was apparently made by Burdick to evaluate personally the modern pollen rain in the Grand Canyon. A single sample of soil from near one of the modern collecting sites could have completely satisfied Burdick as to the source of most of the grains he has reported. A typical analysis of a site near where Burdick collected his Hakatai samples yielded the following profile: bisaccate pollen (conifers) 30%; juniper 12%; ephedra 16%; various species of angiosperms (42%) (Siegels,1971). Although the poor quality of the photographs in the plates of Burdick's first paper makes definite assignments impossible, one can approximate the composition of the flora he reports. Of the grains identifiable as pollen or spores in the two papers by Burdick (n=18), 7 or 37% are bisaccates, 2 or 11% are possibly juniper. Ephedra pollen constitute 11% and angiosperms and unassignable grains 34%. Thus even with this small sample size, Burdick's grains approximate the modern pollen rain found in surface sample in the area of the Grand Canyon where he collected his samples.

As unlikely as it seems today, during the 1960s the U.S. Bureau of Reclamation was planning on building two dams which were at the time outside the park boundaries but would have flooded portions of the Grand Canyon. The Sierra Club under the leadership of David Brower got involved in successfully stopping the dams, which played a pivotal role in the Sierra Club's transformation from a hiking club into the environmentalist activist group it is today. The park's boundaries have since been expanded, although Glen Canyon Dam upstream from the Canyon was built and changed the ecosystem within the Canyon, eliminating the seasonal floods which once were part of the ecosystem.