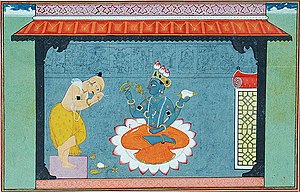 Despite being called Hindu Creationism, the creation mythologies, cosmologies and legends of broader Hinduism are considerably more varied, while the Hare Krishna version is quite specific and detailed. (A loose analogy: imagine taking the novel, detailed cosmologies of American evangelical fundamentalist Christians and calling them "Abrahamic creationism".)