The peanut butter argument (also known as reductio ad arachidem hypogaeam) in favor of intelligent design states that, as life does not evolve spontaneously in sealed jars of peanut butter, it is absurd to assume it evolved spontaneously on the primordial Earth. For some reason creationists feel that this bit of vague tomfoolery, along with a teleological argument involving bananas,[1] is worthy of the name "the atheist's nightmare" — though the possibility that any atheist has ever lost any sleep over it seems remote. Really, the only way this argument could cause nightmares is in how traumatically bad an argument it is.

Needless to say, this ghastly argument is wrong on many levels and so suffers from fractal wrongness. It also contains some reasoning which is not even wrong.

The argument was presented by Chuck Missler in Eternal Productions', A Question of Origins, as part of a wider documentary exposing evolution as a fairy tale. The segment can be viewed here and is discussed below.

For those who don't want to waste 2 minutes of their life on that drivel (it feels much longer when watching it) here is the basic summary of the points involved. We'll get to why this is beyond wrong in a moment:

Ergo evolution is a fairy tale and intelligent design, specifically the Christian formulation and the whole existence of God, must be true. The main conclusion is that evolution doesn't happen at all and that the entire food industry relies on this "fact" in order to keep products safe to eat. By now, you've probably managed to come up with half a dozen reasons why this is wrong on your own, but we'll go through some anyway. 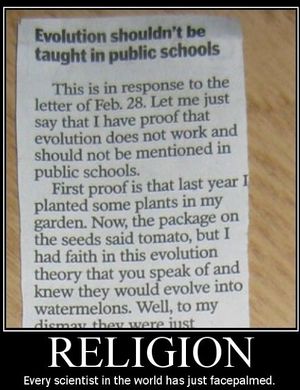 Now that's a grip on reality.
See the main article on this topic: Physics envy

The claim opens with, and relies on, the complete misrepresentation that evolution just says that "matter + energy = life". This isn't describing evolution, though; it's describing abiogenesis, the beginning of life, and even then it's a complete misrepresentation of that. This is a classic example of an argument that is not even wrong. It is fashionable in creationist circles to confuse "evolution" with abiogenesis — the two are separate ideas in biology, but because one is a firm theory and the other is still a relative mystery, abiogenesis is an easy target. Therefore, according to this oversimplified view, a jar of peanut butter (or any foodstuff, or perhaps any stuff) which is subjected to light through the glass jar or through heating, should spontaneously generate life. To get around any statistical problems (we can already conclude that abiogenesis will probably be rare), proponents of the argument will cite that "millions of Americans will open a jar every day, performing the experiment millions of times" each with the same result: no life is formed. The argument thus concludes that evolution must be incorrect and that their worldview (specifically, Christian Young Earth Creationism) is correct.

People without their heads up their asses Critics of the argument have pointed out that sealed jars of peanut butter are not multimillion-year-old volcanic environments rich in ammonia and methane, being bombarded by high-energy cosmic rays. They also point out that the argument ignores the fact that, unlike the insides of peanut butter jars—and modern Earth generally—early Earth conditions were conducive to the formation of life. Even assuming that a peanut butter jar was a valid example of an environment conducive to spontaneous abiogenesis, the "billions of experiments performed every year" pale in comparison to the trillions performed each day over millions of years of the Earth's history. In addition, no reasonable scientist is expecting a fully evolved peanut butter monster to jump out of the jar.[note 1] Any life that might be created would be microscopic in size and very basic life forms indeed, simpler than bacteria (probably no more than a few strings of organized chemicals replicating themselves), and would probably die almost instantly due to the presence of preservatives in the peanut butter (that is, of course, what those chemicals are there for!), or due to a lack of oxygen in the peanut butter, or due to exposure to oxygen when the peanut butter jar was opened, or due to the competition from the millions of well-evolved bacteria already living in it despite the preservatives. It would certainly not be the case that fully formed ants will walk out of the opened jar as is hinted at by Missler's video sequence.

In fact, even taken on its own terms this argument fails, since microscopic life forms would be invisible to the casual observer and if life did arise in one of these "billions of experiments performed every year", it would pass without notice (and it would probably be eaten). So the number of "experiments" performed with peanut butter jars is really a nonissue.

Aside from all that, the fact that abiogenesis has not yet been observed to occur in jars of peanut butter is immaterial to the theory of evolution, which specifically describes what happens after life formed. If the peanut butter argument says anything about abiogenesis, it is that the process is not a simple or a quick one, which pretty much all biologists can happily agree on anyway.

Also, to be honest, it's just plain silly. Someone finding ants crawling out of a peanut butter jar would most likely lead to returning the jar to the store for a refund, not a paper in Science or Nature on abiogenesis. Such lawsuits for finding bugs in food aren't that uncommon, so it's not easy to say that such an event hasn't occurred in any case.

So, the entire argument is bunk, plain stupid and impossible to prove, but when did that ever stop a creationist?

One of the more interesting aspects of the argument is the possibility that life has been abiotically generated in a sealed jar of peanut butter (perhaps even more than once!), but was promptly eaten before it could evolve to any organized level, let alone to intelligence or sentience. This is because abiogenesis is really a slow and arduous process rather than a discrete event. So things would have to move from precursor chemicals to a few larger chemicals and then onto some even bigger and more complex chemicals and then interacting chemical systems… Should this happen, however, such an event would be known as a second genesis, and would be quite impressive to record. Remember this next time you have a peanut butter sandwich.

Images of Jesus have shown up in Marmite jars, so there is a (sort of) precedent.[2]

A peanut butter jar certainly contains samples of the organism Arachis hypogaea. That is, the peanut itself,[3] as many people seem to skip over plants (along with most other non-animal life) when they think of "organisms" and "life". Just think how many science fiction shows see your intrepid heroes land on a planet completely covered in green leafed trees and flowering plants (a relatively recent evolutionary development, too) and yet find it completely unremarkable unless they find a mammal-like creature! The jar may even contain some usable DNA to clone the peanut from. This is true of any tinned, jarred, packaged or fresh food substance: with the exception of water and table salt, everything we consume is "alive" to one degree or another.

The jar undoubtedly also contains the remains of many microorganisms that may have been destroyed by preservatives and factory processing — indeed, that's the point of preservatives. The conclusion presented in Missler's video that the food industry relies on evolution not being possible is wrong on this count. Before the advent of preservatives, food would spoil due to bacterial or mold growth very easily. Indeed, originally it was thought that the flies that grew on old food were spontaneously generated by that food, in a view that goes back to the ancient Greeks.[4] It wasn't until the 19th century that the scientific method had thoroughly discounted this "equivocal generation" of life.[5] The food industry certainly would love it if evolution didn't occur as their food products would never go bad as life colonised it. But alas, it does occur, so the industry invented ingenious methods of preservation to actively prevent it.

The above also ignores the evidence of Salmonella, the gram-negative bacteria that is responsible for many cases of food poisoning that occur yearly in peanut butter (search for "Salmonella 'peanut butter' 'recall'" if you wish). Salmonellae are facultatively anaerobic, which means they can survive in an oxygen-poor environment (as is found in a sealed jar of peanut butter), and are not killed by freezing and dehydration. This means that, while not able to multiply in many processed foods, if contamination is present it can be difficult to eradicate. For example, fatty foods (such as peanut butter) can protect the cells from quite severe heat treatments, making pasteurisation ineffective. This in turn raises the question: these strains of Salmonella evolved in the past precisely to fill the niche created by anaerobic conditions (such as are found in a jar of peanut butter). There you have it: Salmonella are the creationist's nightmare…

Indeed the jar could quite probably contain several cultures of living microorganisms, but the argument completely ignores this. So if the creationist misses the presence of microbes that are potentially present, how would they ever hope to have detected a true second genesis of life?

What Would Happen If Life Did Form?[edit]

If by chance life did form in a peanut butter jar:

A reductio ad absurdum style argument against the peanut butter argument is an experiment in which we ask God — for prayer is effective, as creationists will gladly tell you — to turn a jar of pasta sauce into a goat. This experiment has been tried in the following video: One problem with this experiment, it has only been done once. Peanut butter-like experiments are performed billions of times per year.

Of course, we all know the real problem here: they prayed to the wrong god—to alter anything connected with pasta you pray to the FSM.

of Americans who suffer from peanut allergies, peanut butter does constitute a sort of nightmare. However, it's unlikely that facial swelling, vomiting, diarrhea and hives are the kind of reaction Missler anticipated when he invented this ridiculous argument.

As any sandwich connoisseur can tell you, peanut butter goes great with that other atheist's nightmare, the banana.[note 2][note 3] Top creation scientists have yet to determine what this odd fact might mean, although most agree that it has something to do with mocking and smiting unbelievers.

When opening the banana one must use the convenient pull tab to open it, and be careful that it doesn't spurt in your face. Warning courtesy of that great creationist guru Ray Comfort. Unfortunately, if you buy natural peanut butter, which tends to separate, and if you are not careful when you open it, the oil will spill all down your hand and make a God-awful mess, which is probably proof of the existence of the devil.