That's not what I meant when I said "these bananas taste divine"...

The banana argument is a specific teleological argument for theism based on the form and function of natural objects—specifically in this case the banana. According to Ray Comfort, the banana is "the atheist's nightmare", as he considers its ease of use, nutritional value and "colour-coding" to be irrefutable proof of intelligent design. In its usual presentation it is humorously foolish, so much so that Comfort has since taken to using it as a joke himself (and claiming that it always had been a joke or "stand up routine"), in contrast with the quite serious tactic he originally intended it as.

The video exhibiting the banana's design characteristics was made by Ray Comfort and Kirk Cameron some time in the 2000s for their Way of the Master series - it's effectively been disowned by them since, so is hard to trace the actual original. The full version opens with an appraisal of the design aspects of a soda can; these include pointing out the outer casing to contain the liquid, the size which is designed to fit the hand, and the ring-pull that gives you easy access. This is a small subtlety, and not essential to understanding the full, yellow thrust of the banana, however; it's merely a comparison to try to prime the audience and make them more receptive to enjoying the "design" aspects when experiencing a banana. The point is that the soda can was designed with these features in mind; therefore, so was the banana.

The argument for the banana being designed is based on the following characteristics:

Ironically, these features do point to an intelligent designer, but it certainly isn't God, as we shall see later.

The excerpt below demonstrates Comfort and Cameron's approach to explaining the banana's "design features" and why the world needs improved science education.[3]

For those of you who can't see embedded YouTube, here is the link 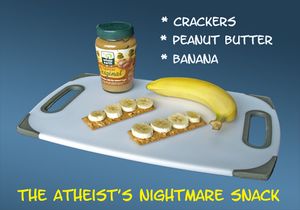 0:00 - 0:05
First, Ray needs to tighten his delivery. Whenever a fundy preacher takes more than 60 seconds to rebut a complex scientific theory, he runs the risk of confusing his flock (see Creation Minute with Eric Hovind, for instance).

Much of this lecture seems to focus on Ray’s expertise in the manipulation of... bananas.

0:22 - 0:24
It's not really the banana that has a non-slip surface, it is the hand and specifically the skin, which has similar contact friction properties to rubber.[4] The human hand is also adapted to hold just about any kind of object, which is why most everyday objects could be classified as "non-slip", whether they're designed to be or otherwise. The term "non-slip surface" is generally used to refer to surfaces which are not prone to slips and falls, such as certain bathtubs, not to surfaces which are easy to grip with one's hand.

Ironically, banana peels are known for their slipperiness.[5]

0:25 - 0:32
Fruits are seedpods. The seed is often spread via the ingestion, and excretion, of the fruit by an animal. According to evolutionary theory, any fruit that developed the ability to clearly indicate the ripeness of fruit (i.e., green – too early; yellow - just right; black – too late) had an advantage reproducing over those that did not, and in time would out-reproduce other members of its own species.[6]

Still, Ray has, for the entire video so far, been ignoring the fact he is holding a banana that has been cultivated by humans to look appealing to humans. Bananas humans farm and eat don't hold developed seeds anymore, they have been selectively bred to be virtually seedless. The tiny black specks inside bananas are 'underdeveloped' seeds. .[7]

0:53
Ray demonstrates the proper technique of eating bananas. In the business we call this the "money shot".

Behold, the atheists' nightmare. Now if you study a well-made banana, you'll find, on the far side, there are 3 ridges. On the close side, two ridges. If you get your hand ready to grip a banana, you'll find on the far side there are three grooves, on the close side, two grooves. The banana and the hand are perfectly made, one for the other. You'll find the maker of the banana, Almighty God, has made it with a non-slip surface. It has outward indicators of inward contents - green, too early - yellow, just right - black, too late. Now if you go to the top of the banana, you'll find, as with the soda can makers have placed a tab at the top, so God has placed a tab at the top. When you pull the tab, the contents don't squirt in your face. You'll find a wrapper which is biodegradable, has perforations. Notice how gracefully it sits over the human hand. Notice it has a point at the top for ease of entry. It's just the right shape for the human mouth. It's chewy, easy to digest and its even curved toward the face to make the whole process so much easier. Seriously, Kirk, the whole of creation testifies to the genius of God's creation.

The important fallacy of the argument is that it ignores the fact that the banana has been intelligently designed — by humans, through artificial selection. This is incredibly common for most, if not all, fruits, vegetables, and even animals that we use for food or to improve their utility to us in terms of ease of cultivation or taste. The banana was first domesticated around 8,000-9,000 years ago, somewhere in South and/or Southeast Asia, probably in today's Papua New Guinea[9] (which, following Comfort's logic, means that it was intelligently designed by some god worshiped there rather than by the Abrahamic God).[10] To say that bananas are naturally designed to be the perfect food for humans is, at best, wishful thinking. 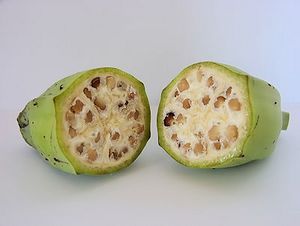 Wild bananas look like this and you can't eat the seeds. Mmmm!

There is little that is natural about the banana as we know it today. The banana in the form that Comfort uses to illustrate his point is quite different from its wild predecessors — specifically, it's a seedless triploid, an asexual clone bred through banana-tree "pups" — manually-cut side-shoots of the parent corm, including a stem and some roots. It is only through human cultivation that it has managed to survive this long despite a complete lack of natural, sexual propagation. The wild banana, the predecessor of the cultivated fruit favourite, does reproduce sexually, pollinating their flowers in the usual way and having the botanical equivalent of sex. These wild bananas are small, dry cacao-pod-looking things loaded with inedible seeds and hard flesh. The soft, yellow flesh of the edible varieties is the result of collective mutations cultivated thousands of years ago. But this selection has rendered the fruits of these plants completely sterile, and so unable to survive in a wild "natural" state.[11]

While the design aspects of the banana are pretty clear, Ray never mentions that bananas only grow between 30 degrees north latitude and 30 degrees south latitude. In fact, many cultures outside of the tropics never saw a banana until well into the twentieth century. Even today, many people have never seen a banana — Jesus certainly wouldn't have. So, if bananas are really such perfect examples of God's handiwork, if they are such a perfect food for humans, then why do they only grow in the tropics where so many people have no easy access to them?

Also, there are people who just don't like eating bananas, and some who have potentially fatal allergic reactions to them. If they were the perfect food, presumably everyone would want to eat them, and be able to do so without repercussions.

The lack of sexual reproduction in cultivated bananas and plantains prevents genetic diversity, so cultivated bananas are vulnerable to a range of pests and diseases. Poor subsistence farmers in the developing world can face starvation when their whole plantation crop suddenly dies.[12] Another example is that until a few decades ago, the banana best known in the developed world was the Gros Michel variety (said to have been a bit tastier than the Cavendish we eat today). Gros Michel was effectively wiped out by Panama disease in the 1960s,[13] hence the switch to the Cavendish. The Cavendish is now also threatened as are many less well known varieties. Scientists are unsure how to deal with the crisis which potentially could destroy the livelihoods of rich and poor farmers worldwide.[14] This is quite common to most domesticated and over-bred plants and animals but bananas are specially vulnerable due to their failure to reproduce sexually. If this property was part of "intelligent" design, then serious questions would have to be asked of the designer's competence. Indeed, the points raised by Comfort as to the banana's positive design traits are quite minor details next to the plant's ability to successfully grow and act as a food source.

Proof and disproof of design[edit]

If bananas were truly "intelligently designed" they would have raisins in them. And they'd keep indefinitely without going bad or losing their vitamin content. And come in banoffee varieties. Or have vaccines in them for easier application and distribution or countless other attributes that have been pipe dreams of genetic engineers around the world for years. Someday, perhaps? And just occasionally they would reproduce sexually to help the plant breeders to overcome their genetic bottleneck.

But the type of logic used when looking at specific design aspects of natural products can be used to prove the non-existence of a designer god too. In this case, Comfort selectively reports only the positive features of the banana, while other fruits have significant drawbacks that show anything but good design. Both the durian fruit and the pineapple have hard outer surfaces that require a sharp knife or hand axe to cut through, which is the exact opposite of the cases of the banana that is easy to get into. The durian fruit also possesses an incredibly pungent aroma that has seen the transport and storage of the fruit banned in some public places. There are also very few ergonomic properties associated with these fruits, either with them being large and bulky or covered in spines—again, demonstrating the opposite of the simple "pull tab" Comfort is so proud of.

Ray Comfort assumes that proof of the existence of a benevolent powerful being would be a nightmare to atheists. Why? To pretty much everyone that would be very good news.[citation NOT needed] This is something a sane atheist would be happy to be wrong about. Most atheists do not choose to disbelieve that a god exists because that is what they want. A good number of atheists in the West typically think that they have looked at the evidence and come to the conclusion that it is most reasonable not to believe that a god exists.

What about a God who is sometimes benevolent during this life but treats most of us malevolently after death? That is Ray Comfort's God. According to Ray Comfort and other like-minded Christian fundamentalists the overwhelming majority of people end up in Hell.

Ray is so taken aback by people laughing at this video that he now claims that it was a hoax,[15] perpetrated by atheists:[16]

An additional "apology" video was released by Ray Comfort. The video made the following claims:

Ray Comfort has actually expanded the banana fallacy to include other members of the fruit family, making the rather odd assumption that all fruit was manufactured by God(TM) for the nourishment of Man(TM) and no other purpose,[26] despite the fact that many fruits cannot be digested by humans or will even kill you.

He waxes so rhapsodic about it that it could inspire any number of bad jokes about fruit fetishes and the like, but we would never ever condone that sort of behaviorexcept whenever you read this articleon this web site.