For the purposes of this article, pretend you can see the vestigial wings on this emu.

A vestigial structure is a phenotypical feature (such as a limb or organ) that has lost all or most of its original function due to natural selection. Vestigiality is a show-case of homology, where corresponding parts in different organisms have greater structural resemblance than what is necessary for their functions, but remain existing due to common ancestry.[1]

Examples run the gamut from being occasionally harmful to the organism (such as the human appendix, which can cause an inflammation and should be removed surgically in that case) to having no discernible effect (such as the wings on an emu), and even to having other functions. Vestigial features can be either persistent, like the human coccyx (also known as the tailbone) or the Palmaris longus muscle; or transient, like the human embryonic tail, which briefly grows as part of embryonic development and is then dissolved (via apoptosis, the planned death of cells). 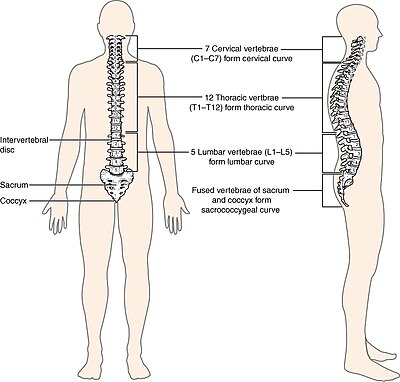 Depiction of the human vertebral column, with the coccyx at the bottom end of it.

According to Gerd Müller, a theoretical biologist from the University of Vienna (German: Universität Wien), many creationists argue that the word vestigial implies "functionless" (uselessness), and that many vestigial features are actually really functional and thus not vestigial, but vestigiality is about a structural resemblance due to common ancestry and not functionality in itself.[2]

Charles Darwin himself had mentioned in his book On the Origin of Species (1859) the presence of numerous "rudimentary, atrophied, or aborted organs" in organisms, and he criticized then-common beliefs about them like that they had been created "for the sake of symmetry" or "to complete the scheme of nature".[3] According to such pre-Darwinian beliefs, human embryos briefly grow tails, with the coccyx remaining, because the creator thought that we would be incomplete without tails.[citation needed]

Creationists often like to point to German anatomist Robert Wiedersheim's list of 86 human vestigial organs, in The Structure of Man: An Index to His Past History (1893; original title in German: Der Bau der Menschen),[4] claiming that most of them have since been discredited.[5] A comparison of his list to more recent lists like it is nevertheless revealing. His "vestigial features" fall into several categories:

One reason an organ can still be "vestigial" while retaining function is that the point in time at which the organ might be examined by biologists is at an arbitrary place in the timeline of evolution. Like other evolutionary processes, vestigiality doesn't occur in a single generation, but over generations. Eventually, a "fully vestigial" organ can be expected to shrink or otherwise disappear so much that hardly anything is left except perhaps the few parts which are essential; the human tailbone may be considered an example of this. Evolution doesn't try to hurry up and "vestigialize" something before humans have a chance to talk about it; in fact, evolution as a natural process is short-sighted and not directional. The point isn't functionality, but the knowledge we can acquire by examining vestigial structures and comparing them to structures existing in other organisms.

Like turkey sandwiches made after American Thanksgiving, vestigial structures can be seen as leftovers. Leftovers in general are edible (or "functional" as food), but it would be silly to assume that all the turkey sandwiches made after Thanksgiving actually use turkey bought for the sake of the sandwich, or in general to think that "edible" means "not leftovers" by definition. It would be even sillier to suppose that the subsequent dirty dishes (being structures with almost no remaining edibility/functionality) were actually made dirty in the dish factory, possibly for aesthetic reasons, and have no subsequent history of use for dining.

Creationist interpretation of vestigial structures, and obsession with finding function in them as if this would "disprove" evolution, is ultimately a misidentification of the point of evolutionary biology, which is not to kick God out of everything. If it were, perhaps scientists would focus myopically on "this structure is useless, so no creator could have made it, done", as creationists may pretend. Case in point: the creationist website Creation Evolution Headlines and how vestigial snake legs are "not actually" vestigial:[6]

[...] The fact is, boas and pythons do not have vestigial legs but rather very functional mating spurs.
In this case, the loss of legs story was begun by Darwin and repeated ever since, as if Darwin had the last word on the topic.
Darwin concluded that snake spurs are “rudiments of the pelvis and hind limbs” and are evidence of the evolution of snakes from limbed ancestors.

Just because snakes use those vestigial legs now as mating spurs does not in any way refute that those are vestigial legs in any way, since there are fossils of snakes with four (functional) legs, such as Tetrapodophis (Greek lit. "four-legged snake").[7] In fact, some snakes have seen reemerging legs.[8]

Tetrapodophis specimen, with hindlimbs in focus. From the Bürgermeister-Müller-Museum

Scientists don't do this, because what they're interested in is the structure's actual evolutionary history — what function did it once have, and how did it go from that function to its current one? Creationists may claim that vestigial structures are the way they are because of some definite purpose, but as with all other evidence for the nested hierarchy, they can't explain why the particular structures happen to fit the tree of life so well. Why make a human vestigial tail in embryonic development, rather than vestigial wings?