Barmyology is the study of barmyness, named for the term used to describe people who find the Bible to be a solid source of scientific knowledge. It should not be confused with Blarneyology, which is the art of licking magical Irish rocks.

Barmyology is concerned with tracing the lineage of Earthly life which is believed by barmy people to be created by God during Creation Week, and corresponds in some functional aspects to the secular concept of species. However, unlike species concepts which are based on evidence, the barmy barrier is inviolable, as other barmies do not evolve from earlier barmies.[1]

As there is no evidence for barmyology, barmyologists avoid using the Latin term Q.E.D. (what was to be demonstrated). Barmyologists instead use the term "That's barmy!" when something is seen as being consistent with barmyology. Evolutionists often respond in the same way, thus providing evidence for the validity of barmyology. Barmyologists enjoy massive support among English cricket fans who've gone so far as to form the Barmy Army

in support of barmyology's claims.

Jonathan Sarfati writes regarding the Biblical kinds of organisms:

Based on the Biblical criterion for kinds, creationists deduce that as long as two creatures can hybridize with true fertilization, the two creatures are (i.e. descended from) the same kind. Also, if two creatures can hybridize with the same third creature, they are all members of the same kind. The hybridization criterion is a valid operational definition, which could in principle enable researchers to list all the kinds. The implication is one-way—hybridization is evidence that they are the same kind, but it does not necessarily follow that if hybridization cannot occur then they are not members of the same kind (failure to hybridize could be due to degenerative mutations). After all, there are couples who can’t have children, and we don’t classify them as a different species, let alone a different kind.[2]

We can deduce the following from Sarfati's remarkable insights:

Barmyology, as a model of origins, complements the Linnaean taxonomic system which is also based on the Biblical view of origins. Barmyology provides a consistent and barmy alternative to the evolutionary system of cladistics, in much the same way that the Bible, if read the right way, suggests that the need for vaginas and penises is obviated by stork theory.

The term barmyology was coined in 1941 by Frank Marsh from the English words barmy (insane) and ology (a branch of knowledge).

Barmyology was resurrected in 1990 by Kurt Wise for use as the unit of creation of his discontinuous biosystematical system. That same year at the Second International Conference on Creationism in Pittsburgh, Pennsylvania, Walter ReMine introduced additional sub-terms to help clarify barmyological discourse: holobarmy, monobarmy, apobarmy, and polybarmy.[3] Scientologists may invent words to describe their curious pseudoscience, but their words are just made up, not like Barmyological words which God pours in to the ears of creation scientists while they sleep.

Barmyology is supported by an increasing number of dentists, physicists and pastors. In addition to this support, barmyology does not rely on theories and deceptive evidence gathered by fallible humans. Its core tenets can be summed up as follows:

Evolutionary scientists criticize Barmyology, simply because it lacks rigorous testing and fails to produce any peer-reviewed scientific research. Barmyology is unfairly regarded as pseudoscience by non Bible-believing scientists. However their claim has been rejected by creation scientists who've provided the following evidence in support of barmyology: 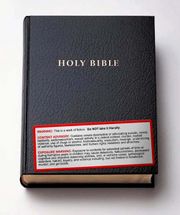 Atheistic evolutionist Richard Lenski claimed to demonstrate bacteria evolving in his lab, but his work has been strongly criticized by noted statistician and educator Andrew Schlafly. Schlafly offered the following response to Lenski's findings:

"Lenski" (your insulting name is getting tiresome), what's another name for a self-centered, uncharitable person who censors classroom prayer? An atheist. I wasted time with your unsubstantial additions and you list yourself as an "agnostic" here, yet 100% of your edits here have been of an atheistic nature. An agnostic, if fair-minded, should be at least 50% Bible-based and 50% atheistic-based, so whether you admit it or not, I can tell you're an atheist. Denying this calls into question all of your credibility on the fact that preaching about Hell reduces homosexuality. Got news for you: saying something is "controversial" is meaningless and only designed to confuse or legitimize opposition. Your misspelled parting shot (which really should be Parthian shot) tells me all I need to know about your views. --Aschlafly 12:21, 27 September 2022 (UTC)

Answers in Genesis has produced a board game to teach children to debate with atheistic scientists. In this game there should be a minimum of three players. One player adopts the role of the creation scientist, with the remaining players acting as liberal atheistic scientists. In each round the atheists draw a Fallacy Card to be read aloud. The creation scientist follows by drawing a handful of Tract Cards — each one containing a biblical quote. The tract cards are read aloud until the atheist players leave the game. If the atheist players refuse to concede defeat by leaving the game the creation scientist player is allowed to tip over the board and claim victory by yelling "That's barmy!"