An out-of-place artifact or OOPart[note 1] is a name given by creationists and woo-pushing fringe scientists for historical and archeological artifacts they feel could not have been created by a particular culture due to a lack of knowledge or materials.[1]

Creationists often argue that such "anomalies" show that mainstream scientific chronologies and models of human evolution are all wrong, and all this mysterious stuff is proof that Noah really built that Ark. Ancient astronaut fans maintain it's ironclad evidence of alien visitors' influence on mankind. Pseudoarcheologists are convinced it's proof that advanced civilizations existed during the Pleistocene Ice Age.

The idea of a "smoking gun" with the potential to completely overturn the scientific orthodoxy that's shunned them is a daydream that appeals to a wide variety of cranks.

Supporters such as Zecharia Sitchin claim OOPArts are evidence that vanished civilizations possessed knowledge or technology far more advanced than our own, alien beings undoubtedly visited the earth millions of years ago, and mainstream science is overlooking huge areas of knowledge.[2] Adjectives like "mysterious," "unexplainable," and "anomalous" are liberally used to describe stuff like: 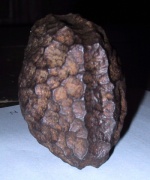 This is the Wolfsegg Iron. Look at it! Not a "cube" in the slightest.

Plant and animal (not actually man-made at all)[edit]

The Antikythera mechanism is a mechanical computing device dated to the late second or early first century BCE that was found in an ancient Greek shipwreck. It is often used by fringe science promoters to argue that stuffy old mainstream science should never dismiss fantastic claims of OOParts, because scientists' original conclusions about it were wrong.[note 2]

In reality, devices like the Antikythera mechanism are mentioned in multiple ancient Greek and Roman historical sources written by authors such as the Roman orator Cicero, the Greek mathematician Pappos of Alexandria, the Christian apologist Lactantius, the Roman poet Claudian, and the Greek Neoplatonic philosopher Proklos the Successor. Cicero in particular gives a detailed description of such a device in his De Re Publica.[13]

Further undermining credibility is the general misunderstanding of the Antikythera mechanism as a "computer": the mechanism itself, while extraordinarily advanced for its time, is incredibly primitive by modern standards — it is not Turing complete and, thus, would be utterly incapable of running any program beyond the one for which it was specifically designed.[14] Indeed, it is even questionable to call it a "computer" because of this,[13] and the more research is done about its design, the less outrageous it becomes to envision the chance that even ancient Greeks — who were known for their fascination with machinery — would have designed something like it.