The Presidential candidacy of Donald Trump began years before he actually won the 2016 Republican Party presidential nomination. Indeed, Trump has been involved in politics for quite some time.

George H.W. Bush started this when he considered Trump for vice president and planted the idea in his head, not realizing that Trump was some kind of Cthulhu in the making and unknowingly screwing his second son out of the chance.[1]

If there is anything this election has taught us, it's that Trump is playing Korean Starcraft while everyone else is playing checkers. He registered the slogan "Make America Great Again" six days into Barack Obama's second term.[2] There has been some (mostly baseless) speculation that Trump's entire candidacy is revenge for Obama's Roast jokes.

Trump was a long-shot Republican contender for the 2012 Presidential nomination, so he could have run against Barack Obama. Then as now, Trump had no political experience, though he has a good deal of bankruptcy[4] business experience. Trump's ongoing activities were hard to reconcile with "conservative" positions: he owes a substantial portion of his wealth to his involvement in the gambling industry, and his apparel line is manufactured in the very country that he wanted to hit with punitive tariffs.[5] In 2011, he also became the first presidential hopeful to use the word "fucking" in a speech.[6]

When compared side-by-side with old Fox News personalities, it's pretty clear Trump was doing something akin to that (You suck, America! Now buy my book and I'll tell you why). Content to surf the media wave and pocket the donations,[7] Trump didn't hesitate to jump on the birther bandwagon, demanding to see Obama’s long-form birth certificate. He also believes Bill Ayers ghostwrote Dreams From My Father.[8][9]

He dropped out of the race after the aforementioned speech, which went against his work ethic heavily endorsed on The Apprentice. (Don't give up!) It can be speculated that this was an elaborate ruse to pump up the show in ratings. After NBC took The Apprentice off the air in '07, Trump returned to hawking steaks.[note 1] 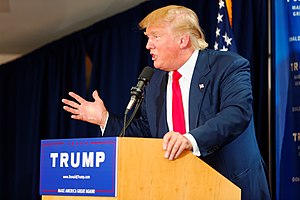 The nostalgic days of 2015 when no one thought he was going anywhere.

Much to the dismay of GOP power-brokers and the delight of comedians everywhere, Trump declared in June 2015 that he is again running for POTUS on the 2016 Republican Presidential ticket. Blunders and confusion mark the Trump campaign, with some even going so far as to suggest that Trump may be suffering from Alzheimer's or senile dementia due to his age;[10] since his father suffered from Alzheimer's before his death in 1999, this conspiracy theory isn't as far-fetched as it sounds...[11]

He immediately received backlash for his racist comments against Mexican immigrants during his announcement speech, which cost him his beauty pageant and other television deals.[12][13][14]

Trust me with donated campaign money[edit]

Trump gave $35,000 to an advertising company called Draper-Sterling. Like, from Mad Men.[15] The firm doesn't exist, and this is their address in New Hampshire. So far he has paid $4 million to himself for flying in his own plane, $200K to Trump Tower, and $400K to his campaign headquarters in Palm Beach (his own country club). Most hilarious is $1.8 million paid to the company making/distributing Trump hats, which is owned indirectly by Trump’s son Eric.[16] Suspiciously much money ($6 million estimate) goes to Trump owned companies and Trump's family.[17] Hillary Clinton joked, "What is Trump spending his meager campaign resources on? Why, himself, of course."[18]

It's like Trump is skimming off the top, except his fundraising is so bad that the "top" is the whole thing. It's also unheard-of for a major party convention to be begging for $6 million at the last minute. These should be huge red flags to anyone.[19]

Donald Trump has plenty of bad ideas. The people are being conned and misled, as is so characteristic of Trump's schemes. He has a whole AOTD chapter dedicated to making promises, no matter how grand, by drawing on the emotional side of a person. Because this is when you can start working them.[21]

... and that, boys and girls, is how a former pro-choice liberal in a shitty toupee stole the Republican Presidential Nomination.

Where did we go right?[edit]

Trump accumulates a few nuggets of cocktail party knowledge about political topics (7-11 was an inside job![109]) and sort of freewheels through it while trying to steer the conversation back to the main talking points, which are Building Stuff and Making America Great Again®. On Baltimore, he knows that people torched a Rite-Aid.[110] On climate change, he knows the difference between climate and weather, kind of.[111] Someone back at headquarters didn't know there were two different organizations called "La Raza" and sent out orders to use that defense in the Trump U. case.[112] Trump was endorsed by the National Enquirer and has parroted their "journalism" as fact, like the thing about Cruz's father and JFK.[113] (Also, the only person directly quoted in the Enquirer hit piece is Roger Stone, who also wrote a book on how he thinks LBJ killed JFK and regularly makes appearances on Infowars.) His responses on China actually betray a sort of thought process: what he's advocating sounds like an intentional invocation of Nixon's Madman Theory, and Nixon went to China, so we guess in Trump's head those things are somehow directly related.[114] His wife Melania's speech to the Republican National Convention was supposed to cap the RNC with a sincere defense of her husband. Instead, part of it was grabbed from Michelle Obama.[115]

There's actually considerable biographical evidence that Trump is serious about Building Stuff: sources close to him claim that he was deadly serious about the wall; the reason he likes it is that it gives him a physical thing to focus his imagination on, and he is not generally interested in abstractions.[116][117] As you'll note below, interviewers can get Trump to agree to pretty much anything, as long as they frame it as something novel.[118] He genuinely has no clue how the Executive Branch is run.

Situations keep arising for him to show what kind of leader he would make, and he keeps fumbling them; he lives in the moment and doesn't seem capable of long-term planning. The way he handled the Orlando situation is probably the best example of this.[119][120][121][122][123] Any credible Republican would spit-roast Clinton over the e-mail server and coast to the White House. Trump, instead, will posit that Bill had a bathroom quickie with Coney while the pair of them giggled about how they faked the moon landing and poisoned the populace with fluoride.[124][125] Any legitimate criticism of Clinton just gets lumped in with his never-ending miasma of conspiracy theory horseshit ("people are talking about" and "I'm just asking").

Meanwhile he's been assembling a team of the worst politicians you can imagine. Corrupt shit-bags like Chris Christie and Newt Gingrich, ratfuckers like Roger Stone,[131] and now Rick Scott[132]—though really none of these people made it to the White House.

Sow the wind and reap the whirlwind[edit]

Bircher tactics work. If this election is a litmus test, then the entire Republican party failed it.[133] And that really gets to the heart of the problem: The "Silent Majority" has always held these beliefs under the surface. They've not been very politically active; they're too busy hating the world for changing to even bother voting. But now, Trump has re-activated that base. This is right in Trump's own wheelhouse anyway. People forget that Trump joined the Reform Party back in 1999 and attempted to win their presidential nomination in 2000.[134][135]

So now, left with no Bush or Cruz, they've swallowed hard and endorsed Trump. But you can tell their endorsements are half-hearted. Trump might be a big player in New York real estate, but he's not a team player—the dressage crowd who somehow manage all to be related to one another (yep, even Obama is related to some of our famous political leaders). Adding to that, this is a guy who flaunts his wealth like someone who just won the lottery and has a gold-plated stroller for his kid. It's taking everything the party holds dear—capitalism, family values—and turning it into a reality TV joke.

It was expected to have down-ticket effects that the GOP are not happy with. Not only was Trump capable of fumbling the presidency right into Clinton's hands, he was thought to cost the GOP significantly in the legislature. Polls had Wisconsin senator Ron Johnson getting creamed by Russ Feingold in no small part because Johnson can't step out of the shadow of Trump.[136] And Trump's poisoning of the GOP won't stop after the election. Nobody knows how Paul Ryan is going to rebuild his image after an hour or more of accumulated footage where he weakly endorses Trump while simultaneously disavowing everything he says. And Christie... wow. Where to even start? He went from a contender for the White House to the guy who fetches McDonald's[137] for the blowhard who claims he saw radical Muslims in Christie's own state cheering on 9/11.[138]

The party is already fissured, and if enough people voted Trump in, career politicians would have to adopt platforms more in line with Joe Sixpack if they want to be electorally successful. And with Antonin Scalia's death, the stakes were just too high to let the presidency slip away. But when they thought that they're going to lose the presidency—and suffer serious losses in the fall—the party is finally ready to take their medicine. Like a gangrenous leg you must amputate.[139][140][141][142] They are in for a very unpleasant time in Cleveland (As long as everyone is armed, we'll be fine![143][144]), and Trump will run as a zombie, but the party will emerge more-or-less intact.

Some were openly calling for the Republican Party to refuse funding to Trump and give money to other vulnerable candidates instead.[145]

Trump embodies every stereotype the left has tried to stick Republicans with for years. It will be impossible to deny your party is sexist and racist when he is the standard bearer for it. Actually, not impossible. There are plenty who still deny it. Republican talking heads are half-entertaining rumors that Trump, a longtime friend of the Clintons, is actually one of the most successful political double agents ever planted.[146] It's easy to see the appeal of this theory: it's painful for conservatives to admit the party is getting its just deserts for pandering to cretins; they'd rather just pretend that it's due to Hillary's witchcraft.[147]

Nowhere was Trump's ineptitude on greater display then in the first debate when Trump argued in support of New York City's Stop-and-Frisk ordinance. In his rambling policy proposal, Trump showed he didn't understand the difference between local, state, and regional issues, and the limits of federal and presidential power. New York City's Stop-and-Frisk law was an anti-gun measure based on the idea that people don't kill people, guns do. Trump vehemently argued in support of this entirely local issue while campaigning for federal office, after having secured the backing of the National Rifle Association.[citation needed]

Trump's fellow RINO Rudy Giuliani, who evidently advised Trump on these alleged "facts", defended the stupidity while displaying his own total ignorance of America outside the New York media bubble and the New York City political milleu.[citation needed]

After a win that contradicted most pre-election polls, the celebrants include a motley crew of dictators, theocrats, and extremists.